WASHINGTON — More than 300 businesses, including Google, McDonalds and Walmart, are pushing the Biden administration to nearly double the United States’ target for cuts to planet-warming emissions ahead of an April 22 global summit on climate change.

In a letter to President Biden, expected to be released Tuesday morning, chief executive officers from some of the nation’s largest companies will call on the administration to set a new Paris Agreement goal of slashing the nation’s carbon dioxide, methane and other planet-warming emissions at least 50 percent below 2005 levels by 2030.

That is roughly what most major environmental groups want, and the corporate executives called the target “ambitious and attainable.”

Former President Donald J. Trump pulled the United States out of the Paris Agreement, eradicating emissions reduction targets set by the Obama administration that many environmentalists had seen as too weak. President Obama had pledged to cut national emissions 26 percent to 28 percent below 2005 levels by 2025.

With Mr. Biden promising to tackle climate change intensely, climate change activists are watching to see how much more ambitious his targets will be than those set when he was vice president. Mr. Biden, who returned the United States to the Paris Agreement on Inauguration Day, has said the United States will announce fresh targets for the Paris Agreement on or before a virtual summit of world leaders he is hosting around Earth Day next week.

According to two administration officials familiar with the deliberations, the target is expected to be a range that will include a 50 percent reduction in emissions.

Organizers of the business letter said they hoped such a message coming from the private sector — including electric utilities like Exelon and Pacific Gas & Electric, as well as dozens of companies based in Republican districts — would resonate strongly with Congress. Other signators include Target, Verizon and Philip Morris, the tobacco giant once considered a firm ally of the Republican Party.

The effort also underscores the delicate path corporate leaders are treading in the post-Trump era. Their decisions to break with Republicans on issues like voting rights and racial justice have rankled their traditional allies in the G.O.P. Pressing the Biden administration to aggressively combat climate change could further alienate Republicans, who have long fought emissions regulations as “job killers” that would make American business less competitive.

“I think this signals a major shift in the corporate community’s understanding of the urgency of climate change as a systemic financial risk,” said Anne Kelly, vice president for government affairs at the sustainability nonprofit Ceres, which organized the letter.

Republican lawmakers have given no indication they are likely to be swayed, but they framed their opposition as a defense of consumers, not businesses. 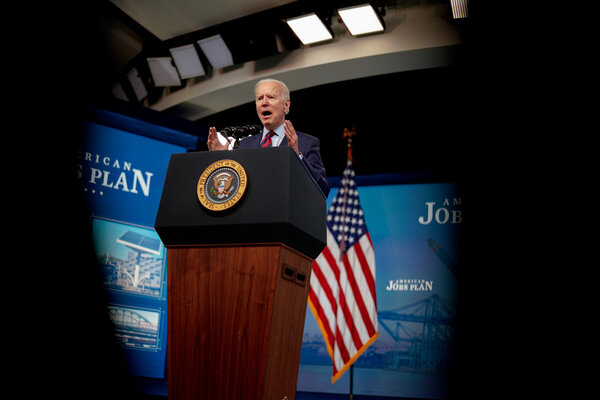 “The Paris climate agreement will result in increased energy costs for Americans while Russia and China increase greenhouse gas emissions,” Senator John Barrasso of Wyoming said in a statement. He predicted whatever target Mr. Biden announces will be “punishing.”

Patrick Flynn, vice president of sustainability for Salesforce, which signed on to the letter, said he hopes businesses will lobby Congress to support the Biden administration’s target.

“We know it will create millions of jobs, we know it’s a good thing for the economy, and we know if we do it right we can do it in a way that leaves no one behind,” he said.

Ralph Izzo, president and chairman of the Public Service Enterprise Group, a New Jersey-based energy company, said he is supporting the 50 percent target because he has seen the consequences of climate change in his state.

“It’s critical that we take significant action against the threat,” he said.

The corporate response is all the more remarkable because Mr. Biden’s plan for curbing climate change would be paid for in large part by raising corporate tax rates, a move sure to raise objections among at least some of the climate-conscious corporations. He also has called for a clean electricity standard and promised new regulations on the utility sector, automobile makers and oil and gas industries.

Mr. Flynn said his company has supported tax increases in the past and called Mr. Biden’s $2 trillion infrastructure proposal “a good investment” for the long term. Other companies that signed on to the letter sidestepped questions about the tax plan.

Ms. Kelley said she believes companies can “decouple” the commitments the United States needs to make to curb climate change with differences they may have with the administration around how to pay for it. “I think they see that as a separate set of negotiations,” she said.

Under the Paris Agreement, nearly 200 nations set their own voluntary targets for cutting emissions by 2025, including major developing nations like China and India. The rules of the accord do not punish countries for failing to meet the goals, but do require countries to set them.

The United States is currently less than halfway to its original goal.

Concentrations of atmospheric carbon dioxide continue to rise. According to a recent measurement taken at the Mauna Loa Observatory in Hawaii, concentrations recently topped 420 parts per million for the first time since levels have been recorded.