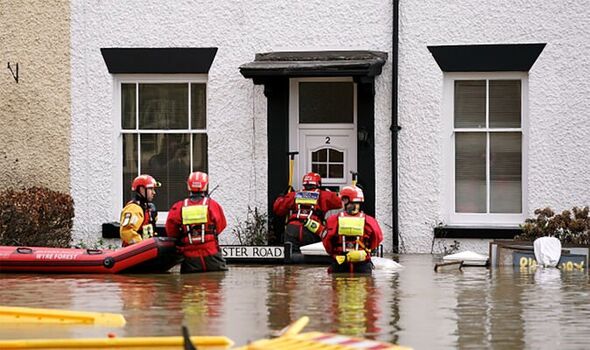 Gladys could bring more rain, 70mph winds, blizzards and snow. She follows Storms Dudley, Eunice and Franklin, all in the space of a few days.

In response, the Met Office issued several weather warnings although stressed we would not see anything like the recordsetting 122mph blasts from Eunice last Friday that blew the roof off London’s O2 Arena.

Yesterday residents in the flood-ravaged regions of England, especially around the river Ouse in York and stretches of the Severn in Bewdley and Ironbridge, continued to be evacuated.

Around 400 properties have been flooded, mainly due to rain from Franklin.

Last night the Environment Agency had 92 flood warnings in place across England – with two severe, meaning a risk to life, in Bewdley and Ironbridge.

Environment Secretary George Eustice was quizzed on the lack of permanent defences on the Severn at the National Farmers’ Union conference. He said: “It obviously is a tragedy for those who get flooded, but in the context of the 40,000 homes that we’ve protected through the flood defences we’ve got in place, you always have to keep that in mind.”

In Hereford, a boy risked his life by jumping into the swollen river Wye.

He was swept under a bridge before being met by workers from the Environment Agency.