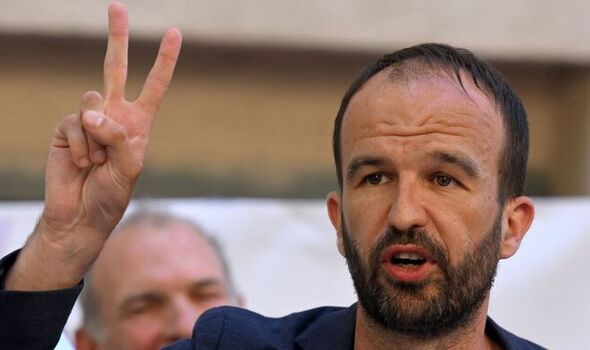 Manuel Bompard, a member of the French National Assembly, said young people were worried about global warming and that the art attacks were “provocative and striking”.

Works by John Constable, Ruben and Vincent Van Gogh have all been attacked. In Italy works in Florence and even in the Vatican have been targeted.

Across Europe art galleries have been targeted with the works of John Constable, Ruben and Vincent Van Gogh all attacked. In Italy works in Florence and even in the Vatican have been assaulted.

In October activists for Just Stop Oil hurled the contents of a tin of Heinz tomato soup over Van Gogh’s “Sunflowers” hanging in the National Portrait Gallery, London.

Mr Bompard, who represents LFI, a French left-wing party, was speaking as a guest on Audition Publique with Le Figaro Live on Monday.

He told the panel when it comes to extreme eco-protests: “This radicalism, I understand it.

“You have young generations who are worried about the impact of global warming. They have the impression that nothing is being done or that not enough is being done.

“So they use means of action that are provocative and striking.”

Mr Bompard’s view is at odds with the French Minister of the Interior Gerald Darmanin who denounced the ongoing protests as “eco-terrorism” in particular in regards to activists blocking a large water retention project close to La Rochelle in Western France.

The deputy leader of LFI, said he didn’t agree with the minister. He said: “We have to stop talking this nonsense. I don’t agree with the fact that the police are being attacked on this or that demonstration. But this is not eco-terrorism. It is absurd to say that word.

The French politician is not alone in his apparent support of eco-protesters. Yannick Jadot, a French Green MEP, said told Le Figaro he was initially “shocked” by certain actions in museums but that they were “a sign of the desperation of our youth.”

Speak on France Info Mr Jadot, who had previously said throwing soup on Van Gogh’s Sunflowers was “imbecilic”, seemed to mellow in his views.

He said: “I understand perfectly (these ecologist activists).

“We lost against liberalism and the dramatic globalisation that predates the climate”. And if he is not of the “generation” of the ecologist militants, Yannick Jadot said he believes that their actions are “the result of the despair of our youth”.