The first thing you notice about roasted cold noodles, a favorite street food in the far northeastern Chinese province of Heilongjiang, is that they are not cold.

We are not dealing here with a dish that will give you relief from swampy August days, like cold sesame noodles; or like Korean mul naengmyeon, a bowl of beef broth in which spaghetti-like strands of vegetable starch lie below shards of floating ice; or like buckwheat soba coiled on a bamboo mat beside their chilled dipping sauce, tsuketsuyu. Roasted cold noodles are meant to be eaten hot, right off the griddle.

They don’t much resemble noodles, either. In form, they are more akin to a rolled, filled omelet, as you will see if you watch them being made through the front window of Followsoshi, a stall inside a Chinese micromall in downtown Flushing, Queens. 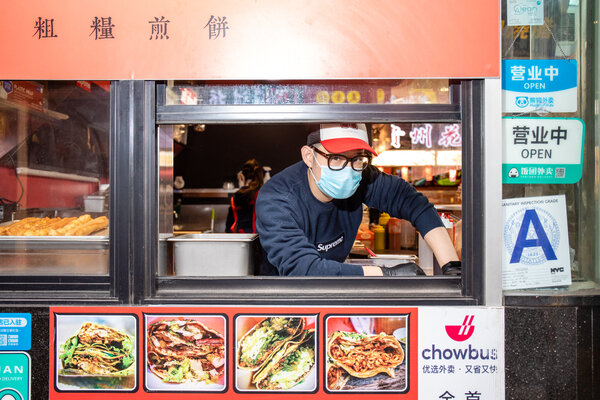 After you place your order at the counter, one of the cooks pulls a single “noodle” — a translucent whitish sheet, about six by eight inches — from a stack submerged in a bowl of water. It is ridged like a corn husk, which has occasionally led people to compare roasted cold noodles, not very aptly, to tamales. The indentations in the dough are stamped by a press. The idea seems to be to imitate the effect you would get if you left rows of wet, starchy noodles sitting side by side until they got cold and reattached themselves into a single, striated piece.

This sheet is slapped down on a crepe griddle and quickly oiled. Immediately, an egg is cracked over it and spread across the surface. Before the egg sets, it is spread with roasted chiles in oil and sprinkled with black and white sesame seeds and cilantro that embed themselves in the surface.

Then comes one of a number of fillings: soft braised pork with matchsticks of vinegared potato; or chopped crayfish in a garlic-forward seasoning of Sino-Cajun origins; or hot dogs, a standard filling in Harbin and other cities of Heilongjiang. In Flushing, the wieners are on the skinny side and go by the name “sausage king.” This aspiring monarch also features in “meat lover cold noodles,” together with sweet diced bacon, crab stick and a white sauce that Followsoshi calls simply “Parmesan.”

Scattered over the filling are chopped red onions and, in the manner of a Mission burrito, lettuce. The two long sides of the noodle are folded in toward the middle to make an envelope that is flipped so the seam is underneath. More chile oil is rubbed over the top before the whole envelope is sliced and transferred to a takeout container.

All this takes around three minutes. A full serving takes slightly longer to eat, depending on how long you spend admiring the way the ridges capture the chile oil so that, while each bite varies slightly, the smoldering heat is a constant. If it is your first time eating roasted cold noodles, you may expect that the flattop will leave the dough stiff and rubbery. In fact, aside from a few browned patches that are almost crunchy, most of it is soft and chewy, something like mochi.

When I am eating Followsoshi’s roasted cold noodles, I tend to believe that they are more interesting than the stall’s other specialty, jianbing. Their preparation is similar, although instead of noodle sheets a jianbing starts with crepe batter. Thin, crunchy layers of fried dough are piled on top of the filling before the jianbing is folded. 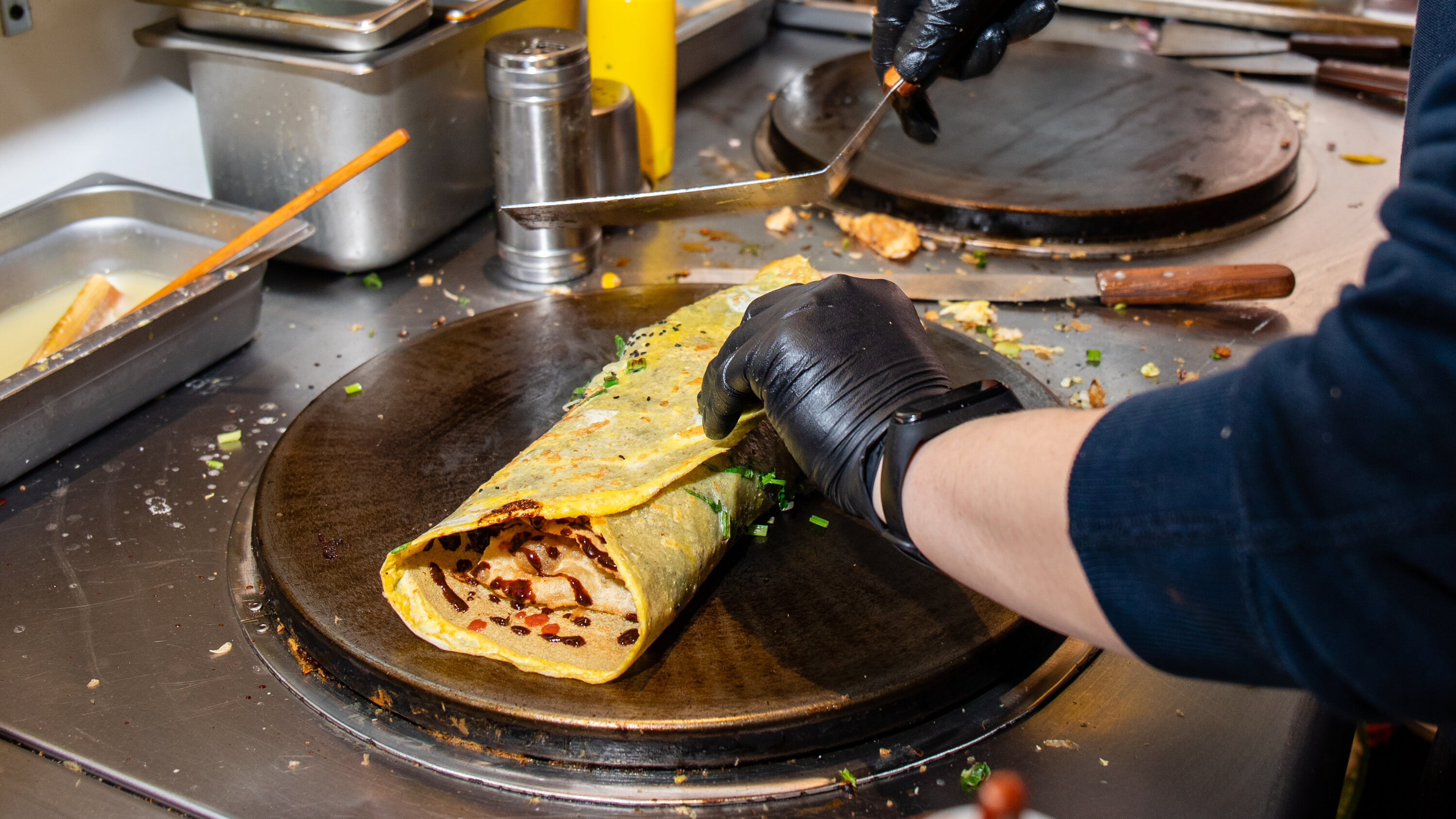 In truth, Followsoshi makes both dishes very, very well. It also offers some flourishes that help it stand out in the city’s rising jianbing industry. The standard batter is made from mung beans and produces a softer, more pliable crepe than the wheat batter used by some other makers. For a dollar more you can have a green spinach crepe, a red beet crepe or a soothingly plum-colored one made from purple rice. Although sausage king is offered as a filling once again, there are other choices that aren’t available with roasted cold noodles: chicken Parmesan, spicy ramen, and simple slices of roast duck with hoisin.

Followsoshi is the work of Yibo Han and Peng Li, two young entrepreneurs who were born in China and now live in Rego Park. Mr. Han is from Tianjin, one of two major centers of jianbing activity. Neither owner traveled north to study roasted cold noodles at the source in Heilongjiang; their research was limited to Beijing and other cities at lower latitudes. Both were struck by how similar the two preparations are, despite having different geographic, cultural and historical origins. (Jianbing has been around for centuries, while roasted cold noodles seem to have emerged some time in the last few decades.) They opened Followsoshi, their first food business, in November.

Compared with Manhattan’s Chinatown, where commerce began to go slack when Covid descended on China and has not really recovered, Flushing is relatively busy, in part because it caters to people who live nearby. The lines for orders at Followsoshi can spool out on to the sidewalk at midday, and in the morning. Jianbing is especially popular for breakfast.

Although there is no mistaking which two dishes are the stars at Followsoshi, other pleasures lurk on the menu: miniature puffy steamed baozi dumplings the size of figs, filled with minced pork; browned wheat crepes folded over scrambled eggs and Chinese chives; beef pies whose crust is seared on a griddle until it is marvelously crisp and flaky, like a well-done croissant; and rolling donkeys, spirals of sweet red-bean paste and springy dough dusted with ground toasted soybeans.

Followsoshi shares its space with three other food vendors. Only one has its name on the yellow awning over the entrance: Corner 28, selling roast duck, pork and other Cantonese staples. Another sells takeout sushi and keeps a refrigerator case stocked with brand-name sodas and bottled tea.

This may come in handy because Followsoshi’s beverage list is limited to plastic pouches of milk extracted from plants. The one called “multigrain soy beverage” is sweet soy milk thickened with powdered beans and grains to the consistency of pancake batter. Another is essentially sweetened oat milk with some of the oats left in it. Somehow it goes down much better than you’d expect of oatmeal in an IV bag.

What the Stars Mean Because of the pandemic, restaurants are not being given star ratings.