Darnella Frazier, 18, who filmed the incident, said Derek Chauvin “didn’t seem to care what we were saying” and had a “cold look” in his eyes. Another witness, Donald Williams, said: “I felt I had to call the police on the police [because I had witnessed a murder].” Prosecutor Matthew Frank played back Donald’s emergency call in which he identifies Chauvin, 45, by his badge number. The paramedics who had raced to the scene also had to tell Chauvin to “let up” so that they could treat Mr Floyd, they said.

Chauvin’s defence team are suggesting that the police felt threatened by the crowd. But both Donald and Darnella said they felt scared and threatened by the police. Jerry Blackwell, a prosecutor at the courthouse in Hennepin County, Minne-apolis, asked her: “Would you describe yourselves as an unruly mob?”

“No,” she said, adding the only person she saw being violent was Chauvin. Asked to describe what she saw as she approached Cup Foods in Minneapolis, she said: “I see a man on the ground and I see a cop kneeling down on him. He was terrified, begging, scared for his life. He was in pain.

“I heard George Floyd saying, ‘I can’t breathe, please, get off of me, I can’t breathe.’ He cried for his mum. He was in pain. It seemed like he knew it was over for him. I heard the crowd say ‘Get off of him’, ‘You’re hurting him’, ‘He can’t breathe’, but any time anyone tried to get close, they were quick to pull out the Mace [an irritant pepper spray].

Asked if she felt in danger, Darnella said: “Yes. Yes. I didn’t understand why they would do that or what we did to make them feel like that. 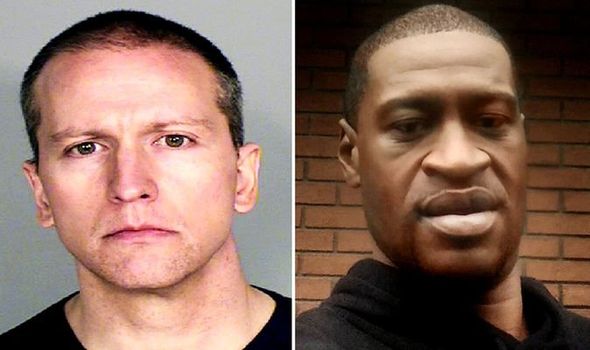 “I don’t understand why the Mace was even needed at all.”

Asked if Chauvin, who denies murder and manslaughter, let up, she said: “No, if anything, he actually was kneeling harder. He was shoving his knee in his neck. I feel like he was feeding off of our energy.”

A firefighter demanded “multiple times” for the police officers to take Mr Floyd’s pulse, she added. Chauvin was told to “let up” by the paramedics who had arrived to treat him, she said.

Donald also described how Chauvin continued to press his knee into Mr Floyd’s neck as paramedics struggled to find a pulse. The trial, which began on Monday with a vigil by George’s girlfriend Courtney Ross, continues.