Germany says up to 1,050 people part of group’s hardline wing as it adds Hezbollah to list of ‘terrorist’ organisations. 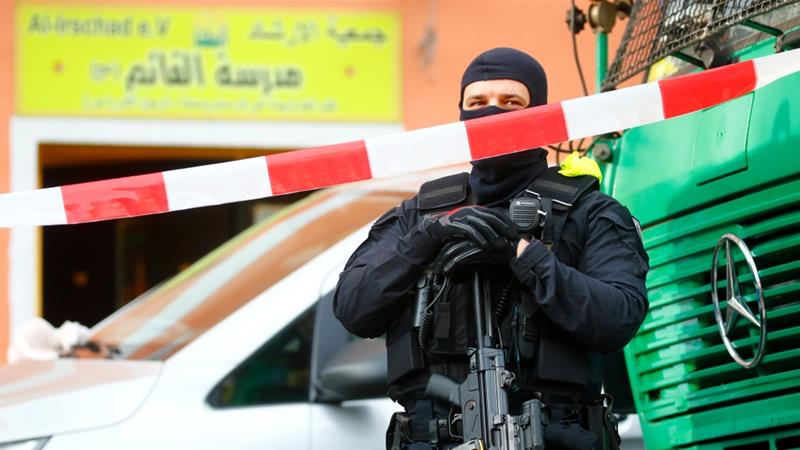 Germany has banned Hezbollah on its soil, designating the Iran-backed group a “terrorist” organisation, the Federal Ministry of the Interior said on Thursday.

Police conducted early morning raids in Germany to detain suspected members of the political group, which is based in Lebanon under the leadership of Hassan Nasrallah.

Security officials believe as many as 1,050 people in Germany are part of Hezbollah’s “extremist wing”. Hezbollah does not acknowledge the existence of separate wings.

Police searched mosque associations in the western state of North Rhine-Westphalia, Bremen and Berlin which they believe are close to Hezbollah, and the private residences of the leaders of each association.

The associations under investigation are suspected of forming part of Hezbollah due to their financial support and propaganda for the organisation, said the interior ministry.

“The activities of Hezbollah violate criminal law and the organisation opposes the concept of international understanding,” it said in a statement.

The move means that Hezbollah symbols are banned at gatherings and in publications or in the media. Hezbollah assets can be confiscated, but because it is a foreign organisation, it was not possible to dissolve the group, the ministry said.

Earlier this month, the United States offered up to $10m for information on Hezbollah commander Sheikh Mohammad al-Kawtharani, an associate of Iranian General Qassem Soleimani who was killed in a US air attack in January.

The group is already considered a “terrorist” organisation by the US, the United Kingdom, Canada, and Israel as well as the Gulf Cooperation Council (GCC) and the Arab League.

“I call on other European countries as well as the European Union to do the same. All the parts of Hezbollah, including the social, political and military wings are terror organisations and they should be treated as such,” he added.

As a legacy of the Holocaust, Germany feels a special responsibility towards protecting Israel.

Germany’s interior ministry said Hezbollah calls for the violent elimination of the State of Israel and questions its right to exist.

“The organisation is therefore fundamentally against the concept of international understanding, regardless of whether it presents itself as a political, social or military structure,” it said.

Until now, Germany had only outlawed Hezbollah’s military wing while tolerating its political wing, which is the current EU policy.

Hezbollah was established in 1982 during Lebanon’s civil war. It is now a major political party in the country, where it holds a majority in Parliament along with its allies.

Israel and Hezbollah fought a war in 2006.