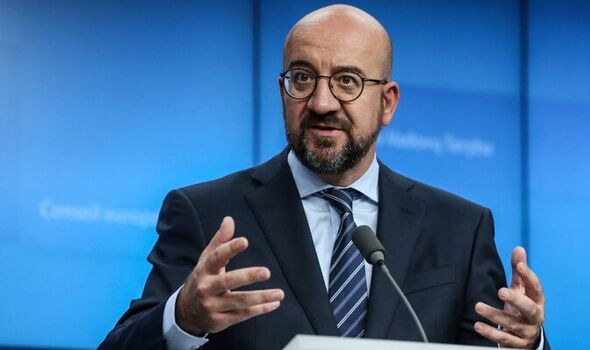 Under the new deal – thrashed out in a series of heated Brussels debates over the last two days following weeks of talks – the European Union will immediately block more than two-thirds of Russian oil imports.

This will rise to 90 per cent by the end of the year.

The initial ban will affect only oil which arrives by sea, following opposition from Hungary, whose economy relies on the oil from Russia that comes via pipeline.

So far, no sanctions on Russian gas exports to the EU have been put in place – although plans to open a new gas pipeline from Russia to Germany have been frozen.

In the UK, motoring organisations warned the ban will push petrol prices up yet further.

Charles Michel, European Council president, said the historic agreement would cut off “a huge source of financing” for the Russian war machine.

He also said Europe – in conjunction with Nato – now needed to start spending more on defence.

The compromise deal followed weeks of wrangling, with Hungary the main opponent.

Mr Michel told reporters the deal was reached when it was finally agreed there would be “a temporary exemption for oil that comes through pipelines to the EU”.

Ursula von der Leyen, President of the European Commission, said in practice the scope of the ban would be wider, because Germany and Poland have also volunteered to wind down their own pipeline imports by the end of this year.

Referring to the pipeline supplying oil to Hungary, Slovakia and the Czech Republic, she said: “Left over is around 10-11 per cent that is covered by the southern Druzhba.”

But the European Council will revisit this exemption “as soon as possible”.

She added that the war in Ukraine was a “stark reminder” of the need for additional investment in defence.

The block on Russian oil is part of a sixth package of punishing sanctions approved at a summit in Brussels, which all 27 member states have had to agree on.

Russia currently supplies 27 per cent of the EU’s imported oil and 40 per cent of its gas. And the EU recompenses Russia around £341billion a year in return.

But the deal to block two-thirds of Russian oil imports only came after President Zelensky made an impassioned personal plea to European leaders to show unity.

In an address from Kyiv via video link, he urged: “All quarrels in Europe must end, internal disputes only encourage Russia to put more and more pressure on you. It is time for you to be not separate, not fragments, but one whole.”

The long-awaited ban on Russian oil imports was initially proposed a month ago by the EC, which develops laws for member states. But resistance has held up the sanctions.

Hungarian PM Viktor Orban said a total ban would have been an “atomic bomb” for his country’s economy.

Other landlocked countries, such as Slovakia and the Czech Republic, have also asked for more time due to their dependence on Russian oil. Bulgaria has likewise sought opt-outs.

Here, the RAC warned of further rises in prices on petrol forecourts.

Simon Williams, RAC fuel spokesman, said: “The EU’s decision to ban the majority of Russian oil imports will cause the barrel price to go higher still, spelling yet more misery for fuel prices in the UK.”

The Kremlin’s goal for its special military operation in Ukraine is unclear.

The initial invasion was justified by Vladimir Putin’s belief that the Russians and the Ukrainians were one and the same people.

After the collapse of the USSR, Russian nation-building switched to forming a single nation around language and culture.

Thus, Ukrainians who speak Russian must become part of a single Russian nation.

There are many parallels with the Nazi concept of lebensraum with all ethnic Germans under the Reich. Putin’s initial Ukrainian strategy had its roots in Nazism.

One difficulty is that the objectives of Putin’s war are fluid. It began as a bid to demilitarise and de-Nazify pro-Western Ukraine.

This has shifted to gaining territory, namely the Donbas region, which is a very 19thcentury approach to geopolitics.

But now a country’s status is not so much about territory but the role it plays in global flows of people, knowledge, expertise, money, hi-tech components and raw materials. Putin’s illegal war has severed Russia from these flows.

It will never regain its former position within the hierarchy of global networks.

So far the war has highlighted major weaknesses in Russian military intelligence, capacity and capability. Putin has demonstrated that his investments in military capacity have failed.

One of his paranoias is his fear of Nato expansion but one of the outcomes has been Nato expansion, enhanced investment in military capability and an increase in collaboration between members.

Putin’s war has forced countries to cut their economic dependence on Russian oil and gas. Deciding no longer to supply gas to Finland, Poland and Bulgaria is another failure.

There were no military reasons for this and it will lose income. And the Nord Stream 2 gas pipeline was a major geopolitical and environmental threat.

Putin’s war has ensured that this pipeline will never be used and the result is a major loss to Russia, its big beneficiary.

Another outcome has been the withdrawal of foreign direct investment from Russia such as the exit of McDonald’s.

It could be argued this is the de-Westernisation of Russia but also shows loss of global status.

When I think about Russia, I reflect on ballet, classical music, literature, Peter the Great, Catherine the Great and the rise and fall of the USSR.

I also think about a country that does not protect its citizens and its long history of crimes against humanity and climate crimes.

Russia should now be associated with filtration camps in which refugees are strip-searched and threatened, as well as the shooting and bombing of civilians and civilian infrastructure, including hospitals and schools.

The USSR saw itself as a superpower and Putin wants Russia to reclaim this status. However, he has failed. Russia is now isolated. It is now impossible for Russia to re-establish and enhance its role in global flows.

Every square metre of Ukrainian territory that Russia captures contributes to the country’s failure in global networks.