The bus began sliding down the hill before the driver lost control and the vehicle swerved into a nearby bus and blocked the road. The driver regained control before the bus hit a parked car at the bottom of the hill. Members of the public who captured the moment can be heard swearing during the tense moment. 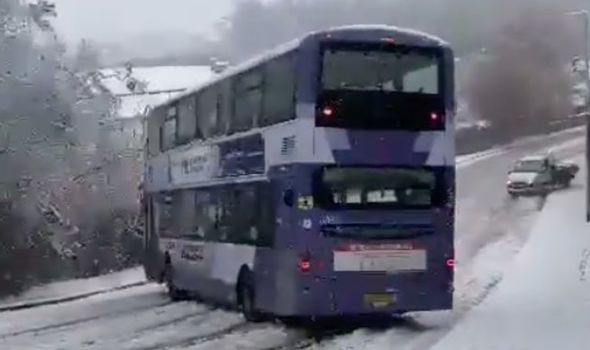 A member of the public in the video can be heard saying: “It probably seemed like a good idea coming down here. Not the best idea.

“I think if I had been in that I would have been reversing long before he started coming down.”

The Met Office had issued an amber snow warning for parts of Scotland and northern England overnight into Thursday, with up to 11cm falling in the Perth and Kinross area and 5cm in Cumbria by 9am, and large accumulations elsewhere.

A further yellow warning for snow and ice remains in place until 9pm on Thursday, stretching from the northern Highlands to South Yorkshire.