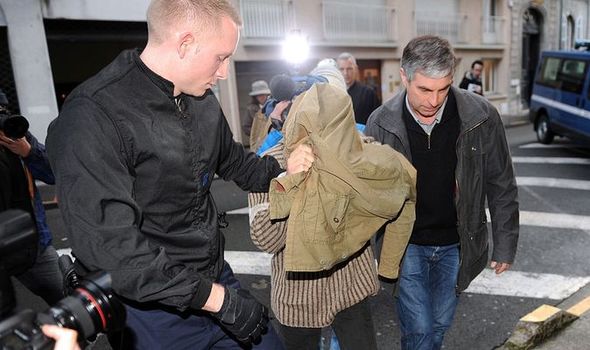 Jeremy Rimbaud, who briefly escaped from custody, previously murdered a farmer before cooking his heart and tongue with white beans. The 34-year-old attacked a woman in Toulouse in France on Wednesday. A source with knowledge of the incident, quoted by MailOnline, said: “She was absolutely terrified.

“The lady was out walking her dog close to the centre of the city when Rimbaud struck.

“He punched her in the back of the head and then hit her with a stick, before passers-by intervened, and chased him off.”

They added: “It was only later that she was told that she had been attacked by a known cannibal.”

The attack took place at around 10pm on Wednesday.

Rimbaud was then returned to the secure psychiatric unit, where he had been held since 2011.

His first victim was 90-year-old Leopold Pedebidau, a farmer from Nouilhan, west of Toulouse, who he killed before chopping up his body.

Prosecution papers said that Rimbaud “cut out his victim’s tongue and a piece of his heart, to cook them with white beans.”

He attacked Mr Pedebidau just two weeks after he returned from fighting in Afghanistan in 2011, according to The Local.

He reportedly took ketamine during his tour of duty, like many other French soldiers, to give himself courage.

He was only caught when he attempted to kill a second farmer.

Rimbaud, who later became known as “The Cannibal of the Pyrenees”, was sentenced to life in prison for murder.

According to prosecution papers, seen by the MailOnline, he was “diagnosed with schizophrenia and was suffering from post-traumatic shock linked to his fighting in Afghanistan.”

A local police spokesman said on Friday that the “convicted killer has been returned to custody.”

He said an enquiry was underway to try and find out how he escaped.