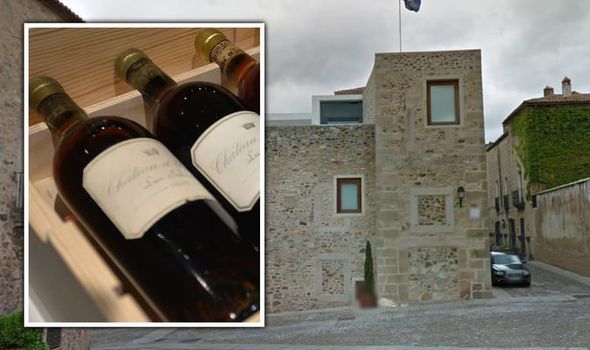 The thieves targeted the Atrio Restaurant Hotel in the city of Caceres, western Spain. Thought to be an English-speaking man and woman, the pair arrived late at the hotel and attempted to book a room.

One of the pair is alleged to have entered the wine cellar on the hotel’s ground floor before taking 45 bottles of wine including the gem in the hotel owners’ collection, including the Chateau d’Yquem 1806.

The hotel was bought by the owners in an auction more than 20 years ago at Christie’s London.

The theft occurred in the early hours of Wednesday morning.

Jose Polo, one of the two owners of the hotel restaurant, told local press: “One of the people we believe did this reserved a room and dined with another who arrived later on and asked for something from the kitchen in the early hours of the morning.

“When the kitchen staff took the plates to the room one of them took advantage to enter the wine cellars and take the bottles in a bag.”

In an open letter to the press Mr Polo and his co-owner Tono Perez noted their struggles during a “terrible pandemic”, and mourned the loss of their collection.

They added: “More than a theft it’s as if they’ve forced entry, gagged us and beat us. We feel an immense sadness today.”

The pair continued: “These 45 bottles were very special and have been bought over the past decades with great effort.

“What pains us most is the loss of Chateau d’Yquem from 1806, which was about to die two decades ago and which we saved with one of the most beautiful stories of the wold of wine ever told.

“That bottle was part of our personal history, almost part of me, of the history of the hotel, but also of Caceres, of its citizens and all the lovers of the world of wine.

“It is THE bottle, impossible to substitute, 215 years of the history of Spain, wars, times of peace and construction.”

The pair finished their letter with the words: “Our hearts are broken but we are ready to carry on fighting.”

The owners were also quoted as saying they wouldn’t have sold the Chateau d’Yquem ‘for a million euros’ because of its sentimental value.

Nearly 40 of the other bottles of wine taken were reportedly expensive Romanee-Conti.

The full cost of the bottles taken has not been officially revealed but has been estimated at around £1.7 million.

Spanish police officers have not yet made any official comment.

Little detail has been published about the man and woman suspected of carrying out the theft, other than that they were “professionals”.

They also checked out of the hotel around 5am on Wednesday before the crime was discovered.