Hurricane Laura is threatening to bring an “unsurvivable” surge to the US gulf region according to forecasters. The storm is now an “extremely dangerous” Category Four storm and more than half a million people have been ordered to evacuate. Express.co.uk has compiled a list of the 14 churning systems which are travelling around the world right now.

Hurricane Laura has developed into an “extremely dangerous Category Four hurricane” according to the NOAA’s National Hurricane Center.

As of 1pm CDT (7pm BST) the Laura was located at latitude 27.3 north, longitude 92.5 west which is around 200 miles south-southeast Lake Charles in Louisiana and Port Arthur, Texas.

The storm has maximum sustained winds of 140mph and is moving northwards at 16mph.

Laura is expected to approach the Upper Texas and southwest Louisiana coasts this evening and move inland within that area tonight.

The centre of Laura is forecast to move over northwestern Louisiana tomorrow, across Arkansas Thursday night, and over the mid-Mississippi Valley on Friday. 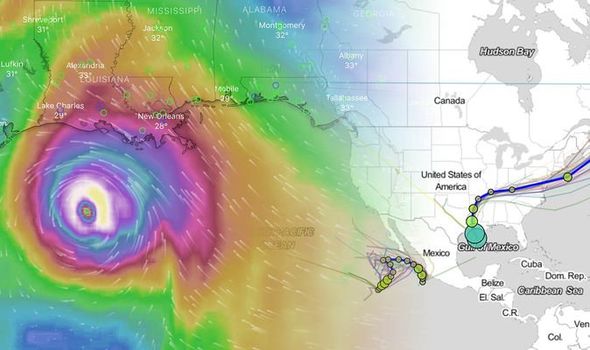 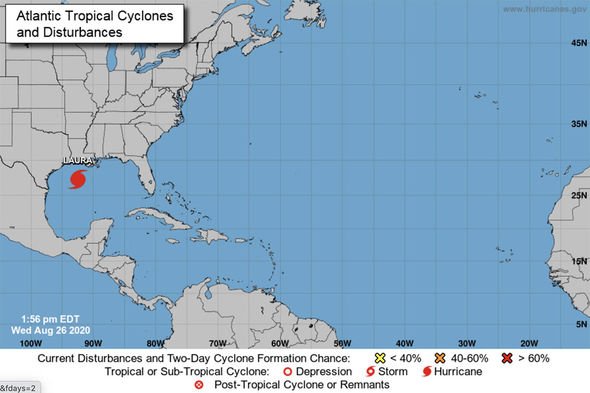 There are currently several storm warnings and watches in effect.

There is a storm surge warning in effect for Freeport Texas to the Mouth of the Mississippi River.

There is also a Hurricane Warning is in effect for San Luis Pass Texas to Intracoastal City Louisiana.

In addition, a Tropical Storm Warning is in force for Sargent Texas to San Luis Pass and East of Intracoastal City Louisiana to the Mouth of the Mississippi River.

There is a Storm Surge Watch is in effect for the mouth of the Mississippi River to Ocean Springs Mississippi and at Lake Pontchartrain, Lake Maurepas, and Lake Borgne.

A Hurricane Watch is in place for the east of Intracoastal City to west of Morgan City Louisiana. 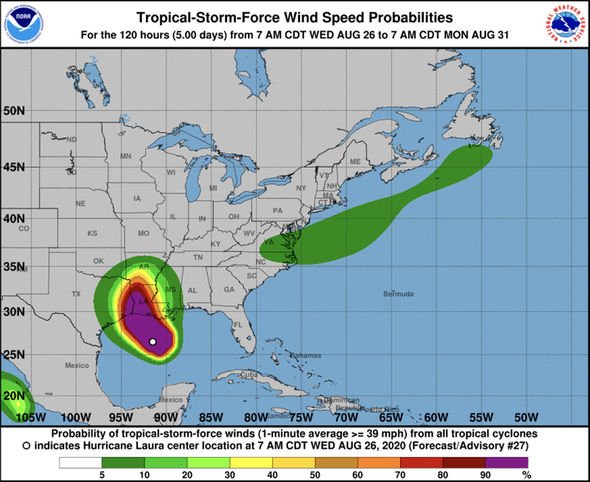 There are three other systems moving around the globe.

The first is tropical depression 13E which is a poorly organised depression drifting east-northeastward offshore the coast of southwestern Mexico.

Tropical depression 13E is packing maximum sustained winds of near 35mph with higher gusts and a slight strengthening is forecast during the next 48 hours.

The second system is tropical depression 14E which has winds of nearly 35mph with higher gusts.

Slow strengthening of the system is expected and the depression is expected to become a tropical storm by Thursday.

A typhoon is also currently moving in the northwest Pacific: Typhoon Bavi.

Typhoon Bavi is on course to hit the northwest coast of the Korean Peninsula on Thursday at daybreak.

Bavi is the eighth tropical storm of the 2020 Pacific typhoon season. 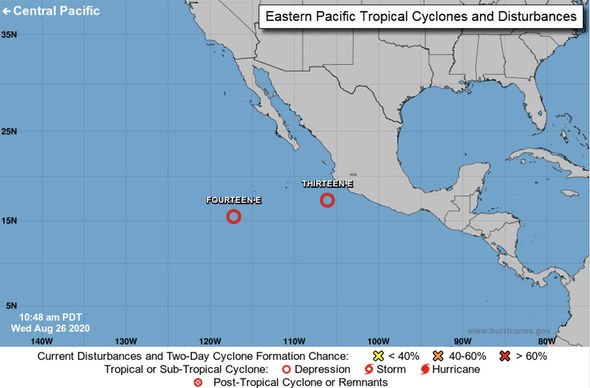 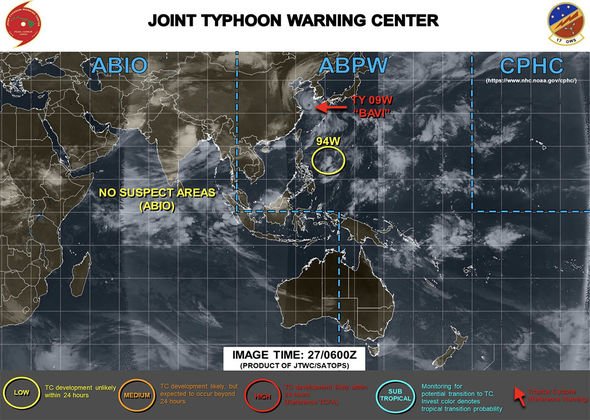 Forecasters are also tracking several other disturbances including the following:

Hurricane trackers are also monitoring two other storm risks one in the Atlantic and the second in the Northwest Pacific.

The risk in the Atlantic a westward-moving tropical wave is expected to move off of the west coast of Africa tonight.

Environmental conditions do not appear to be conducive for development as the wave crosses the eastern Atlantic over the next few days, but conditions could become more favourable for slow development of the system as it reaches the central and western tropical Atlantic early next week.

The second storm risk is moving through the Northwest Pacific which is an area of convection moving northwest of Yap.

Currently, there is a favourable environment with good equatorward outflow and warm sea surface temperatures being offset by moderate vertical wind shear.

There are maximum sustained winds up to 17mph (15kts) and the potential for the development of a significant tropical cyclone within the next 24 hours remains low.