Package offers free food for 800 million, but activists say few of them are registered with scheme or have documents. 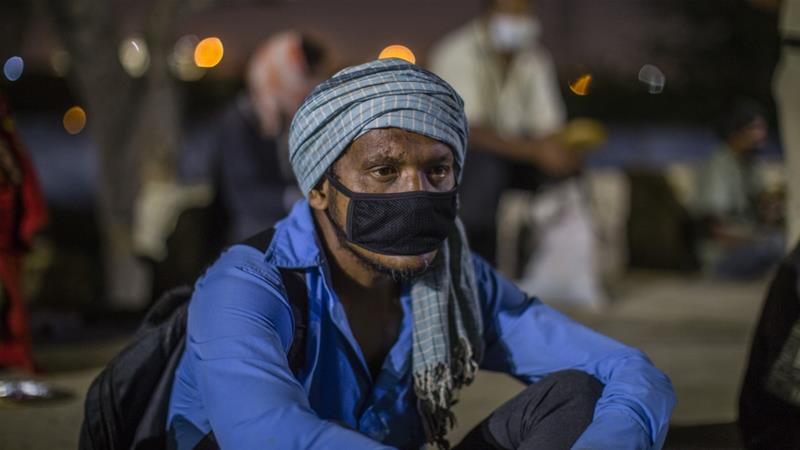 Tens of millions of Indians stand to see few benefits from a coronavirus relief package worth $22.6bn, economists and food rights activists say.

Although India’s relief package promises free food for roughly 800 million beneficiaries, economists and activists say few of those in need are registered with the federal food welfare scheme, or have the documents needed to secure benefits.

“I would argue for universal [food] coverage of rural areas and urban slums in most states for the duration of the crisis,” said economist Jean Dreze, who has co-authored books on hunger with Nobel laureate Amartya Sen.

India’s lockdown will push many more people into poverty, and the government must ensure free food reaches everyone in need, Dreze told Reuters news agency, estimating that a tenth of a population of more than 1.3 billion lacks food security now.

The scenario spells catastrophe for 32-year-old Karan Kumar, a struggling day labourer in the capital.

Living in cramped quarters at a construction site where activity has been halted by a harsh three-week lockdown to stem the spread of the virus, Kumar has been without work for days, unable to earn his daily wage of about $4.

“I’m not suffering alone, my family is suffering with me,” said Kumar, who relies on his earnings to support his wife, five children and ageing parents in his home state of Bihar, one of India’s poorest.

“My wife calls up and urges me to get home anyhow,” said Kumar, one of 1,500 workers at the site. “She says that even if we are hungry, we will be hungry together.”

Without provisions for the poor, India could be facing a full-blown humanitarian crisis, especially if the government decides to extend the lockdown, experts say.

“Massive numbers of people will be pushed back into poverty,” warned Nikhil Dey, who runs farm rights group Mazdoor Kisan Sangathan (Association of Workers and Farmers).

The Indian government is monitoring the situation “very closely” and will ensure no one goes without food, said a top government official involved in the government food welfare scheme, who sought anonymity in line with government policy.

While millions of migrant workers fled cities on foot for their homes in villages after Prime Minister Narendra Modi imposed a lockdown from March 25, others with homes hundreds of miles away, like Kumar, could not return.

Modi, who has said stringent measures were necessary to tackle the virus that has killed almost 200 people and infected nearly 6,500, apologised last week for the hardship caused to the poor.

The International Labour Organization says welfare measures such as food aid are critical for the roughly 380 million people who work in the informal economy, which includes everyone from vegetable sellers to cobblers.

Activists say India is in a comfortable position to give handouts to the needy as mounds of rice, wheat and sugar in brimming granaries leave little space for new season harvests.

At the New Delhi construction site, Kumar and other labourers sleep on narrow bunks in small, fly-ridden rooms, depending on erratic supplies of food from a nonprofit.

“We eat the food here because we have no other choice,” said Kumar. “But what about my children? Who will support them?”