JAKARTA (Reuters) – Indonesia has a significant deficit in hospital beds, medical staff and intensive care facilities as health experts warn that it is primed to become a new epicentre of the coronavirus pandemic, according to data reviewed by Reuters. 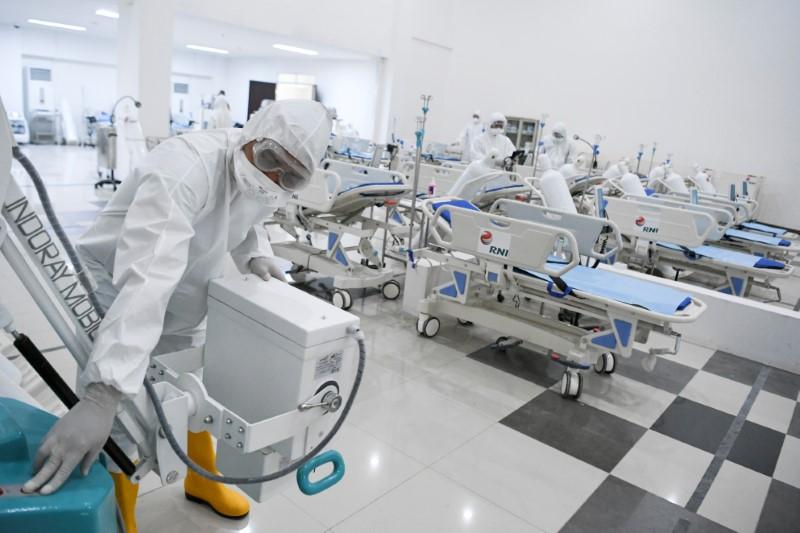 Health experts say Indonesia faces a surge in coronavirus cases after a slow government response masked the scale of the outbreak in the world’s fourth most populous country.

Indonesia has recorded 686 cases but the data is seen as understating the scale of infections because of a low rate of testing and a high mortality rate. Indonesia has reported 55 deaths, the highest in Southeast Asia.

A study by the London-based Centre for Mathematical Modelling of Infectious Diseases released on Monday estimates that as few as 2% of Indonesia’s coronavirus infections have been reported. That would bring the true number to as many as 34,300, which is more than Iran.

Other modellers are projecting that cases could rise to as many as 5 million in the capital, Jakarta, by the end of April under a worst-case scenario.

“We have lost control, it has already spread everywhere,” Ascobat Gani, a public health economist told Reuters. “Maybe we will follow Wuhan or Italy. I think we are in the range of that”.

The government says the impact of the virus will not be that severe.

“We won’t be like that,” said Achmad Yurianto, a senior health ministry official, referring to comparisons with outbreaks in Italy and China.

“What’s important is that we rally the people … they have to keep their distance.”

Indonesia’s health system compares poorly with those in other countries hit hard by the virus.

In 2017, the WHO found Indonesia had four doctors per 10,000 people. Italy had 10 times more, on a per capita basis. South Korea has six times more doctors.

Yurianto said with proper social distancing measures there should not be a need for a large number of additional beds and that medical staffing was sufficient to tackle the virus.

However, Budi Haryanto, an epidemiologist from the University of Indonesia, told Reuters: “The hospitals are not ready to support the potential cases. Treatment will be limited.”

Although only hundreds of people have been hospitalised for coronavirus, doctors told Reuters the health system was already under strain. Many health staff lack protective equipment, with one doctor telling Reuters how she had to wear a raincoat because there were no coveralls available.

In a sign of poor infection controls in hospitals and clinics, eight doctors and one nurse have died from the coronavirus, according to the Indonesian Doctors Association.

In Italy, where there have been 6,077 coronavirus deaths, 23 doctors have died.

‘WE BRING OUR OWN MASKS’

Staff at one hospital on the outskirts of Jakarta had threatened not to come to work on Tuesday because of a lack of protective equipment, another doctor told Reuters.

“We bring our own masks, our own suits that may not be of standard quality,” the doctor told Reuters, asking not to be identified because of the sensitivity of the matter.

“My friends, one by one, catch the virus,” he said, holding back tears.

The government said this week it had sourced 175,000 new sets of protective equipment for medical staff that would be distributed across the country.

A new emergency hospital has been opened in Jakarta with an eventual capacity to treat up to 24,000 patients. Doctors and medical staff have been promised bonuses and 500,000 rapid testing kits have arrived from China.

Indonesia’s health system is highly decentralised, making it hard for the central government to coordinate its response across a sprawling archipelago of some 19,000 islands spanning 5,100 km.

“If you are critically ill and you can get into ICU and get put on a ventilator, most people should survive,” said Archie Clements, a public health specialist from Perth’s Curtin University, referring to people infected with the coronavirus.

“If you don’t get them into ICU and get them on a ventilator, then they will die.”

A study in the Critical Care Medicine journal in January, which compared intensive care beds for adults in Asian countries using 2017 data, found Indonesia had 2.7 critical care beds per 100,000 people, among the lowest in the region.

(This story corrects name of Budi Haryanto in paragraph 14)