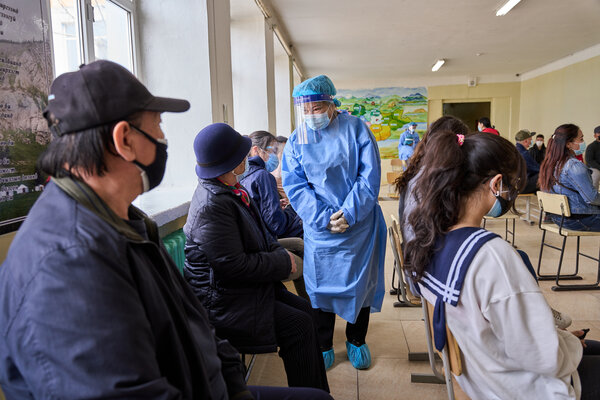 Coronavirus cases are surging in Mongolia, where more than half the population is fully vaccinated, prompting a new focus on the effectiveness of its main vaccine, developed by China’s Sinopharm.

Mongolia reported 1,312 new cases of the coronavirus on Wednesday as the country’s total infections neared 70,000, almost all recorded since January. New daily infections have risen more than 70 percent in the past two weeks, according to a New York Times database.

The landlocked nation has emerged as an outlier in the global scramble for vaccines among developing nations, securing enough doses for its eligible population thanks to its strategic location between Russia and China — two vaccine manufacturing giants with global ambitions. Mongolia has signed deals for 4.3 million doses of the Sinopharm vaccine and one million doses of Russia’s Sputnik V vaccine, although only 60,000 Sputnik doses have arrived so far.

Chinese vaccines, such as the ones made by Sinopharm and another company, Sinovac, use inactivated coronaviruses to trigger an immune response in the body. They have been shown in studies to be less effective than the vaccines developed by the pharmaceutical companies Pfizer and Moderna, which use newer mRNA technology.

Sinopharm’s vaccine initially came under scrutiny because of a lack of transparency in its late-stage trial data. The vaccine faced more questions after the island nation of the Seychelles, which relied heavily on Sinopharm to inoculate its population, also saw a spike in cases, although most people did not become seriously ill.

“Inactivated vaccines like Sinovac and Sinopharm are not as effective against infection but very effective against severe disease,” said Ben Cowling, an epidemiologist and biostatistician at the University of Hong Kong School of Public Health.

“Although Mongolia seems to be having a spike in infections and cases, my expectation is that there won’t be large number of hospitalizations,” he added.

And some virus variants may spread fast enough to cause concern even in countries where much of the population has vaccinations effective against them: Britain is dealing with a rise in cases linked to the Delta variant, despite having more than half of its adult population fully vaccinated, largely with shots from AstraZeneca and Pfizer.

Still, the wave of infections has raised questions in Mongolia over why the government relied on the Sinopharm shots instead of a vaccine proven to be more effective. It came as Mongolians headed to the polls on Wednesday to vote for president, the first election since the constitution was amended to limit the president to one six-year term. The prime minister is the head of government and holds executive power.

A year ago, Mongolia was among the few countries in the world that boasted no local coronavirus cases, but an outbreak in November changed that. A political crisis ensued and protests over perceived mishandling of the outbreak led the prime minister to resign in January.

The new prime minister, Oyun-Erdene Luvsannamsrai, has promised to revive a flagging economy and end social distancing restrictions that have hurt businesses. A fresh wave of cases could threaten this pledge.