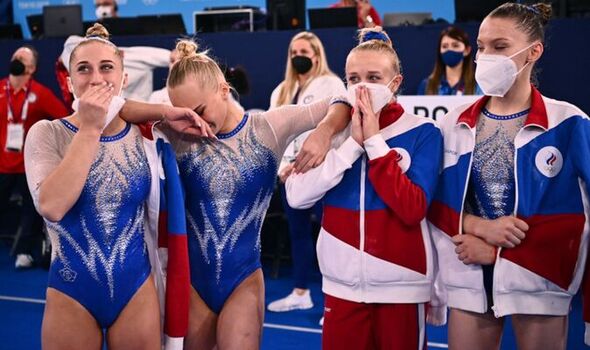 Last week, Russian President Vladimir Putin launched his invasion of Ukraine. According to the interior minstry of Ukraine, at least 352 Ukrainian civilians have been killed so far as Mr Putin began his invasion of the former Soviet country. These victims include 14 children.

Now, the IOC has sensationally called for Russia and Belarus to be banned from all international sport.

In a statement, they said: “In order to protect the integrity of global sports competitions and for the safety of all the participants, the IOC EB recommends that International Sports Federations and sports event organisers not invite or allow the participation of Russian and Belarusian athletes and officials in international competitions.”

This comes as MP Damian Green urged Russia to be banned from competing in the World Cup this year.

FIFA has come under immense pressure to ban Russia from the World Cup after last week’s invasion of Ukraine.

Under a series of “initial measures” agreed by the FIFA council on Sunday, next month’s World Cup play-off between Russia and Poland would go ahead but at a neutral venue and with no spectators.

Russia would also be forced to go by the name “Football Union of Russia (RFU)” in an echo of the punishment imposed on the country at the Olympics.

But the Polish FA have firmly stated their team will refuse to play against Russia.

The Czech Republic has joined Sweden and Poland in saying they will boycott any game against Russia in football’s World Cup play-offs.

The Telegraph reports that the British Government will likely launch a concerted effort with other nations to force FIFA President Gianni Infantino to issue a ban.

Conservative MP Damian Green, a member of the Digital, Culture, Media and Sport Committee, said: “I think that is unbelievably feeble and taking the example of the International Olympic Committee (IOC) that allows Russia, despite all of the doping scandals, to participate in games as long as they are called the Russian Olympic Committee (ROC).

“It’s exactly the same cop out that the IOC went for.

“I think it’s just unacceptable in the current climate.

“I hope other countries follow the example of the English FA and more importantly the Polish FA in saying we won’t play them.

“That essentially dares FIFA to say ‘ok we will award games to Russia’.

“That would mean the World Cup wouldn’t be played, I would very much hope that other countries that have qualified wouldn’t participate in a World Cup with Russia.”

Asked if Russia should be banned, Mr Green responded: “Yes, a country that wages war against another country can’t be allowed to have normal sport.

“That would be the kind of symbolic gesture that would bring home to the Russian people that their government is driving them away from normal life and the big events in international sport.

“It’s pretty shameful for FIFA that they have not come to that conclusion when F1 instantly decided that the Russian Grand Prix couldn’t take place.”

While FIFA has so far allowed Russia to continue playing, UEFA stripped the country of its right to host the 2022 Champions League final, which was due to be held in St Petersburg, but will now take place in Paris.

The Russian Grand Prix, due to take place in September, has also been cancelled.

On the situation between Russia and Ukraine, FIFA released a statement.

It read: “First and foremost, FIFA would like to reiterate its condemnation of the use of force by Russia in its invasion of Ukraine.

“Violence is never a solution and FIFA expresses its deepest solidarity to all people affected by what is happening in Ukraine.

“FIFA calls again for the urgent restoration of peace and for constructive dialogue to commence immediately.

“FIFA remains in close contact with the Ukrainian Association of Football and members of the Ukrainian football community who have been requesting support to leave the country for as long as the current conflict persists.

“We unanimously approved the decision that the Czech national team will in no case enter the event against the selection of Russia in the qualification round of the World Cup 2022.”