Sara Mardanbigi and Edgar Rico, the owners of the genre-bending Austin, Texas, restaurant Nixta Taqueria, grew up more than 1,000 miles apart. Their families immigrated to America from opposite corners of the world. But both found comfort in the same food: rice pudding.

For Ms. Mardanbigi, 33, the treat took the form of sholeh zard, an Iranian rice pudding usually made with saffron, rosewater, cinnamon and cardamom, and often served for religious holidays. (In Farsi, “shol” roughly translates to loose, and “zard” means yellow.) She looked forward to Shab-e Yalda, the Persian celebration of the winter solstice, when her family and the small community of Iranian-Americans living in Springdale, Ark., exchanged large batches of sholeh zard. Ms. Mardanbigi would eat it for breakfast for weeks on end.

Mr. Rico, 32, savored his grandmother’s cinnamon arroz con leche. An enterprising retiree, she sold the dish to locals near her home in Salinas, Calif., and saved some for Mr. Rico, who lived in Visalia. Though he grew tired of the Mexican food at home, “I was a sucker for dessert,” he said. Arroz con leche reminded him of Cinnamon Toast Crunch cereal, but with deeper flavor.

So perhaps it’s not surprising that the sleeper hit on the menu of the couple’s restaurant is a Mexican-meets-Iranian rice pudding that’s utterly unique in taste — warm and smoky with spices, slightly sour with strawberry powder and suffused with grains of rice that reveal the slightest chew. The dish is not just delicious, but emblematic of their growing confidence in using the restaurant to explore connections between the two cultures, with food that’s rooted in tradition but aims to surprise. 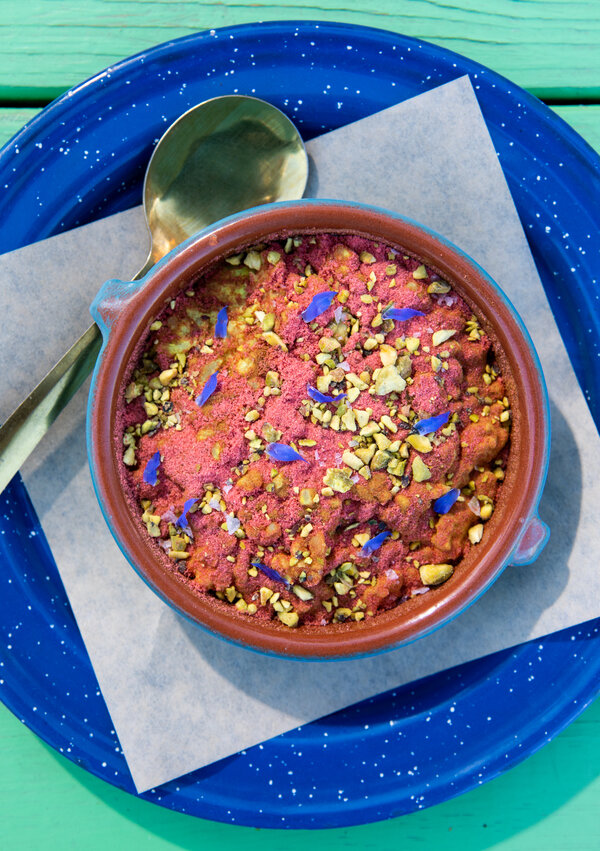 Rice pudding wasn’t part of their original vision. Mr. Rico, the chef, who worked at acclaimed restaurants like Son of a Gun and Trois Mec in Los Angeles before spending time in Mexico to learn regional cuisines, wanted the focus to be handmade tortillas. He tracked down rare heirloom varieties of corn, and made masa using the Indigenous technique of nixtamalization, in which dried kernels are cooked and soaked in an alkaline solution to soften them and make them easier to digest.

The couple also wanted to upend people’s expectations of a taqueria, a ubiquitous format in Austin. “I didn’t want to have to be bound by having a protein and cilantro and onion for it to be considered a taqueria,” Mr. Rico said. So they incorporated flavors from around the world: carnitas with a fish sauce-spiked salsa cruda; tuna tostadas sprinkled with furikake.

Nixta Taqueria opened in 2019 on Austin’s East 12th Street in a short building painted blue, like Frida Kahlo’s house in Mexico City, with pink accents. The front displays a vivid mural of the Aztec maize god Centeotl by the local artist Margaret Heidrick. The food has received national acclaim: Nixta was included on Food & Wine’s 2020 list of best new restaurants.

In the early days, Ms. Mardanbigi, who handles the restaurant’s operations, would often make Iranian food when she felt homesick. The couple discovered similarities between Iranian and Mexican cuisines; for example, the sauce for fesenjan, a thick, walnut and pomegranate-filled Iranian stew, somewhat resembled a mole. These conversations led to new dishes, like their “Persian mole” duck taco.

“Over time, we have realized that this crossover makes sense, and it is not anything that really anyone is doing in Austin,” Ms. Mardanbigi said.

With so much focus on the tacos, the couple paid little attention to the dessert menu, which was limited to a few flavors of paletas. But when the pandemic arrived last March, and Nixta’s business shifted to mostly takeout and delivery, Ms. Mardanbigi and Mr. Rico needed a sweet that would travel well.

Mr. Rico’s first instinct was to recreate his grandmother’s arroz con leche, adding butter and egg yolks — as he learned to do at Trois Mec to create an extra velvety consistency — as well as cream. The dessert was good, but it wasn’t special.

That’s when Ms. Mardanbigi suggested that he incorporate the flavors of sholeh zard. Immediately, Mr. Rico went to work fusing his beloved childhood dish with hers — consulting YouTube videos and Ms. Mardanbigi’s parents, who grew up in Tehran.

“There were some weeks where I was like, ‘This is super sholeh,’” Ms. Mardanbigi said, meaning too watery and too jiggly. In traditional versions, the rice is so soft it almost melts into the pudding. Mr. Rico decided to leave his grains a little al dente, adding texture and making the dessert less dense. He uses arborio rice instead of the usual basmati because he likes the slight chew.

He also swapped the traditional rosewater for a dusting of strawberry powder, to add similar floral notes and a touch of acidity. Mr. Rico said taking that first spoonful is “like you are unwrapping a present,” the bright pink strawberry powder and verdant pistachio topping providing an eye-popping contrast to the golden-yellow pudding underneath. Despite the tweaks, the couple didn’t give the dish a hybrid name — it’s listed on the menu simply as Persian Rice Pudding (Sholeh Zard).

The flavors are vibrant, luxurious and nostalgic, but the couple never expected the dish to become as popular as it has. To many customers, it’s as thrilling as the tacos. It “definitely helped us find our voice,” Mr. Rico said, and helped them embrace a celebration of the exciting possibilities of food that constantly evolves, and doesn’t stay in one lane.

Ms. Mardanbigi summed up the experience of eating at Nixta: “You approach it, you look at it, you have an expectation of it and you bite into it, and these things shouldn’t work together but they do, and you are not mad at it.”