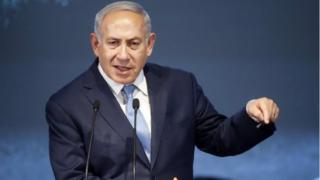 In more than 14 years as prime minister, Benjamin Netanyahu has become both Israel’s longest-serving leader and the first to face criminal prosecution while in office.

Lauded by his supporters as “King Bibi” and as a “magician” for his knack of winning elections, the leader of Israel’s right-wing Likud party is fighting for his political survival as he prepares to stand trial on corruption charges.

His success in polls has owed much to his image as the person who can best keep Israel safe from hostile forces in the Middle East.

He has taken a hard line towards the Palestinians, putting security concerns at the top of any discussion of peace, and long warned of danger from Iran.

Netanyahu was born in Tel Aviv in 1949. In 1963 his family moved to the US when his father Benzion, a prominent historian and Zionist activist, was offered an academic post.

At the age of 18, Benjamin returned to Israel, where he spent five distinguished years in the army, serving as a captain in an elite commando unit, the Sayeret Matkal. He took part in a raid on Beirut’s airport in 1968 and fought in the 1973 Middle East war.

After his military service, Mr Netanyahu went back to the US, where he earned bachelor’s and master’s degrees at the Massachusetts Institute of Technology (MIT).

In 1976, Mr Netanyahu’s brother, Jonathan, was killed leading a raid to rescue hostages from a hijacked airliner in Entebbe, Uganda. His death had a profound impact on the Netanyahu family, and his name became legendary in Israel.

Mr Netanyahu set up an anti-terrorism institute in his brother’s memory and in 1982 became Israel’s deputy chief of mission in Washington.

Overnight, Mr Netanyahu’s public life was launched. An articulate English speaker with a distinctive American accent, he became a familiar face on US television and an effective advocate for Israel.

Mr Netanyahu was appointed Israel’s permanent representative at the UN in New York in 1984.

Only in 1988, when he returned to Israel, did he become involved in domestic politics, winning a seat for the Likud party in the Knesset (parliament) and becoming deputy foreign minister.

He later became party chairman, and in 1996, Israel’s first directly elected prime minister after an early election following the assassination of Yitzhak Rabin.

Mr Netanyahu was also Israel’s youngest leader and the first to be born after the state was founded in 1948.

Despite having fiercely criticised the Oslo Accords between Israel and the Palestinians, Mr Netanyahu signed a deal handing over 80% of Hebron to Palestinian Authority control and agreed to further withdrawals from the occupied West Bank.

Mr Netanyahu stepped down and was succeeded as Likud leader by Ariel Sharon.

After Mr Sharon was elected prime minister in 2001, Mr Netanyahu returned to government, first as foreign minister and then as finance minister. In 2005, he resigned in protest at the Israeli withdrawal from the occupied Gaza Strip.

His chance came again in 2005, when Mr Sharon – just before a massive stroke that left him in a coma – split from Likud and set up a new centrist party, Kadima.

Mr Netanyahu won the Likud leadership again and was elected prime minister for the second time in March 2009.

He agreed an unprecedented 10-month freeze on settlement construction in the West Bank, enabling peace talks with Palestinians, but negotiations collapsed in late-2010.

Although in 2009 he publicly announced his conditional acceptance of a Palestinian state alongside Israel, he later toughened his position. “A Palestinian state will not be created, not like the one people are talking about. It won’t happen,” he told an Israeli radio station in 2019.

Despite his tough rhetoric and fulsome support for Israeli military action, Mr Netanyahu has not managed to put a stop to attacks from Palestinian militants under Hamas in the Gaza Strip.

In late 2012, he ordered a major offensive after an escalation of rocket fire into Israel, but stopped short of sending in ground troops.

However, after a relative lull, cross-border violence flared again and after a surge of rocket attacks in July 2014, Mr Netanyahu ordered another military campaign.

The 50-day war left more than 2,100 Palestinians dead, most of them civilians, according to UN and Palestinian officials. On the Israeli side, 67 soldiers and six civilians were killed.

Although during the conflict Israel had the support of the United States, its closest ally, relations between Mr Netanyahu and President Barack Obama were difficult.

They reached a low point when Mr Netanyahu addressed Congress in March 2015, warning against a “bad deal” arising out of US negotiations with Iran over its nuclear programme. The Obama administration condemned the visit as interfering and damaging.

The advent of Donald Trump’s presidency in 2017 led to a closer alignment between US and Israeli government policies, and within a year Mr Trump announced his recognition of Jerusalem as Israel’s capital.

The move sparked fury across the Arab world – which supports the Palestinians’ claim to the eastern half of Jerusalem occupied by Israel since the 1967 Middle East war – but it handed Mr Netanyahu a major political and diplomatic coup.

And in January, Mr Netanyahu was in Washington for the launch of Mr Trump’s “vision for peace” between Israel and the Palestinians.

The prime minister hailed it as the “opportunity of the century” and vowed to move swiftly to annex Jewish settlements in the West Bank and parts of the Jordan Valley that were allocated to Israel under Mr Trump’s proposals. The Palestinians rejected the plan, calling it “the slap of the century”.

Mr Netanyahu and Mr Trump also see eye-to-eye on Iran. The prime minister has repeatedly warned of the danger to the international community of leaving it with the capacity to develop nuclear weapons. In 2018, he welcomed Mr Trump’s withdrawal from the Iran nuclear deal and Washington’s strengthening of economic sanctions against it.

In the past few years, Mr Netanyahu has been dogged by a long corruption investigation, which culminated in him being charged with bribery, fraud and breach of trust in connection with three separate cases in November 2019. 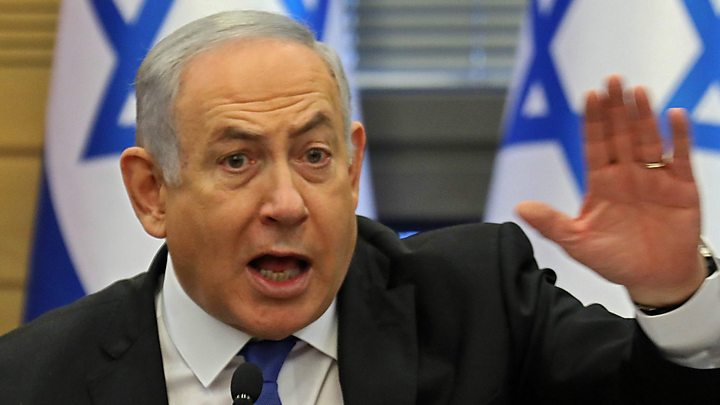 Mr Netanyahu is alleged to have accepted gifts from wealthy businessmen and dispensed favours to try to get more positive press coverage.

He denies wrongdoing and says he is the victim of a politically motivated “witch hunt” engineered by his opponents.

Even if he is convicted, Mr Netanyahu would not be required to step down as prime minister until the appeals process was exhausted – something that could take years.

Despite the corruption claims, Mr Netanyahu survived three inconclusive general elections in less than a year and won a record fifth term in office.

In each of the polls his main challenger was Benny Gantz, a former military chief who built an opposition movement on the basis of popular discontent with Mr Netanyahu.

Mr Gantz vowed never to sit with a prime minister under criminal indictment. But after failing to form a coalition with a majority in the Knesset after February’s election, and with Israel battling the Covid-19 pandemic, he agreed to form a “national emergency government” with Mr Netanyahu.

The agreement marked an end to one of the most turbulent periods in Israeli political history and was seen as a victory for Mr Netanyahu.