America’s special climate envoy John Kerry has issued one of his strongest rallying cries yet for the international community to do more to tackle climate change.

In a speech at Kew Gardens in London he said: “It is without exaggeration, about survival.

“The climate crisis, my friends, is the test of our times.

“This test is now as acute and as existential as any previous one.

“The irony should not be lost on us that it is young people around the world who are calling on adults to behave like adults, and exercise their basic responsibilities.

“They know the world is not responding fast enough to an existential threat that they didn’t create, but for which they risk bearing the ultimate burden – uninhabitable communities on an increasingly unliveable planet in their lifetimes.”

The former presidential candidate said that the world must understand the limits of the 2015 Paris climate agreement.

He argued that those commitments are no longer enough and he used the record-breaking heat in the US and flooding in western Europe as examples of what is to come. 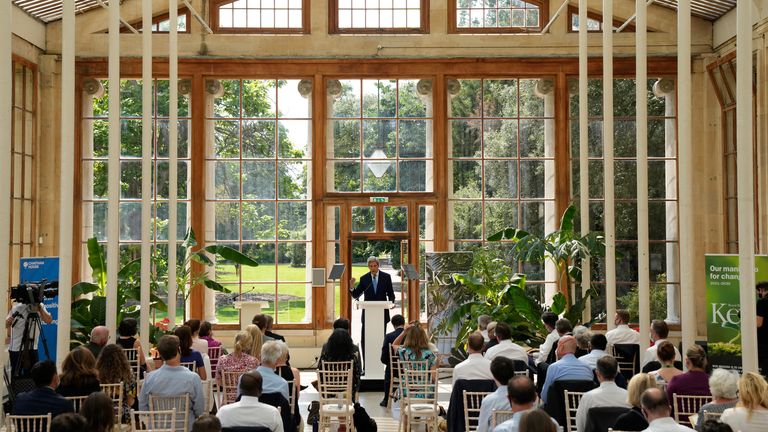 Scientists frequently use the caveat that it’s hard to directly link climate change to a single extreme weather event.

But NASA’s senior climate adviser Gavin Schmidt has told Sky News that particularly when it comes to extreme heat events, scientists are becoming increasingly confident about the connection.

He said: “When we’ve seen situations like in the Pacific Northwest, which blew through the records in such a dramatic fashion, you’re looking at ratios like 150 times, maybe a 1,000 times more likely to happen now than it would have done, at which point you can start to say ‘well it would never have happened before’.

“And so you can basically say that this event is almost 100% attributable to the fact that the climate has changed.

“It does feel like a radical thing to say and quite frankly, when I say it, I’m having to make sure that I’m saying things exactly correctly so that I’m not misinterpreted.

John Kerry said: “These impacts are real and most of them, my friends, are irreversible.

“But imagine an even more horrifying world in the near future unless we change course.

Mr Kerry took a clear swipe at countries that continue to invest extensively in new fossil fuel projects, and used particularly strong language in relation to China, singling the nation out for a mixture of criticism.

“Before she engulfs us in droughts or fires or floods, Mother Nature doesn’t differentiate between greenhouse gases from Europe or from the US or from China.

“Mother Nature only feels the impact and tracks emissions into the atmosphere writ large. And what matters to our collective fate is the total of all those gases, and the emissions track we are on together.

“That brings us inexorably to the world’s relationship with China.

“To those who say we should avoid engaging with China and climate change, differences, I say, there is simply no way, mathematical or ideological, to solve the climate crisis without the full cooperation and leadership of a country that today leads the world with 28% of global emissions.

“It is not a mystery that China and the US have many differences, but on climate, cooperation is the only way to break free from the world’s current mutual suicide pact.”

Subscribe to ClimateCast on Spotify, Apple Podcasts, or Spreaker

It was written for maximum impact ahead of a crucial international climate change meeting due to be held in Glasgow later this year.

Pressure is piling up on COP26 and its hosts the UK government to deliver, but the road to the summit is not running smooth.

Among other things, there are disagreements about climate finance and carbon markets.

Mr Kerry knows that these small-sounding details could derail what he views as a defining inflection point in the fight to reduce emissions.

He is attempting to create a new sense of momentum that will be strong enough to overcome the differences between nations before, in his view, the world runs out of time to limit the worst effects of global warming.