The TV presenter described the scene as Donald Trump departed from Washington on Air Force One for the final time ahead of the inauguration of incoming President Joe Biden. As Mr Trump’s plane taxied on the runway to the sound of Frank Sinatra’s “My Way,” Mr Boulton mocked the all ceremony as “pretty cringemaking.” Mr Boulton told Sky News viewers: “Just seeing Air Force One taxing to take off and this really is the departure of President Trump from Washington DC area. 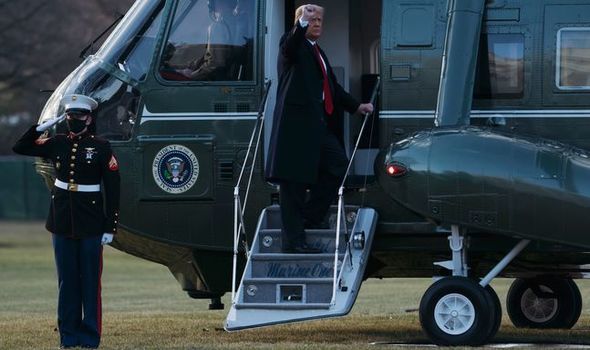 “We also have the musical accompaniment to the plane taking off

“We don’t actually know what Donal Trump is going to do during the inauguration we know he likes watching television but whether he will choose to watch the inauguration,” he continued.

“My Way the sound of Frank Sinatra playing out Donald Trump’s plane as he leaves Washington. It is all pretty cringemaking all of this.”