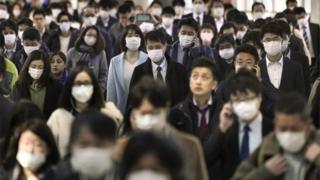 Japan is to declare a state of emergency in the capital Tokyo and six other regions in an attempt to tackle the rapid spread of coronavirus.

Prime Minister Shinzo Abe said the move could come as early as Tuesday.

He also announced a huge stimulus plan to help the economy weather the virus.

Japan has a relatively small number of infections compared to other countries, but there are concerns a sudden surge in cases in Tokyo could lead to a major outbreak in the world’s biggest city.

So far Japan has confirmed 85 deaths. In Tokyo there are now more than 1,000 confirmed cases, more than double the number a week ago.

The state of emergency would last about a month, Mr Abe said. It will cover Tokyo, Osaka and five other prefectures.

The governors of the prefectures will have the powers to close schools and businesses, but the authorities will not have the legal authority to order citizens to stay at home.

“In Japan, even if we declare a state of emergency, we will not close cities as seen in foreign countries. Experts have told us that there is no need for such a step,” said Mr Abe.

He said his government was preparing a $990bn package to help Japan’s economy cope with the effects of the virus.

Both the German and US governments have been highly critical of Japan’s failure to enforce social distancing measures, or to do widespread testing for Covid-19.

Some local medical experts are saying this order has come too late, and that the outbreak in Tokyo is already beyond the point where it can be easily controlled.

On Monday, children returned to school in parts of Japan for the first time in a month, reflecting big differences among officials on how to proceed.

Last week it was announced the Tokyo Olympic Games would start on 23 July, 2021 after being postponed for a year because of the coronavirus pandemic.