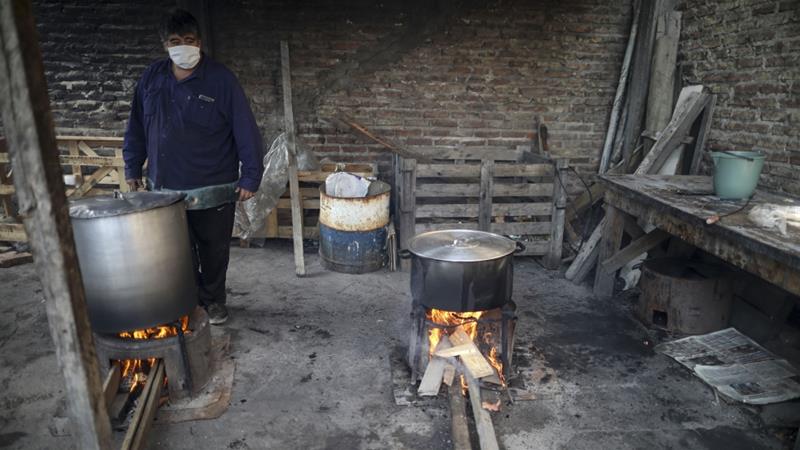 Buenos Aires, Argentina – Hilda Benavides cooks for 100 people now in Puente Alto, one of the poorest areas around the Chilean capital of Santiago, and among the hardest hit by the novel coronavirus.

One day last week, the 50-year-old grandmother spent the morning frying chicken, peeling potatoes, cutting carrots, and making jello for dessert. She spent the afternoon delivering the packaged meals to her neighbours. In the evening, she handed out donated diapers to young families who were out of work. That day, Benavides also found out her 21-year-old daughter, who lives with her, had tested positive for COVID-19.

“Many of the people who are infected, it’s because they went out to work,” said Benavides, whose small operation is voluntary. “They had to work in order to eat, because the financial support that the government is giving is not enough.”

Scenes like this are playing out in communities across Latin America, which finds itself in the jaws of the pandemic that has claimed more than 400,000 lives around the world.

Brazil has reported more than 850,000 cases and 42,000 deaths, second only to the United States. The virus is also spreading aggressively in Chile and Peru, with cases climbing in Mexico, Costa Rica, and Panama. 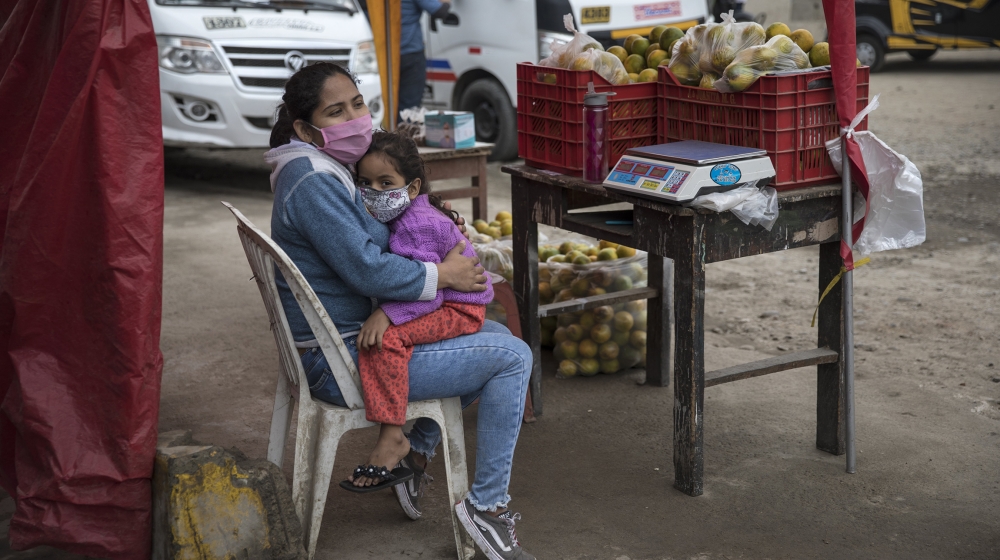 As countries struggle to contain new outbreaks, the looming threat of winter, and other respiratory illnesses like influenza and pneumonia, will complicate matters further. Economic desperation borne out of lockdowns that have dragged on for months is posing its own menace. Protests have broken out over hunger and job cuts.

“The COVID-19 pandemic has pushed our region to the limit,” Dr Carissa Etienne, director of the Pan American Health Organization, said last week.

The problem is compounded by insufficient testing, or government meddling in statistics, that has cast doubt over official figures. Last week, the Supreme Court of Brazil ordered the government of Jair Bolsonaro to reinstate statistics it had wiped from public view.

Right-wing President Bolsonaro’s response has been roundly denounced as reckless. He has mocked the severity of the virus he called a “little flu”, and sabotaged local lockdown efforts by discouraging people from complying. As the virus rips through impoverished favelas, communities are left to contain the crisis on their own.

“The structural problems of the region make it the worst place for the epicentre,” said Maria Victoria Murillo, director of the Institute of Latin American Studies at Columbia University, in New York City.

“Inequality is very high. Urbanisation is very high. That means you have a lot of informal housing, and people who live in crowded conditions with no access to water, which is perfect for contagion and makes it very hard to observe social distancing, or to wash your hands.” 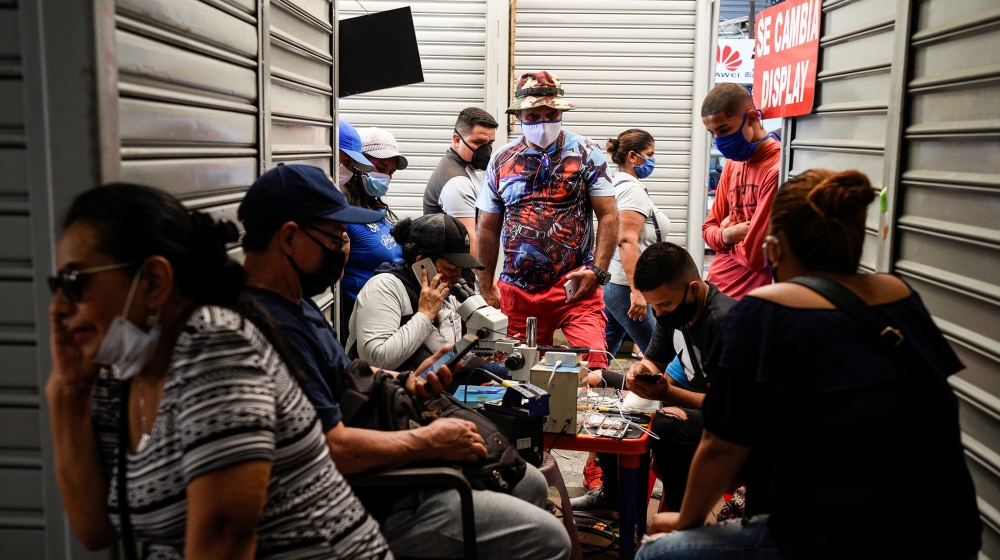 The structural issues extend to the fiscal situation. Many countries were already struggling economically before the pandemic hit. And with half of the region’s workforce in the informal sector, reaching them with financial assistance is its own problem. Those just above the poverty line slip under it.

Peru, with a population of 31 million, is still under a lockdown imposed in mid-March and has reported more than 200,000 cases and 6,000 deaths. The government was in a stronger economic position than many of its neighbours to provide financial help. But much of the population do not have bank accounts, or live in communities with no banks, so they had to travel distances and expose themselves to the virus to cash a state bonus. Without fridges in their homes, many people had to go into the community more frequently.

“It’s a chain of problems that intensify the possibility of contagion,” said Paula Munoz, a political science professor at the Universidad del Pacifico, in Lima. But given the structural issues, “I’m not sure if there could have been another way.”

Argentina, with 45 million inhabitants, also imposed a strict lockdown early on, and it now has one of the lowest rates in the region, with just more than 800 deaths. But Argentina was already in a brutal recession when the outbreak struck. The cost of a quarantine that has the economy running on fumes is fraying nerves.

“I can last one more month. Maybe two. But if we’re talking four months, it’s not possible,” says Andres Vega, who runs a stationery shop in Buenos Aires.

He has not met the criteria for government credits, so he returned the bulk of his merchandise, and shifted to houseware products hoping to boost sales. Now it is baking utensils, frying pans with a Che Guevara motif, and a copy of Salvador Dali’s surrealist melting clock that are on display in his storefront.

The economy also weighs on Cynthia Viteri, the mayor of Guayaquil, the largest city in Ecuador, which has learned painful lessons from its bout with the virus. In April, with the health system collapsed and morgues overflowing, horrifying images of cadavers on the street circled the world.

“It was like a war, where the dead would fall without hearing a single shot,” she told Al Jazeera. Viteri, who herself contracted the virus in the early days of the country’s outbreak, said the municipality stepped in to make up for a failure on the part of the central government, which is responsible for the public health system.

The city set up hospitals, mobile clinics, health centres along its border, and went door to door looking for possible coronavirus carriers. “Our strategy was to go out and find the sick people in their homes,” she said. Viteri says it has been 20 days of zero deaths over the normal amount.

“What failed here was a terrible health system that isn’t even good enough for normal times, let alone a pandemic. And corruption, to the highest degree. Here they would hold dead people hostage, they would ask for money to pick up the bodies, they would overcharge, this is a scandal as big as COVID,” said Viteri. She says some 10,000 people have died from COVID-19 in Guayaquil, a city of 2.7 million, not the 2,000 quoted by the government. 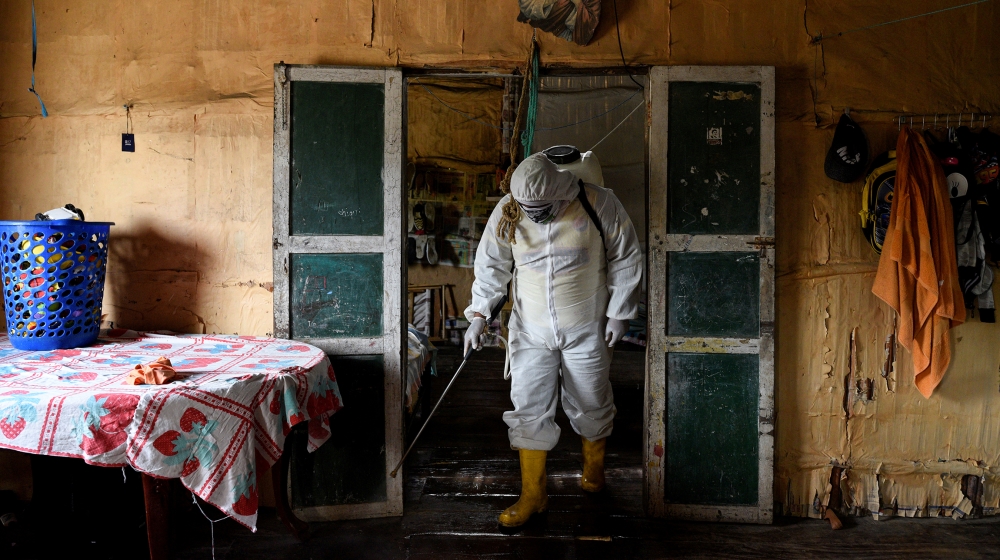 In the midst of this devastation, Murillo and Munoz believe the pandemic could lead to important changes. Governments that have collected information on the most vulnerable sectors of society have data to devise policies that can help them, says Murillo.

“This has also opened the conversation about what is the role of the state and to talk about fiscal reform,” she added.

“The recession is going to be very very hard this year and that is going to produce a lot of discontent,” said Murillo. “So if there isn’t an opportunity for political change, my sense is that people are going to start pouring back into the streets pretty soon.”