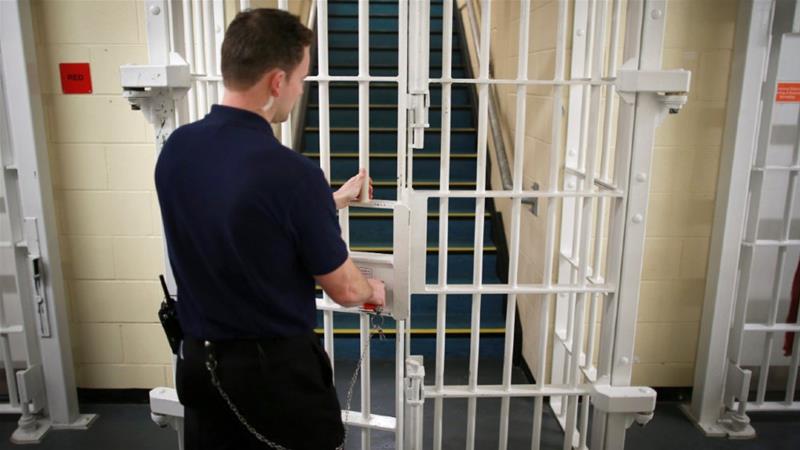 London, United Kingdom – Prisoners across England and Wales are being confined to their cells for almost 24 hours a day, with some doubled-up in cells built for one person, as institutions try to halt the spread of coronavirus. For those behind bars, the reality of life under lockdown is bringing “unprecedented” risks.

Social distancing is impossible in already overcrowded institutions, and hygiene measures are difficult to enforce, making prisons a “petri dish” for the virus, experts have warned. And prisons will increasingly be forced to cope with fewer staff, making it harder to safely enable time outside the cell.

In March, an 84-year-old sex offender with underlying health conditions was the first British inmate to die after contracting the virus. As of Sunday, two more prisoners had died, and 88 had tested positive across 29 prisons, prompting urgent calls to release inmates to try to slow the rate of infection.

“We have a higher percentage of people who could die from it than [in] the general population,” Andrea Albutt, head of the Prison Governors Association (PGA), told Al Jazeera.

Jails are required by the government to enforce social distancing measures and lockdown procedures; visits have been cancelled, and daily routines suspended.

Other than essential work, such as in kitchens or laundry, there are “no off-wing activities at all”, said Albutt: “Only a small number of prisoners can come out of their cells at any one time in order to do the necessities – clean the cell, have a shower, make phone calls, time in the open air.” Albutt believes this is happening daily, but warned it could change as staffing levels continue to deplete.

“We’re at a point where the government has to make a decision now; the virus is getting a grip in our prisons. If we don’t reduce the kind of prison population through early release schemes now, this week, we’ll have too many cases and it won’t make a difference,” said Albutt.

Pregnant women in custody who do not pose a high risk of harm to the public will be temporarily released from prisons in England and Wales within days, while up to 4,000 low-risk prisoners will be released on temporary licence, the Ministry of Justice announced this week. It follows moves in Northern Ireland to release up to 200 individuals coming to the final three months of their sentences. The Scottish government has proposed emergency legislation to give ministers the power to release inmates early if staffing numbers fall below “safe” levels.

The move has followed urgent calls from prison governors and campaign organisations including the Prison Reform Trust and Appeal to lower prison numbers and try to control the spread of the virus across a justice system that has the highest incarceration rates in Western Europe.

Al Jazeera understands that inmates inside HMP Thameside, a private prison managed by Serco, are being kept inside cells for more than 23.5 hours at a time, with only 20 minutes exercise outside. One prisoner at Thameside, who suffers from severe PTSD from his time inside, tweeted recently: “There is no greater test than when faced with solitude.” Serco, which manages six adult prisons in the UK, including HMP Thameside, told Al Jazeera they were following the Ministry of Justice guidance on social distancing.

But the reality of this is de facto solitary confinement.

“The sickness levels of prison officers are increasing at a pretty exponential level. There’s going to be fewer and fewer staff looking after more and more difficult prisoners,” said John Podmore, a former prison governor who is now professor of applied social sciences at the University of Durham and a freelance criminal justice consultant.

“A prolonged lockdown will exacerbate mental health problems. The word unprecedented doesn’t even come close to describing where we’re at,” he added. “If you imagine yourself in enforced solitary confinement in a large toilet, with an unscreened lavatory and someone you’ve never met before, the mental health implications are huge,” he said.

People in prison are more likely to suffer mental health issues than those in the community, yet prisoners are less able to manage their mental health conditions because most aspects of their day-to-day life are controlled. And during these unprecedented times, the little control they did have will be almost non-existent.

“Some prisoners will find it easier to cope than others, if they’re avoidant they might prefer to be on their own, initially,” said Naomi Murphy, a consultant clinical and forensic psychologist and clinical director of The Fens OPDP Service at HMP Whitemoor, a Category A high-security prison. “But a sizeable part of the population will seriously struggle with extended lock-up – it could lead to health anxiety and apathy, but also self-harm and suicide.”

Prisoners who are already vulnerable will be hit particularly hard. “Those suffering from paranoia will find it difficult to connect with the real world and they could find themselves in a spiral,” says Murphy. “Some people will struggle a lot with extended lock-up, and it will be difficult to get back on track potentially; for some, this could be really quite dire.”

Being locked up in cells for extended periods will also have an effect on immune health, and less access to daylight and free movement will make sleep more difficult, says Murphy. To mitigate this, staff at HMP Whitemoor have been introducing yoga and wellbeing packs to prisoners. And while the kind of face-to-face mental health support previously offered will no longer be possible, staff are making use of talking to prisoners during exercise hours, at a safe distance, and are offering “open letterbox” contact through cell doors.

Other measures are being put in place to help prisoners stay connected with friends and family. Free daily 10-minute phone calls are being offered at HMP Doncaster, for example.

One prisoner at HMP Nottingham wrote a letter of thanks to staff who they said had gone above and beyond the call of duty. “I want to thank all A Wing staff for getting up each morning and despite your own fears and worries to come into work to help us prisoners to have time out of our cells and keep us updated and for treating us like equals,” they wrote. “I have seen prison officers in a new light.”

The Ministry of Justice said its “utmost priority” was to protect life during the outbreak. “We have flexible plans in place to keep all staff and prisoners as safe as possible, and are issuing secure phone handsets to help offenders keep in touch with their loved ones.”

Justice Secretary Robert Buckland said: “This is an unprecedented situation because if coronavirus takes hold in our prisons, the NHS could be overwhelmed and more lives put at risk.

“All prisoners will face a tough risk assessment and must comply with strict conditions, including an electronic tag, while they are closely monitored. Those that do not will be recalled to prison.”