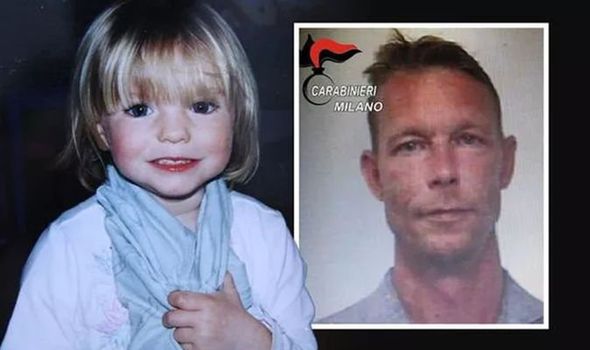 Convicted rapist and child sexual abuser Christian B is believed by German prosecutors to be Maddie’s killer. However, they have not charged him with any offence in relation to Madeleine’s disappearance.

It claimed that he went by the username “madness-der-holger” and suggested he wanted to “capture something small and use it for days, that’s it.”

His chat partner, “Wahnsinn-der-holger”, is said to have responded: “Oh, if the evidence is destroyed afterwards”.

RTL said that officers had become aware of the online chats after Christian B’s girlfriend reported him in 2015 for an attack and police searched his home.

RTL claimed that Christian B told his chat partner that he would make a lot of films if he were to capture a “little one”.

It added that during a search of a different property belonging to the suspect – who is now incarcerated – they found other memory sticks.

Police reportedly evaluated over eight thousand files, most of which were said to be videos or pictures of abused children.

RTL alleged that around one hundred of the files could be assigned to Christian B.

Madeleine went missing when she was three years old, while her family were on holiday in Portugal in 2007.

Christian B was identified as the prime suspect in Madeleine’s disappearance by German investigators in June 2020.

He was previously jailed after raping a 72-year-old American woman in the Algarve in 2005.

However, in 2020 German prosecutors said they believe the girl was dead.

Christian B was believed by prosecutors to be living in the Algarve between 1995 and 2007.

The day after Madeleine disappeared, the suspect transferred his Jaguar car to someone else’s name.

Police also uncovered phone records that appeared to place him in the Praia da Luz area – where the family were on holiday – the evening of Madeleine’s disappearance.

She and her siblings had been left asleep in the couple’s ground-floor apartment on May 3 that year.

Her parents checked in on the children throughout the evening, until Kate discovered Madeleine was missing at around 10pm.

Christian B has always denied all allegations in relation to the disappearance of Madeleine McCann.

German prosecutors were contacted to confirm the messages.