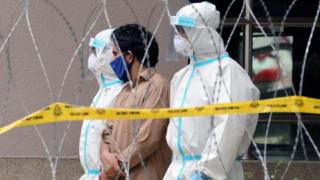 Malaysian police say an operation to arrest hundreds of undocumented migrants in Kuala Lumpur on Friday aimed to reduce the spread of Covid-19.

They were detained to ensure that they did not move around and spread the disease, police chief Abdul Hamid Bador told the state news agency.

The raids took place in a part of the capital known to house foreigners.

The United Nations has urged the Malaysian authorities to release children and vulnerable individuals from the detention camps where migrants are held.

Phil Robertson of Human Rights Watch tweeted that the detentions risked worsening the pandemic in Malaysia, both in terms of potential outbreaks inside the camps but also by making undocumented people less likely to co-operate:

Images shared by Human Rights Watch and other organisations but not verified by the BBC, apparently from the raids, show hundreds of people sitting on the ground in close proximity, surrounded by armed police.

Malaysia has seen just over 100 deaths from coronavirus, according to figures tracked by Johns Hopkins University.

The country remains under a partial lockdown.

Malaysia does not recognise refugees and there are high levels of distrust for those who come from abroad, often working as low-paid labourers.