Germany’s chancellor appeals for unity and solidarity within the EU to tackle the coronavirus pandemic. 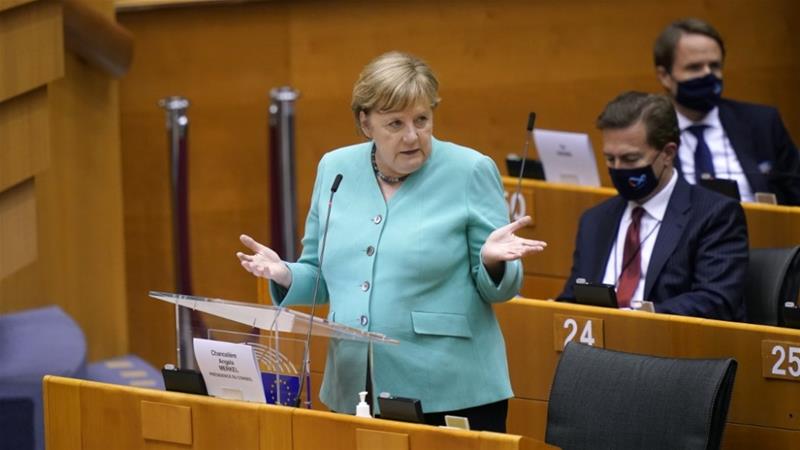 German Chancellor Angela Merkel appeals for unity and solidarity within the European Union to tackle the coronavirus pandemic as she presents her country’s European Council presidency plans.

Speaking to the European Parliament in Brussels on Wednesday, Merkel called for support for the disputed EU-wide economic recovery package.

“I believe in Europe. I am convinced by Europe,” she said. “No one can make it through this crisis alone. We are all vulnerable.”

Merkel also spoke about the United Kingdom’s exit from the EU.

Germany will continue to push to seal a new partnership agreement with the UK by the end of the year, but the EU should prepare for an abrupt split of ties from 2021, she said.

“Progress in negotiations thus far has been slim, to put it diplomatically,” Merkel told the European Parliament.

“We have agreed with the UK to accelerate the pace of the talks … I will continue to push for a good solution, but we should also prepare for a possibility of a no-deal scenario.”

The UK has so far rejected EU pressure to commit to close ties in areas ranging from fisheries to harmonising competition standards – a “level playing field” – since British Prime Minister Boris Johnson – a key campaigner for Brexit – wants only a narrower trade deal.

British and EU officials meet in London this week for more talks. The bloc’s chief negotiator, Michel Barnier, has said the 27 members of the Union would not seek a deal at any price.

Barnier had dinner with Johnson in London on Tuesday evening. On Wednesday, he said: “We are working hard for a fair agreement with the United Kingdom, including on fisheries and a ‘level playing field’.”

The two elements are among the points that have blocked an agreement thus far in talks between the world’s largest trading bloc and its fifth-biggest economy. Should no deal emerge, significant trade and travel disruptions would ensue.

Johnson said in a call with Merkel on Tuesday evening that the UK would leave the transition period at the end of the year “on Australia terms” if no better deal was agreed.

Australia does not have a comprehensive trade agreement with the EU. Much of EU-Australia trade follows default World Trade Organisation rules, though specific agreements are in place for certain goods.