The Met Office has issued yellow snow and ice warnings for parts of northern Scotland today (December 23) and on Christmas Eve. Additionally yellow wind warnings have been issued for the entirety of England and Wales this weekend, with the Met Office warning of winds as strong as 80mph. The new warnings are in addition to a yellow rain warning already in place for much of England and Wales today.

Met Office yellow snow and ice warnings are in place in Scotland from 9pm today until 11am on Thursday (Christmas Eve).

The warning reads: “Showers across northern Scotland will turn more persistent from late evening, with snow occasionally falling to low levels through the night.

“This will result in widespread icy patches on untreated surfaces, and up to 1 cm of snow below 100m away from the coasts, with 2 to 3 cm between 200 and 300m.

“Showers will turn less frequent after dawn on Christmas Eve.” 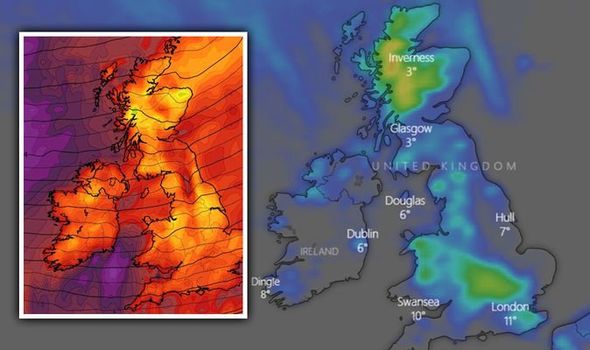 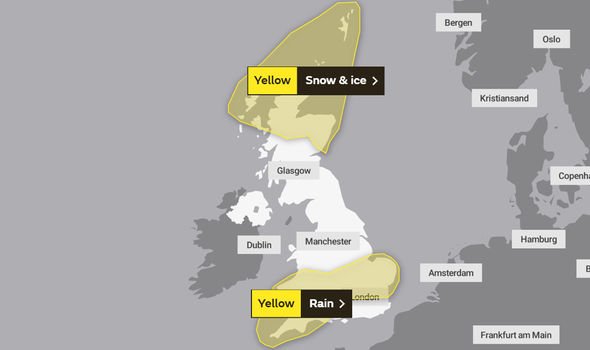 Additionally a yellow rain warning is in place from 6am today until 2am on Thursday in much of England and Wales.

The warning reads: “Spells of heavy rain are expected during Wednesday, with the heaviest rain likely to develop during Wednesday afternoon and continue well into the evening, before clearing away southeastwards during the early hours of Thursday.

“The highest rainfall totals look likely to be over parts of East Anglia, the Midlands, southeastern Wales and, perhaps, parts of the West Country. 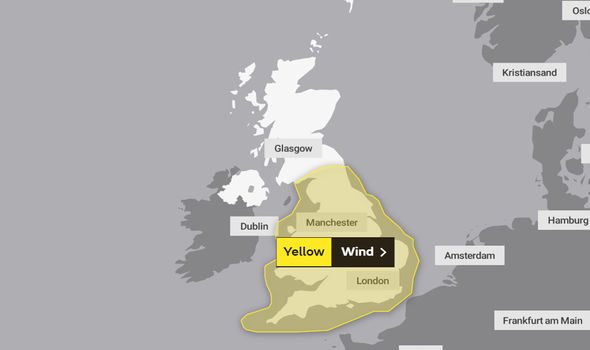 “The rain will be accompanied by strong north to northeasterly winds, with gusts of 60 mph on north facing coasts in the far west.”

Over the weekend, strong winds are expected to blast much of the UK.

England and Wales is under a yellow wind warning from 3pm on Saturday, December 26 (Boxing Day) until 12pm on Sunday, December 27.

The Met Office warns winds could reach as high as 80mph in some areas.

The Met Office warning reads: “An area of strong southwesterly winds will develop across parts of northern England and the far south of Scotland on Saturday afternoon, before transferring southeastwards across the rest of England and Wales into Sunday morning, clearing by early Sunday afternoon.

“Hills and coasts exposed to the southwesterly winds could see gusts of 70-80 mph.

“In addition to the strong winds, a period of heavy, squally rain will affect western and southern areas.

“Combined with strong winds, the rain will lead to some hazardous travelling conditions.”

This is a breaking story, refresh your browser for updates.