BBC Weather: Flood warning issued for parts of the UK

The Met Office has named Storm Christoph, the third storm of the 2020/21 storm season. This will bring torrential rain, strong winds and the threat of flooding to parts of the UK. There are amber weather warnings for rain in place for three days as the storm hits.

A deepening low is to blame for the stormy conditions, with rain developing during Monday persists into Wednesday and Thursday.

The Met Office has updated weather warnings across Monday, Tuesday and Wednesday to reflect the newly named storm.

The forecasters tweeted: “Storm Christoph has been named, with heavy rain and flooding likely on Tuesday, Wednesday and Thursday.”

This is the third storm of the 2020/21 storm season so far, with Alex and Bella preceding Christoph earlier in the season. 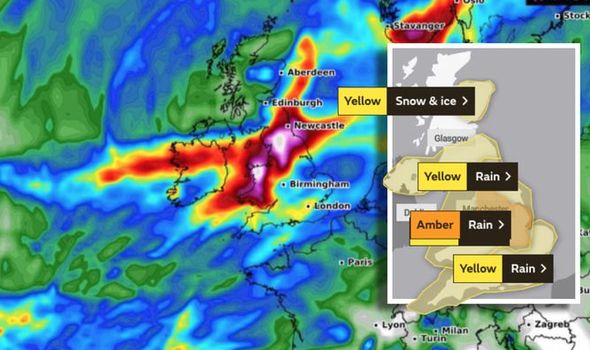 The Met Office says this heavy rain – up to 7.8 inches – is associated with Storm Christoph.

Rain will be heaviest and most persistent across western facing hills, and more than 100 mm of rain is expected across the higher ground with the potential for 150 to 200 mm of rain in the most exposed areas.

The rain will also lead to rapid melting of any remaining lying snow across the higher peaks adding to water entering the river network.

Strong winds will accompany the rain at times and may add to travelling difficulties across higher and more exposed routes.