BBC Weather: UK to be hit by snow as temperatures drop

Freezing temperatures, ice and snow are on the cards for Britain this weekend after a week of torrential rain and fierce winds due to Storm Christoph. Now the Met Office has issued a fresh warning for snow and ice across parts of the UK over the next few days. Up to six inches could fall in some areas as a band of rain turns to snow in the plunging temperatures.

Now Storm Christoph has tracked away from the UK, colder winter weather is on the way according to forecasters.

Met Office Chief Meteorologist, Paul Gundersen, said: “Colder air is now established across the UK as Storm Christoph moves away into the North Sea, and gale-force winds will impact the northeast of the country.”

The cold weather will remain throughout the weekend and into next week with some sunny spells and wintry showers, mainly in the north and north west.

Now snow and ice warnings are in place on Sunday, with up to six inches of snow forecast in the warning area. 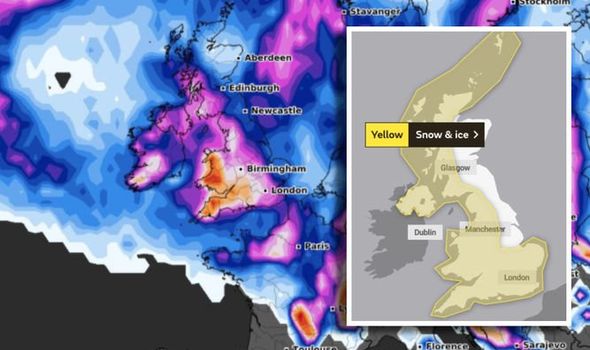 The forecasters warn: “An area of rain will cross the west and southwest of the country on Sunday morning and turn readily to snow as it spreads eastwards, and also lead to some icy surfaces.

“Mainly 1 to 3 cm of snow accumulation for most parts, but possibly 5 to 10 cm over 100 m with a small possibility of 10 to 15 cm over high ground for example on Dartmoor, the Brecon Beacons and Snowdonia.

“These snow amounts will cause some disruption to transport, especially on routes that cross even modest high ground.”

Maps from Netweather and WXCharts show heavy snow over the south of England, Wales and the North West this weekend.

The forecasters say of this weekend: “There will be a lot of fair, bright weather around and this wind will ease.

“However, that means the weekend nights will be much colder with a widespread frost.

“A deep chill over the UK and some of the standing water will start to freeze.”

On Sunday, the low pressure will “skirt” around the southwest and this is what could bring rain and snow.

Temperatures over the weekend are forecast to take a dive, with the potential to reach -8C.

Snow risk charts from Netweather show an 80 percent chance of snow across the South of England, Wales, Scotland and the North of England on Sunday.