Snow is continuing to batter Britain this week after flurries were seen up and down the country over the weekend, including a light sprinkle in parts of London. Now even more snow is on the way after the Met Office issued a fresh batch of weather warnings for snow and ice on Monday morning, extending for the next two days. A yellow alert for ice is in place for a swathe of the midlands and Wales from 6pm tonight as ice stretches could lead to chaos.

The Met Office said: “Icy stretches are expected, especially where there has been some melting snow during Monday daytime or snow is still lying.”

The forecaster warned people to be wary of ice on the rods and pavements, saying there will probably be “some icy patches on some untreated roads, pavements and cycle paths” along with the potential for injuries.

In Scotland and parts of northern England, a snow warning is in place from 11am on Tuesday until 11.59pm.

The region has already seen plenty of snow in recent days, which followed on from a week of torrential rain and wind thanks to Storm Christoph, which sparked flood warnings across the northern part of the UK. 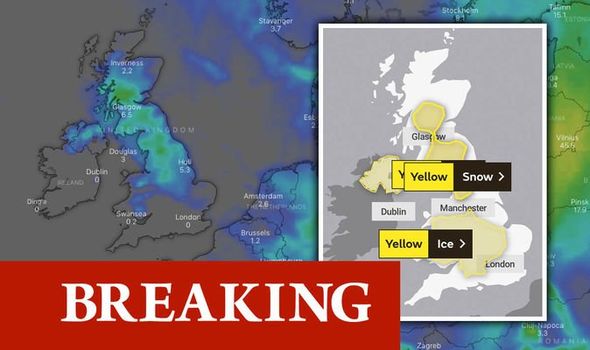 The alert says: “A spell of hill snow will develop during Tuesday late morning and afternoon. Over northern England and southern Scotland, snow will initially fall down to approximately 200-300 m before gradually becoming confined to areas above 400 m during course of the afternoon.

“Further north, hill snow will be more prolonged and 2-5 snow cm is likely above 200 m and in some places 5-10 cm is possible above 400 m, most likely over the southern Grampian Mountains.”

Strathclyde, south west Scotland, the Highlands and central parts of Scotland have so far seen the worst of the wintry conditions.

But the alert also extends into northern England, including Cumbria, Lancashire, Durham and Northumberland.

North Yorkshire is also expected to see snow under the latest warning.

The Met Office has warned that snow from the weekend will remain on the ground through Monday, causing the potential for some icy stretches to form.

But weather maps show that by Wednesday, temperatures will start to climb again, marking an end to the recent cold spell.

Met Office meteorologist Simon Partridge said: “It’s a bit of a rollercoaster from cold and wintry conditions to wet and windy ones.

“We are keeping an eye on rainfall totals because there are some areas that are very sensitive to rainfall and there is further possible flooding as we go through the second half of the week.”