Today (Friday, October 2) two yellow rain and wind warnings are in place across southern England and parts of Wales. The warnings expire at 8pm this evening, but a swathe of new warnings have now been issued by the Met Office for over the weekend. Here are the latest weather warnings, maps and charts.

On Saturday much of the UK is under a yellow or amber warning for severe rain.

Between 6pm on Saturday and 6am on Sunday, an amber warning has been issued for parts of eastern Scotland, affecting Angus, Dundee, Perth and Kinross, Aberdeen and Aberdeenshire.

The Met Office warn up to 4.7 inches (120mm of rainfal) will be possible over higher ground in areas under warning.

The warning states: “An area of rain is expected to move into Scotland from the east on Saturday morning and persist though to Sunday before clearing westwards. 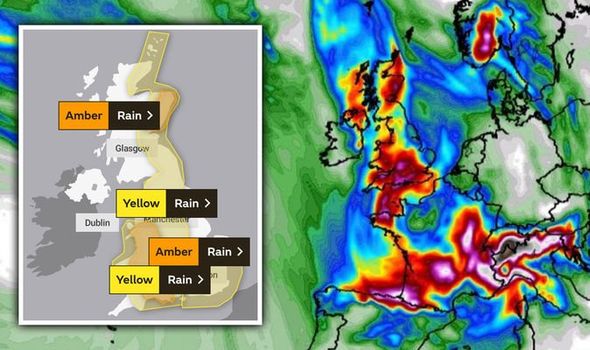 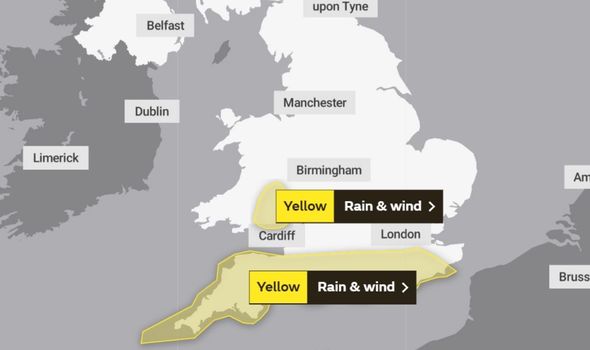 “This is likely to bring widely 40-70 mm of rain to this area with over 120 mm possible over the high ground.”

Another amber warning for rain has been issued from 12pm on Saturday until 6am on Sunday, affecting parts of north-west and south-west England, Wales and the West Midlands.

The Met Office warn: “A band of rain will become slow moving and heavy across Wales, the West Midlands and into southwest England.

“This is likely to bring flooding and some disruption to travel. Many places will see 25-50 mm of rainfall, with totals of 70-90 mm expected over higher ground of Wales and southwest England as well as the potential for over 120 mm in some of the most exposed high ground of Snowdonia and Exmoor. 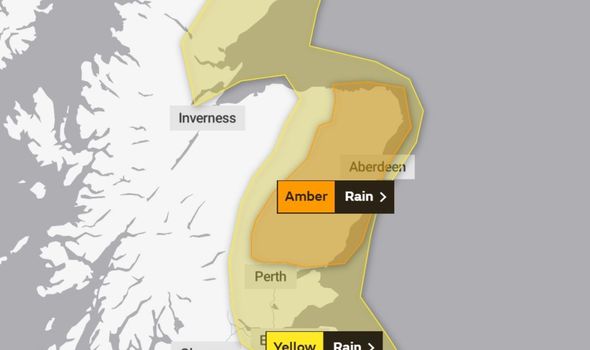 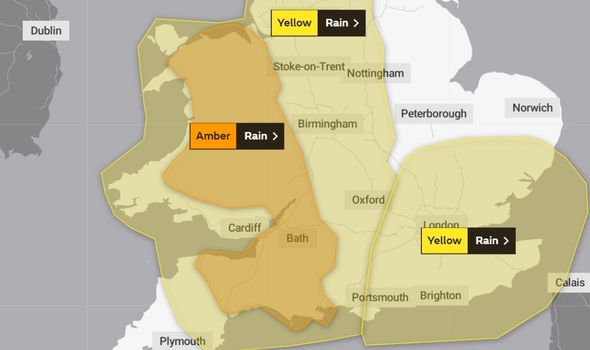 “The unusual wind direction associated with the rainfall will mean that the peak rainfall totals are likely to occur in some areas that are usually well sheltered and drier during unsettled spells of weather.”

A large portion of the UK, including areas in Scotland, England and Wales is under a yellow rain warning from 3am on Saturday until 12pm on Sunday.

Parts of the east and south-east of England, including London, have also been issued a yellow rain warning from midnight tonight until 10am on Saturday.

Storm Alex is expected to cause widespread travel disruption and potentially flooding on Friday.

However the wet and windy weather is expected to continue over this weekend, as the Met Office forecast another “low-pressure system” approaching the UK from the east.

Steve Ramsdale, Chief Meteorologist at the Met Office, said: “It’ll be quite a miserable end to the working week for southern and south-west England as Storm Alex brings heavy rain and strong winds tomorrow, with coastal gales of around 60-65mph for some.

“Away from the south it’ll be a more pleasant day, with light winds and bright spells for much of northern England, Scotland and Northern Ireland.

“However, as the strong winds and rain associated with Storm Alex clear away from Britain later on Friday, another low-pressure system moves towards the UK from the east bringing further very heavy rain and strong winds to many over the weekend.”

This is a breaking story with updates to follow.