The Met Office has issued a weather warning which has been in place since 3am last night, extending to 12pm today and has affected the south-west of Scotland, mainly affecting Dumfries and Galloway, East Ayrshire and South Ayrshire. A second warning has been issued for the south coast of England on Friday, October 2. The warning will remain in place from 3am to 8pm, with the Met Office warning of “wet and windy weather” 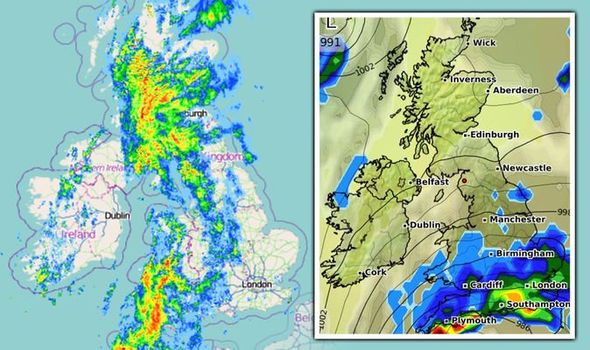 The Met Office says residents should expect spray and flooding on roads, which will undoubtedly extend journey times.

Buses, trains and other modes of public transport are also expected to be affected, with travel times taking longer than usual.

Flooding of a few homes and businesses is also a possibility.

The Met Office said: “Rain and showers overnight Thursday into Friday will turn heavier and more persistent during Friday morning, along with a strengthening east to north easterly wind.

“Some places could receive 40 to 50mm over the course of 12 to 18 hours, most likely in the south of this region, combined with gusts of 45 to 55 mph inland during Friday morning rush hour.

“Some coastal regions exposed to the south-east could experience gusts of 60 to 65mph.

“The combination of wind and rain, combined with trees losing they leaves, increases the risk of flooding due to blocked drains and watercourses.

“The wind and rain will ease from the south later on Friday, as the weather system responsible starts to move away.”