MEXICO CITY (Reuters) – Mexico’s deputy health minister unveiled public social distancing measures to fight the coronavirus on Tuesday, even as some top government officials seemed to shrug off his appeal for people to keep a distance of 1.5 meters (5 feet) apart. 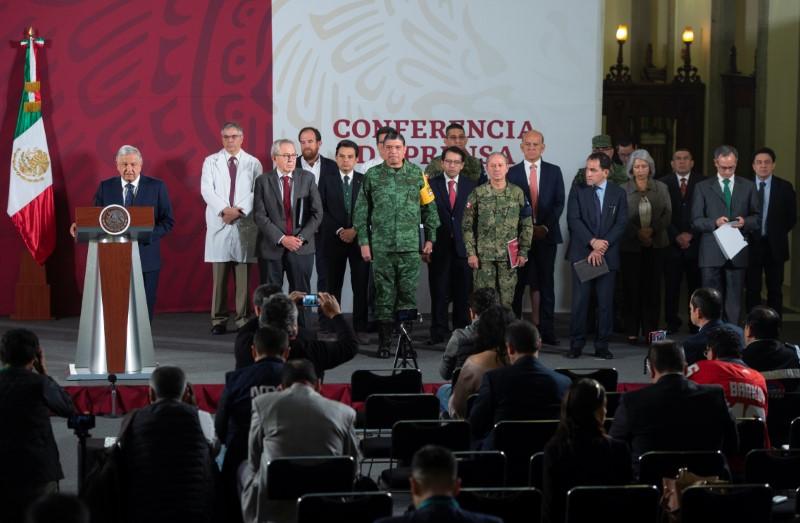 The defense minister and finance minister were among about a dozen senior officials who gathered for a news conference where the measures were announced. They stood on a cramped stage, with little space evident between them, as a slide showed a cartoon figure with outstretched arms to indicate safe distances.

President Andres Manuel Lopez Obrador has been criticized for an allegedly cavalier approach to the virus, encouraging people to go out to restaurants, for example, despite more stringent measures recommended by his government.

Mexico so far has just 367 cases and four deaths but is bracing for a fast rise in infections in coming weeks.

At Tuesday’s event, Deputy Health Minister Hugo Lopez-Gatell said Mexico had seen an increase in non-imported coronavirus cases and was stepping up mitigation measures, starting with suspension of large events.

“We have decided to temporarily suspend events with 100 people or more,” Lopez-Gatell said at the president’s regular news conference. “All gatherings – public, private, governmental, social – must be avoided throughout the month.”

The government also announced some work restrictions, low or zero interest loans for small businesses, protections for the elderly and vulnerable, and said some military medical facilities would be opened to the public.

Lopez-Gatell defended Mexico’s handling of the epidemic, saying it was adopting measures at an earlier stage than countries that have been hit hard by the virus, such as Spain, Italy and the United States.

“Mexico is entering the epidemic a month later,” he said adding it is best practice to “not take the measures too early but reserve them for the exact moment of the inflection point, which is the change in the curve in the number of daily cases.”

Lopez Obrador is due to sign a decree that companies must permit vulnerable populations such as senior citizens, pregnant women and people with chronic diseases to stay home from work, with pay.

Lopez Obrador suggested titans of Mexican industry are also stepping up, noting that billionaire Carlos Slim told him that he will not lay off any workers during the coronavirus crisis.

Slim’s holding company Grupo Carso said later Tuesday its employees would keep their jobs even if some of the group’s businesses temporarily closed.

Additionally, the Carlos Slim Foundation said it would donate 1 billion pesos ($40.36 million) to various public efforts to combat the coronavirus, including helping to provide medical equipment such as ventilators.

Lopez Obrador said the government has enough resources to maintain social programs, weather falling oil prices and proceed with signature projects such as the Mayan train and a refinery near the southern port of Dos Bocas.