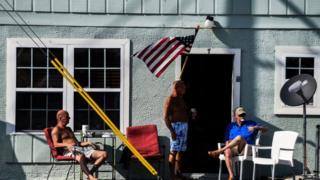 More US states are beginning to lift lockdown orders even as US leaders say social distancing guidelines will be necessary throughout the summer.

But governors warn that life will not quickly return to normal, and that restrictions will remain in some places to keep the virus from resurging.

On Friday, the US saw its largest single-day spike in cases.

But the infection rate has dropped significantly in several hotspots, including New York, the US epicentre.

As of Sunday, the US has over 940,000 recorded coronavirus cases, according to Johns Hopkins University, and more than 54,000 deaths.

Public health experts warn that lifting restrictions too soon could cause a second wave of infections. The decision to end mandatory orders comes as over 26m Americans seek unemployment protection, and the jobless rate climbs to around 16% of the population.

Even as state governors allow orders to expire, some city mayors have issued their own separate plans to end local lockdowns rules.

How are states reopening?

At one point, over 90% of the US population was under mandatory lockdown orders, but some states began lifting orders over the weekend allowing some Americans to return to hair salons and tattoo parlours.

Georgia, Oklahoma, Alaska and South Carolina have already allowed some businesses to reopen. They and other states have issued plans that call for more rules to be relaxed in the coming week.

Montana’s governor has allowed churches to reopen starting on Sunday, with social distancing measures still required. Restaurants and schools will be allowed to reopen on 7 May.

What have officials said?

On Sunday, White House coronavirus taskforce co-ordinator Dr Deborah Birx said social distancing will remain the norm “through the summer to really ensure that we protect one another as we move through these phases”.

Her comments come after Vice-President Mike Pence said the virus would be largely “behind us” by the 25 May Memorial Day holiday, which signals the unofficial start of summertime in the US.

Dr Birx told Fox News this weekend that new cases and deaths “will be dramatically decreased by the end of May”.

On Sunday, New York Governor Andrew Cuomo said it would be impractical to force people to remain in their homes all throughout the summer with nothing to do.

The death rate has dropped in the New York, with 367 deaths on Saturday compared with 437 on Friday. It represents the lowest increase since 30 March.

Governor Cuomo said that transmission rates, as well as death rates, would dictate how and when the state reopens.

He added that some business sectors may be able to consider reopening after his lockdown order expires on 15 May – but only if the region has seen a two-week decline in infections as outlined by recommendations from the US Centers for Disease Control and Prevention.