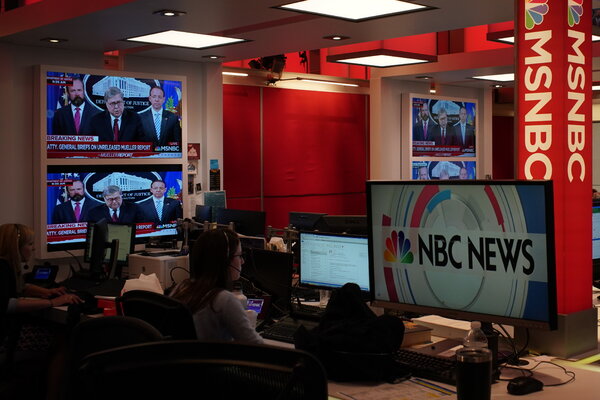 Employees at MSNBC, the 24-hour cable news channel with a slate of prominent liberal anchors, said on Thursday that they planned to form a union representing about 315 workers including producers, bookers, writers, and fact checkers.

The announcement is the latest example of a workers’ rights movement that has swept major media organizations, as print, digital and broadcast journalists seek to unionize amid a precarious outlook for their industry. Recently, employees at The Atlantic, The Daily News of New York and Insider, as well as tech workers at The New York Times have announced their intent to unionize.

The MSNBC bargaining unit would be represented by the Writers Guild of America, East, which said that a clear majority of the network’s employees had signed a letter seeking voluntary recognition of a union. The Writers Guild represents many news and entertainment outlets, including ABC News and CBS News, whose involvement dates to the guild’s beginnings in 1954.

“We as journalists believe that democracy works, as a nation, state, country, city, or in a workplace; things work better when policies are made with input from the people,” said Andrew Joyce, a segment producer at “The Rachel Maddow Show” who helped lead the organizing effort.

The prospective union would also include workers at “The Choice,” a digital news and commentary service available on NBC’s streaming network, Peacock.

Digital journalists at NBC News, a corporate sibling of MSNBC, unionized in 2019 with the NewsGuild of New York. They have not yet settled on a contract with NBC.

In a message on Thursday, the MSNBC bargaining unit wrote, “We are standing up for each other and our work — because this is who we are.” It was a play on a marketing campaign by NBC News and MSNBC featuring anchors and correspondents explaining their commitment to the news with the slogan, “This is who we are.”

Rashida Jones, the president of MSNBC, said in a statement: “We’re looking forward to continuing the type of direct, open and honest communication that has already resulted in meaningful change at the network.”

Ms. Jones, who began her job earlier this year, is the first Black woman to run one of the three major cable news networks. Stephanie Brumsey, a segment producer of the weekend show “The Cross Connection,” said she was “very hopeful” that the new leadership would voluntarily recognize the union. “It’s not the old guard that’s there,” she said.