At at least 16 bodies were removed from Brookdale Hospital Centre in Brooklyn as medical facilities across New York City are stretched to the limit by the pandemic. US coronavirus deaths have now exceeded those reported in China, with New York City alone accounting for 914 deaths and more than 38,000 confirmed cases.

At Brookdale, two bodies were carried side by side on the forklift at times and loaded into the waiting mortuary van.

Stunned hospital staff removed the corpses as quickly as possible to free up much-needed hospital space inside.

Passersby appeared shocked by the grim scenes unfolding before them. 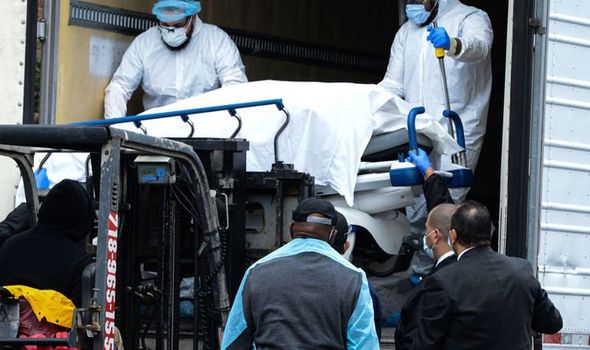 Lydia Ramirez, 32, told the New York Post: “No one should see a body being loaded with a forklift on a public street.

“It’s really sad and disturbing to see. At least put up a tarp or a tent, if for no other reason than for the dignity of the deceased’s family.” 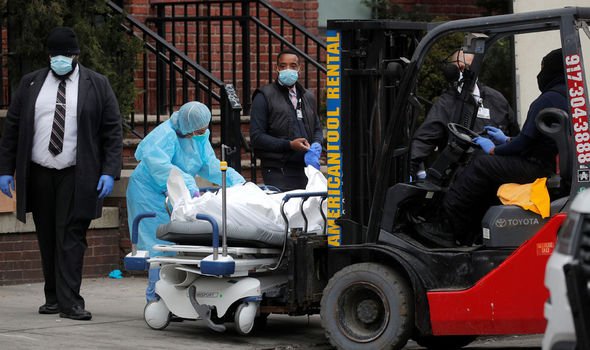 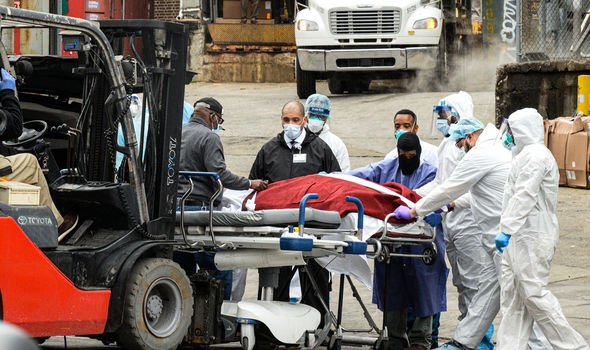 He said: “This is the point at which we must be prepared for next week when we expect a huge increase in the number of cases.

“What I asked very clearly, last week, was for military medical personnel to be deployed here.”

Mr De Blasio, a Democrat who last year sought his party’s presidential nomination, said he had asked the White House for an additional 1,000 nurses, 300 respiratory therapists and 150 doctors by Sunday.

The total confirmed US cases rose to 187,000 and White House medical experts say 100,000 to 240,000 people could ultimately die, despite unprecedented lockdown orders by state and local governments largely confining Americans to their homes.

In addition to the rules issued by at least 30 states, President Donald Trump, reversing course, said this week that most businesses and schools should remain shut at least through the end of April. 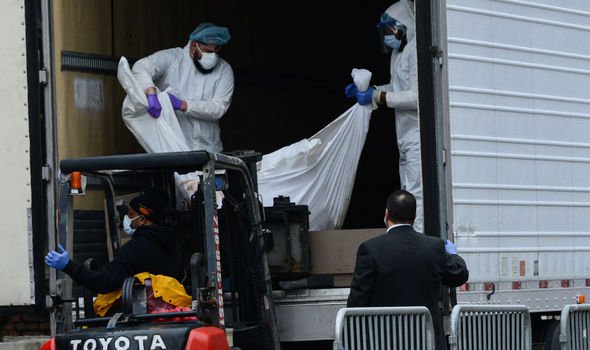 Mr Trump said the next two weeks would be “very, very painful” for the country.

He said: “We want Americans to be prepared for the hard days that lie ahead.

“We’re going to through a very tough two weeks and then, hopefully, as the experts are predicting you’re going to be seeing some real light at the end of the tunnel.”