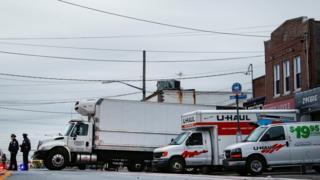 Dozens of bodies have been found stored in moving lorries in New York, authorities say, after passersby complained of the smell.

The Andrew T Cleckley Funeral Home in Brooklyn had rented trucks and put about 50 corpses inside with ice.

One official quoted anonymously in the New York Times said the home’s freezer had stopped working.

Police were called to the scene and sealed off the area. A refrigerated truck later arrived.

It is unclear if these were victims of the coronavirus. But officials and funeral homes have struggled to cope with the huge numbers of dead in New York, the worst-affected state in the US.

More than 18,000 people have died in New York City alone, according to Johns Hopkins University data. As a whole, the US has more than one million confirmed cases of coronavirus, more than any other country.

“They had dead bodies in the vans and trucks,” the owner of the building next door told the New York Times. “They were on top of each other in body bags… all of [the vehicles] were packed.”

Eric Adams, the Borough President of Brooklyn, went to the scene after the funeral home complaint emerged.

“While this situation is under investigation, we should not have what we have right now, with trucks lining the streets filled with bodies,” he later told the New York Daily News.

Mr Adams said they were alerted by “people who walked by who saw some leakage and detected an odour coming from a truck.”

By law, funeral directors must keep bodies in safe conditions that prevent infection before they are buried or cremated. The home has since been cited by health officials. 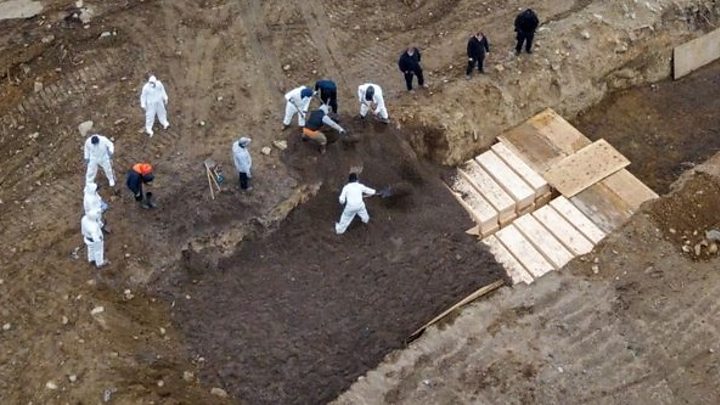 Mourners had gathered in large numbers to mourn the passing of a rabbi in Williamsburg.

“If in my passion and in my emotion I said something that was hurtful, I’m sorry about that,” Mr de Blasio said.

“I have no regrets about calling out this danger and saying we’re going to deal with it very, very aggressively.”