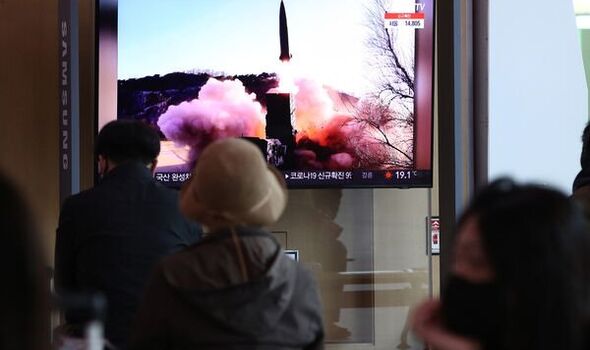 Pyongyang leader Kim Jong Un was pictured smiling and clapping after watching the launch of two projectiles from the state’s north-east coastline.

State news agency KCNA claimed the hardware was of “great significance in drastically improving the firepower” of its long-range artillery and “tactical nukes”.

The worrying news came weeks after the hardline state broke a five-year moratorium on long-range tests by firing an intercontinental ballistic weapon.

Western analysts believe the sabre-rattling display is a response to neighbour South Korea’s planned military exercises with America and the south electing a new conservative president.

They also fear the Communist leader – who was surrounded by his admiring generals in the official photographs – may go on to carry out a nuclear test.

The shorter-range missile would enhance the Communist leader’s ability to launch strikes against South Korean cities and American bases in Asia.

Duyeon Kim, senior analyst at Washington’s Center for a New American Security, said: “One reason for the political timing could be to protest anticipated U.S.-South Korea military drills.

“The test also tells his people that their country is strong despite their apparent economic difficulties.”

South Korea’s military said both missiles were fired on Saturday evening from the North’s Hamhung coastal region into the sea.

Satellite images suggested they travelled nearly 70 miles at a height of 80,000 feet and a speed of less than Mach 4 or 3,044 mph.

It added: “The new-type tactical guided weapon system is of great significance in drastically improving the firepower of the frontline long-range artillery units and enhancing the efficiency in the operation of tactical nukes.”

Pyongyang stopped nuclear testing in 2017 and a year later, blew up tunnels at its Punggye-ri nuclear site which were used for the trials.

But it is feared the peaceful stance has been reversed recently, with evidence that work has been underway to rebuild the tunnels.

On Friday, the country held a massive parade in Pyongyang to mark the birthday of Kim Jong Un’s grandfather and state founder Kim Il-sung.

On Saturday, the US 2nd Infantry Division, based in South Korea, shared photos of troops test-firing a multiple-launch rocket system.

Tomorrow, US special representative Sung Kim is due in Seoul for a five-day visit, to discuss a response to the North’s missile launches with his South Korean counterpart.

Lieutenant Colonel Marty Meiners, US Defense Department spokesman, said: “We are aware of the North Korean statement that they conducted a test of a long-range artillery system.