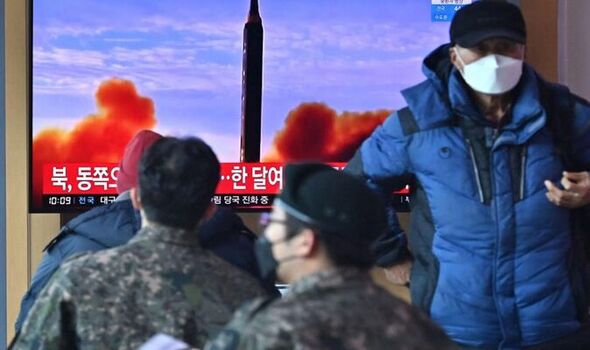 If confirmed, it would be the first test since the nuclear-armed country conducted a record number of launches in January. South Korea’s Joint Chiefs of Staff (JCS) reported that North Korea fired a suspected ballistic missile toward the sea off its east coast from a location near Sunan, where Pyongyang’s international airport is located.

The airport has been the site of previous missile tests, including two short-range ballistic missiles fired on January 16.

Analysts said the flight data did not closely match earlier tests and suggested it could be a medium-range ballistic missile fired on a “lofted” trajectory.

Japan’s Defense Minister Nobuo Kishi said in a televised statement: “There have been frequent launches since the start of the year, and North Korea is continuing to rapidly develop ballistic missile technology.”

He added Pyongyang was threatening the security of Japan, the region and the international community.

Washington condemned the latest launch and called on North Korea to cease destabilising acts. The US military’s Indo-Pacific Command sought to calm fears, saying the test did not pose an immediate threat.

North Korea’s last test was on January 30, when it fired a Hwasong-12 intermediate range ballistic missile.

The largest weapon test-fired since 2017, the Hwasong-12 was reported to have flown to an altitude of about 1,200 miles (2,000km) and range of 500 miles (800km). That launch capped a record month of mostly short-range missile firings in January.