There is an urgent need to rebuild trust in leadership, say experts, after multiple failures in UK government strategy. 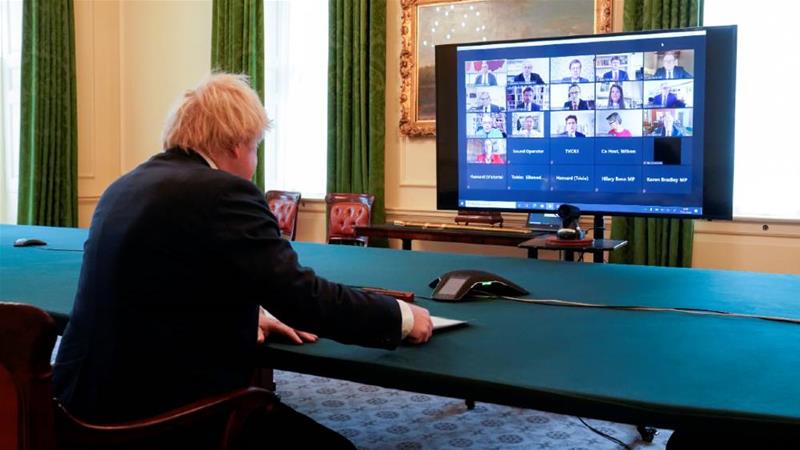 London, United Kingdom – The United Kingdom has one of the world’s worst per capita death tolls from coronavirus, according to Oxford University research based on data from the European Centre for Disease Prevention and Control.

At the start of this week, it was the world’s worst.

But the countless stories of personal grief echoing around social media have given way to a raw and visceral anger directed at the government’s handling of the crisis, which many see exemplified in the actions of Dominic Cummings, Prime Minister Boris Johnson’s right-hand-man and a principal architect of government strategy, when he flouted lockdown restrictions and refused to apologise.

On Wednesday, Johnson appeared for the first time in front of the Liaison Committee – a sort of supergroup  of parliamentary select committees whose purpose is to hold the prime minister to account.

He had wanted to tout the launching of the long-awaiting test-and-quarantine programme in England, which is to start on Thursday and is key to government plans to ease the lockdown.

It will “unlock the prison”, so the “captivity of a tiny minority for a short time will allow us to release 66 million people from the current situation”, he told MPs in their teleconferenced meeting.

The programme, which launches months after strong calls from experts to institute such a scheme, will not be supported by the mobile phone app currently in testing, but “will be getting steadily better to become a truly world-beating test and trace operation in the course of the next days as we go through June”, Johnson added. 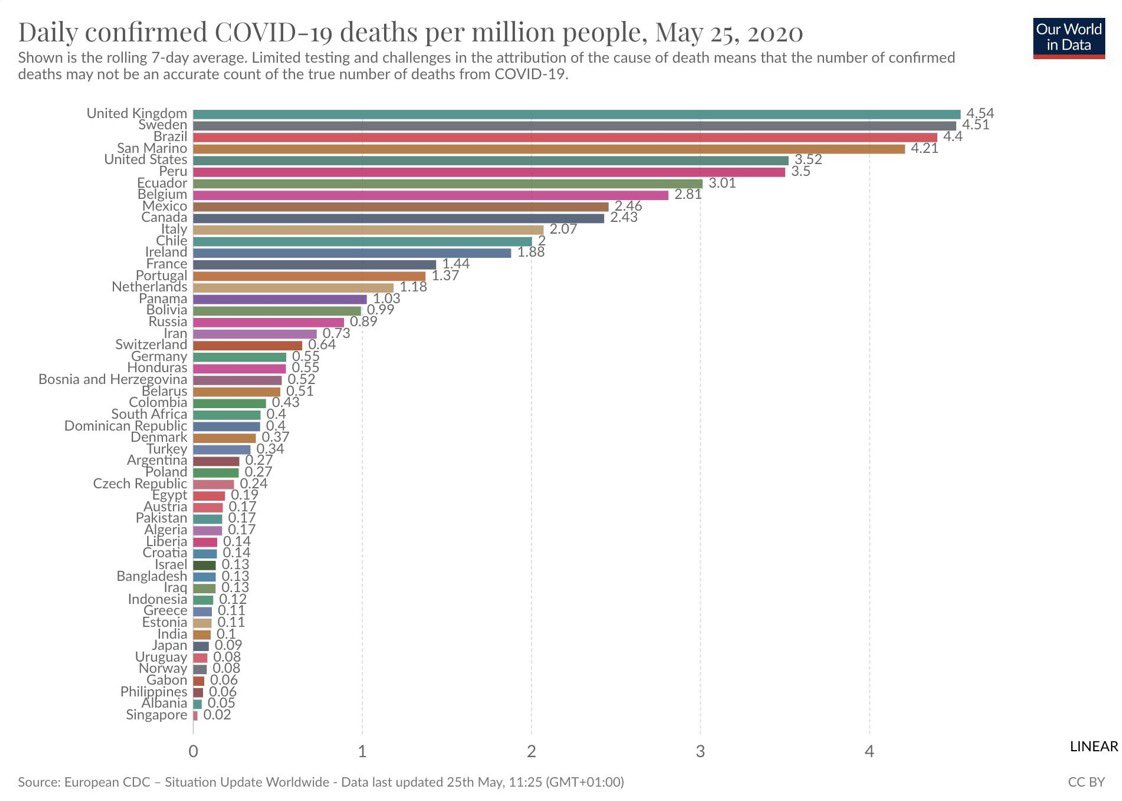 Johnson’s performance in front of his inquisitors left a lot to be desired, Mark Shanahan, head of the Politics Department at the University of Reading, told Al Jazeera:

“Why is it that when the country’s crying out for a straight man, they send in the clown? Johnson’s bluster in front of the House of Commons Liaison Committee today was not quite a car crash – rather all four wheels on whatever political vehicle he was attempting to drive fell off.”

Johnson has been scheduled to appear for a grilling several times in his 10 months as prime minister, yet each time he has delayed, postponed or cancelled his interrogation.

The first chunk of Wednesday’s appearance was taken up by questions about Cummings.

As 44 of Johnson’s own Conservative MPs joined a majority in overnight polls – even among Conservative voters – calling for the senior aide’s sacking, they were not questions the prime minister was eager to answer.

Cummings has been accused of seriously undermining the nation’s public health strategy by appearing to ignore the lockdown rules when, convinced he had coronavirus, he took his sick wife and their four-year-old son on a 260-mile (418km) journey to isolate at his parents’ farm, instead of abiding by the government’s messaging of “stay home, save lives, protect the NHS”.

“You have a choice between protecting Dominic Cummings and the national interest. Which is it?” Yvette Cooper, a senior Labour member of Parliament who heads the Home Affairs select committee asked the prime minister.

Johnson answered: “Well, I think my choice is the choice the British people all want us to make, Yvette, and that is as far as we possibly can, to lay aside party-political point-scoring and to put the national interest first and to be very clear with the British public about what we want to do and how we want to take this country forward.”

His appearance was emblematic of his handling of the crisis, added Shanahan.

“His rallying cry to ‘move on’ from the Cummings fiasco was woeful,” Shanahan told Al Jazeera.

“He failed to answer any of the questions posed, or to mount any reasonable defence for his senior adviser’s immensely questionable actions. Worse still, he had nothing but soundbites to offer on the science of COVID, on the economy or on anything else posed.

“The questioners were largely forensic, the answers were superficial. And this sums up Johnson – not just today, but throughout his time in Number 10. He’s an eager frontman, strong on boosterism, weak on leadership. It’s not just that he doesn’t do detail, he can’t do seriousness and is simply out of his depth when a calm and steady response is required. Today’s performance? Lamentable. His overall handling of the crisis? Not much better.”

‘Benefit of the doubt’ lost

The government’s decisions during the pandemic have been fiercely criticised. A failure to join a European Union-wide purchasing scheme to bulk-buy medical ventilators was blamed on an email mishap. A lack of tests was blamed on a shortage of certain chemicals, yet chemical producers in the UK said they were never asked to produce more. An attempt to remedy a shortage of Personal Protective Equipment (PPE) by making a huge purchase from Turkey was announced the day before the order was even placed, and when it arrived much of it was unsuitable.

Until this weekend, however, the British public appeared willing to give Johnson the benefit of the doubt, believing, according to polls, that the government was doing its best in an unprecedented situation.

But as reports of the Cummings family road trip gave a face to the anger felt by many, it was also reported by the Sunday Times that the government’s delay in imposing restrictions saw cases rocket from an estimated 200,000 to more than 1.5 million before the lockdown was introduced.

A poll on Tuesday night saw government support drop by 9 percent, cutting the Conservatives’ lead over Labour from 15 points to six. 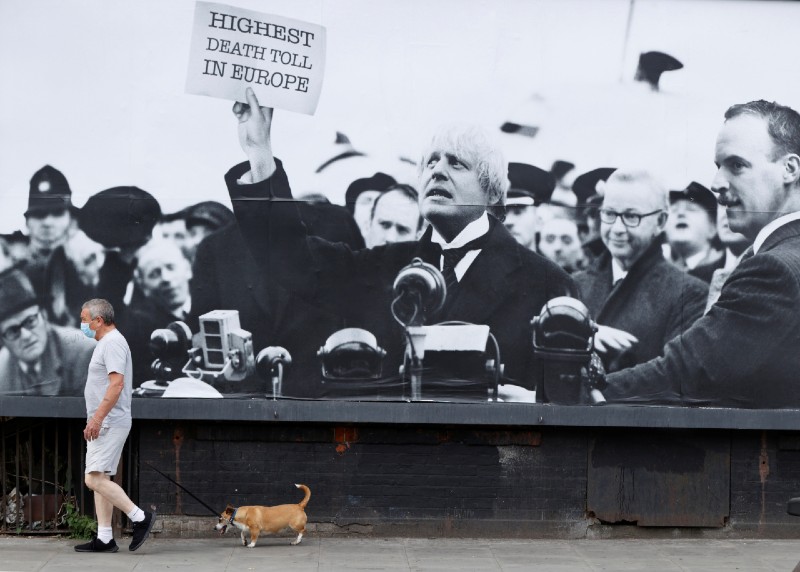 Johnson, hostile to the idea of lockdown, had boasted at the beginning of March that he was still shaking people’s hands, even in hospitals where coronavirus patients were being treated. He also said Britons could “take it on the chin”. The Sunday Times investigation found he was eventually convinced of the necessity of lockdown on Saturday, March 14, but it was not imposed until March 23.

The delay of nine days, at a time when infections were doubling every three days, meant the UK had way more infections when it went into lockdown than any other European nation had when they took the same action. By May 5, the UK had the highest death toll in Europe. On Wednesday, the official death toll stood at 37,460, and is believed to be much higher.

One reason for the delay, given at the time, was that introducing lockdown restrictions “too early” would result in fewer people adhering to it for the long-term.

“I’m not sure where that came from,” Susan Michie, professor of health psychology at University College London, told Al Jazeera.

“We have a behavioural science subcommittee of SAGE (the government’s Scientific Advisory Group for Emergencies) which I sit on, and we weren’t asked to consider that. There are other behavioural psychology groups around government, but it wasn’t something we were asked about.”

And it’s not guaranteed to be true either, she added.

“Systematic reviews of quarantines in other countries do suggest a trailing off of adherence, associated with financial insecurity, increasing loneliness, frustration, boredom and so on. But if one is warned in advance, one can put things into place to overcome those obstacles and help ensure adherence to lockdown rules for longer.

“I think a lot of people have been amazingly surprised at how well people have adhered to the lockdown. They said it’ll never happen in London, for example. There’s no way to accurately say what will happen when lockdown is imposed, but adherence depends on people’s needs being met – financially, materially, emotionally and socially – and on people having continuing trust in government.”

But it’s not been all bad. When the government did impose lockdown, its messaging was clear: “Stay at home, save lives, protect the NHS.”

“This was a very good phrase, as it was behaviourally specific,” said Professor Michie. “The first part told you what to do. The second told you why, it provided a rationale. And third – ‘protect the NHS’ – was all about ‘do this for others, do this for your community’ – and that is a powerful emotional pull. All three taken together are important drivers of action.”

And on the economic front, the Treasury’s furlough scheme paid 80 percent of salaries for millions of workers stuck at home across the country.

“But people were always going to fall through the cracks of these schemes, and nowhere near enough has been done to strengthen Universal Credit, which is one of the weakest safety nets among advanced economies,” he told Al Jazeera. “The business loan scheme has also not gone well, as businesses have not been able to take on the risk and interest costs.”

And the financial help has not always gone to where it was most needed.

“Rentier sectors of the economy – landlords and banks, for example – have been relatively protected, whereas households and firms have taken on too much of the economic risk and pain. Banks have been able to profit out of business loans, and while landlords have had access to mortgage holidays, there has been no access to rent holidays. This means much of the government’s financial support into the economy will end up flowing to those who have most economic power, making inequality worse.”

It all comes back to leadership, said Michie.

“The main issue, aside from a lack of preparation and declining infrastructure after 10 years of funding cuts, and the failure to organise a ‘Test, Trace and Isolate’ programme, and to provide adequate PPE – but the main thing from a psychological point of view has been the failure to work with communities and develop partnerships,” she said. “There was too much in the way of top-down edicts.”

“The problem here is that, as is the case now, if the moral authority of the central government is undermined, there is nothing in place to replace and sustain it. When working in partnership with communities, not only do you have joint problem-solving, which is more effective and useful, but also more engagement and ownership in solutions, which means greater adherence and pulling together.

“There is now an urgent need to build up trust in leadership again.”