A jet from the Canadian air force’s aerobatics team that was on a tour intended to raise national morale during the coronavirus pandemic crashed on Sunday, killing one crew member and seriously injuring the other.

Video shot by a witness showed two of the Snowbirds’ Canadair Tutor single-engine aircraft taking off from what is believed to have been Kamloops Airport in British Columbia.

One of the aircraft subsequently climbed into the sky before rolling over and plunging to the ground.

The footage appears to show at least one person ejecting from the plane before it disappears behind trees and an explosion is heard.

“One member of the Canadian Forces’ Snowbirds team has died and one has sustained serious injuries,” the armed forces confirmed on Twitter. 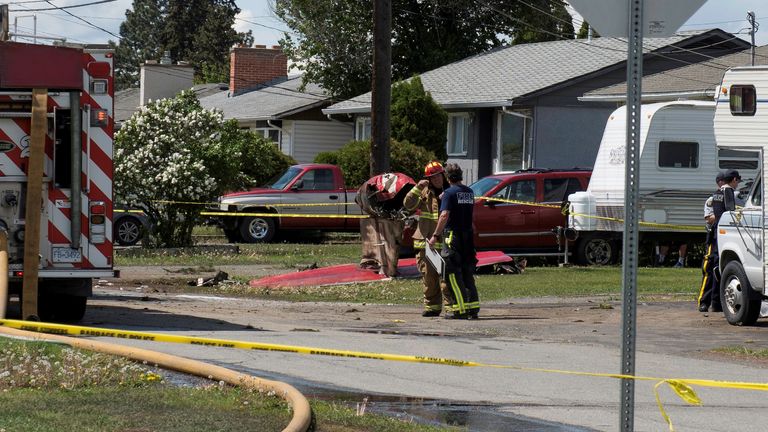 Officials in Kamloops – about 320km (200 miles) northeast of Vancouver in the West Coast Canadian province – said the jet hit a residential home, sparking a fire.

A photo posted by local television station CFJC showed at least one house on fire in the Brocklehurst area of Kamloops, a city with a population of more than 90,000.

Rose Miller lives directly across the street from where the plane hit.

She went to her front window when she heard the roar of jet engines.

Ms Miller said she heard a loud bang and wondered whether it might be a sonic boom. Then she watched the plane smash onto the ground.

“It looked to me like it was mostly on the road, but it just exploded. It went everywhere,” she said.

“In fact, I got a big, huge piece in my backyard. The cops said it was the ejection seat.” The Snowbirds have performed at airshows across Canada and the US for decades and are considered a key tool for raising awareness about and recruiting for the air force.

Eleven aircraft are used during shows, with nine flying and two kept as spares.

The air force obtained its Tutor jets in 1963 and has used them in air demonstrations since 1971.

Prior to Sunday’s crash, seven pilots and one passenger had been killed and several aircraft had been lost over the course of the Snowbirds’ history.