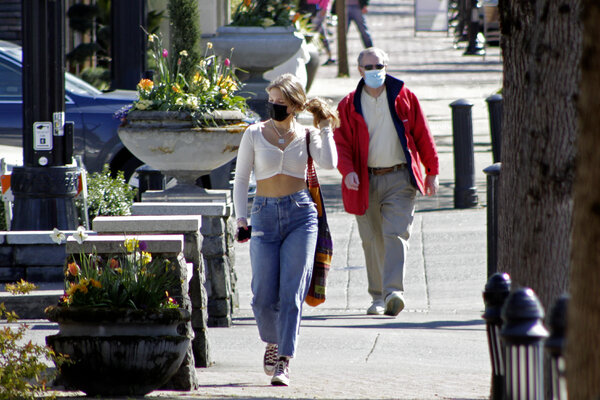 Oregon has lifted its mask mandate for people who have been fully vaccinated against Covid-19, but is requiring businesses, workplaces and houses of worship to verify the vaccination status of individuals before they enter buildings without a mask.

This statewide mandate, one of the first of its kind in the country, raised concerns that the procedure of verifying vaccinations could be too cumbersome for workers.

Many states have lifted mask requirements without requiring confirmation that individuals have been vaccinated. New York lifted its mask mandate on Tuesday for vaccinated people, though businesses will be allowed to enforce stricter rules. Some Republican governors, like Gov. Greg Abbott of Texas, have instead not only lifted mask rules but banned local governments from enforcing their own. Gov. Ron DeSantis of Florida, also a Republican, issued an executive order last month prohibiting businesses from requiring vaccine documentation.

The notion of relying on the honor system, which some states and businesses have adopted, has raised its own questions. And business groups in Oregon expressed concerns that a mandate to check vaccination status could become — like mask enforcement — a difficult and potentially dangerous proposition for workers.

“We have serious concerns about the practicality of requiring business owners and workers to be the enforcer,” said Nathaniel Brown, a spokesman for Oregon Business and Industry, which represents companies like Nike, as well as small businesses. “We are hearing from retailers and small businesses who are concerned about putting their frontline workers in a potentially untenable position when dealing with customers.”

The Oregon Health Authority said in new guidance on Tuesday that effective immediately, businesses would be required to continue to enforce mask requirements unless they had established a policy to confirm proof of vaccination using a card or photo of one before individuals can enter the building without a mask.

Gov. Kate Brown, a Democrat, said last week that Oregonians who were fully vaccinated no longer needed to wear masks in most public settings, except in places like schools, public transit and health care settings.

But she quickly noted that businesses would have “the option” of lifting mask requirements only if they instituted verification procedures. “Some businesses may prefer to simply continue operating under the current guidance for now rather than worrying about vaccination status, and that’s fine,” she said.

A spokesman for Fred Meyer, a grocery store chain in the Pacific Northwest owned by Kroger, said that it would continue to require customers and employees to wear masks in its stores.

New York has created the Excelsior Pass, a digital proof of Covid-19 vaccination, which will be used at some sites like Madison Square Garden and Radio City Music Hall. Jen Psaki, President Biden’s press secretary, reiterated on Monday that the federal government would not be issuing “vaccine passports,” the development of which she said should be left up to the private sector.

Charles Boyle, a spokesman for Gov. Brown, said that “businesses that do not want to implement vaccine verification can keep current health and safety measures in place, which includes masks and physical distancing for all individuals.”

Asked if businesses would face penalties for allowing customers to go maskless without checking their vaccination status, Mr. Boyle said that “in the past year state agencies have issued fines for businesses that are out of compliance with health and safety guidance.”