Cooking something new for Thanksgiving is always a risk. An uncle might complain. An aunt might forbid it. The recipe could take longer than expected. Chaos ensues.

Straying from tradition can feel emotionally loaded, but it might be worth it. For many families, Thanksgiving will be different this year. If the usual cook isn’t cooking and the table isn’t full, why stick with exactly the same food? It’s a chance to try something new, especially for first-time holiday cooks. 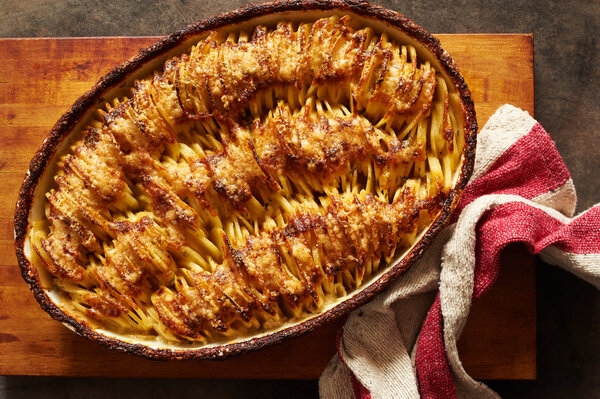 Two potato dishes are high priority, and I always make them both: the crispy-topped, cheesy Hasselback potatoes, adapted by Emily Weinstein from J. Kenji López-Alt, and the soft, airy almost Robuchon-style mashed potatoes (passed through a ricer and mixed with as much butter and cream as they can possibly hold) from Kim Severson. TEJAL RAO

Some people might give a side eye to salads at Thanksgiving. But Julia Moskin’s lemon-garlic kale salad is always a hit. It’s the perfect tangy-green counterpoint to all of the brown stuff on the plate. Even my 8-year-old loves it. MARGAUX LASKEY

I’ll be honest, I’ve never actually made this. I’m not a baker. But my partner does so every year, and it’s one of my favorite Thanksgiving desserts. (Do not fear the corn syrup!) I always look forward to a leftover slice with a cup of coffee the next morning. MARK JOSEPHSON

Our family matriarch died before I was old enough to get her recipe for sticky rice stuffing. This version, adapted by Ligaya Mishan, helped me recreate it. GENEVIEVE KO

I made David Tanis’s cranberry curd tart for good luck before my New York Times interview, and it hasn’t failed me since. Manifest your dreams! VAUGHN VREELAND

I choose a different turkey recipe every year; my family said that Melissa Clark’s rosemary and citrus turkey was the best I’ve ever made. And if you haven’t had Millie Peartree’s Southern macaroni and cheese, adapted by Kiera Wright-Ruiz, I’m not sure you’ve really lived. EMILY WEINSTEIN

A true 30-minute side that is deeply flavorful, these carrots are equally good straight out of the oven or at room temperature. They have just the right amount of nuance to stand out, but can still mingle with the rest of the Thanksgiving spread. ALEXA WEIBEL

I’ve been tasked with making empanadas for Thanksgiving since I was 12 or 13 years old. These beef empanadas by Angela Dimayuga are perfect for making big batches (and snacking on before dinnertime). GINA FERNANDEZ

There are many reasons to love Kim Severson, but high among them is her delicious recipe for roasted sweet potatoes with cranberry chutney. SAM SIFTON

Some years ago, Julia Moskin made a convincing case that every Thanksgiving plate needed a snappy respite. I’ve been making her adaptation of this quick and lemony brussels sprouts hash ever since. KIM SEVERSON

Kim Severson adapted this quick and dirty recipe for a smallish turkey, and it’s perfect for Thanksgiving 2020. It makes the best and juiciest leftovers. JULIA MOSKIN

Pumpkin bread is a requirement on my Thanksgiving dinner plate. I really like when it soaks up some of the gravy. That salty-sweet combo is one of my favorite bites. SCOTT LOITSCH

My daughter always requests mashed potatoes, and, after trying many different recipes, we found this recipe from David Tanis to be our favorite. The cheese is great, but the addition of an egg, which I’d never used before, makes the potatoes extra creamy and delicious. KIM GOUGENHEIM

My grandmother made fresh rolls for every holiday meal. In recent years, I’ve turned to this recipe, forming the dough into clovers, as my grandmother did. SARA BONISTEEL

The Thanksgiving menu can easily turn into a whiteout of bland flavors and mushy textures, but David Tanis’s sprouts always bring mine to life with the zing of smoky chorizo and pimentón. PATRICK FARRELL

On our Thanksgiving table, mashed potatoes have given way to my own gratin, but not if I’m making Susan Spungen’s excellent mushroom bread pudding. It doubles as a side dish and alternate stuffing, especially with sausage added. FLORENCE FABRICANT

Turns out, pumpkin pie is even better when made with fresh butternut squash purée; this one is our go-to and it is divine. MELISSA CLARK

This smoky, just-meaty-enough dressing is always a hit with my dad and brother. I can’t be with my family this year, but, maybe if I make this, it’ll feel close enough. KRYSTEN CHAMBROT

My family is divided on having salad at Thanksgiving, but this hot-meets-cold option feels like a win — not just a compromise — for all parties involved. BECKY HUGHES

The squash-onion topping in this recipe, adapted by Mark Bittman, is a secret weapon: It’s extremely flavorful, can be made many days in advance and only gets better as it sits in your fridge. Smear it on toast with ricotta or goat cheese for a quick Thanksgiving appetizer, et voilà, you’ve bought yourself time to finish the meal. EMILY FLEISCHAKER