Violence erupted on the streets of Paris on Saturday following brutal clashes between riot police and thousands of protesters. The protesters were marching against new police powers, as well as the French President Emmanuel Macron’s blundering coronavirus pandemic policies. Sky News’ Europe correspondent Adam Parsons said that frustration “about the government and about its management of the pandemic” boiled over on Saturday.

The protest was originally intended to rally against a new police surveillance law, which restricts the ability of people to post pictures of law enforcement officers online.

However, Mr Parsons said the demonstrations “became a sort of calling card for all sorts of grievances, including those unhappy about how the French government has handed the pandemic and the vaccine rollout”.

Those joining the demonstrations included activists from the yellow vests movement that gripped France for more than a year before the pandemic restricted large-scale protests.

The Sky correspondent said: “This was meant to be a protest against new police powers, instead it descended into violent clashes.”

JUST IN: France in DEEP recession: Macron faces battle to save economy 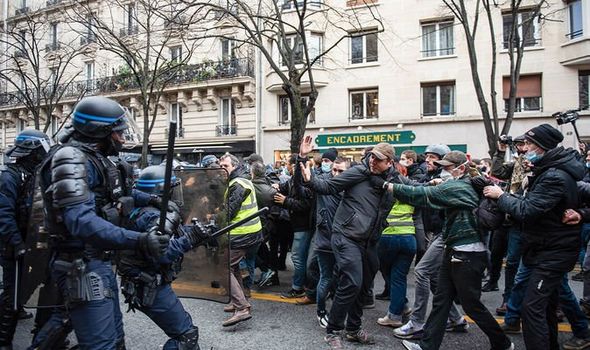 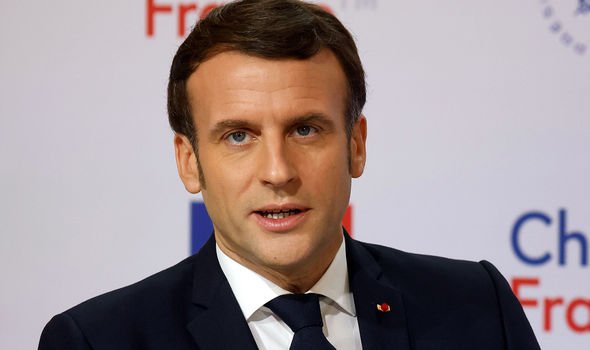 Mr Parsons continued: “France is a frustrated country: under curfew for 12 hours a day, and so far hobbled by a sluggish vaccine rollout. That frustration boiled over.

“What started as good natured demonstration about the shortcomings of the way the French government has handled this pandemic has now degenerated into a series of very angry conflicts between the demonstrators and the French riot police.”

One protester, Sebastian, told Sky News: “There is frustration here in France because people think we are not doing things as well as other countries.”

During the melee, riot police were deployed to clear the Place de la Republique in the centre of the capital.

France: Clashes break out at student demo in Paris 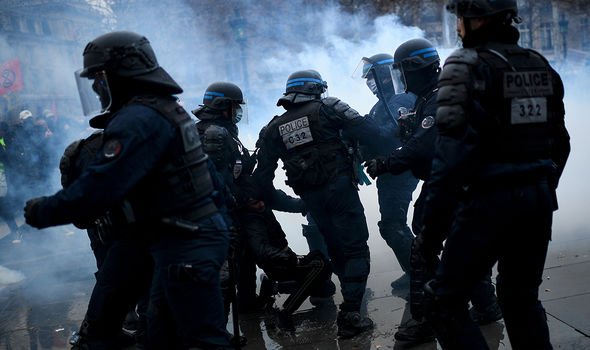 Water cannons were also used to disperse protestors just before 6pm local time, when a curfew kicks in each day.

Organisers estimated that around 33,000 people attended the demonstration.

New coronavirus rules were announced on Friday evening, which mandated shopping centres to close and the country’s borders to shut, while the police were ordered to step-up checks. 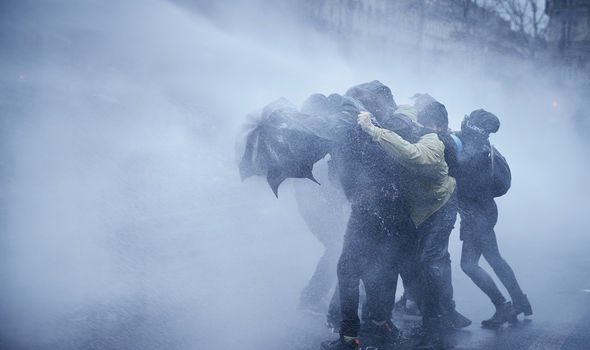 France is also struggled to deal with the low number of vaccine doses being delivered to the European Union.

Some hospitals on the outskirts of Paris have been forced to stop providing Covid vaccinations due to the supply crisis.

On Friday, Mr Macron made bizarre and unsubstantiated claims that the AstraZeneca vaccine, which was developed alongside Oxford University, was not effective in over-65s.

A new poll this week showed that populist National Rally leader Marine Le Pen would beat Mr Macron in the first round of voting if the presidential election was held today.

The new Harris Interactive poll also showed that a final round head-to-head presidential runoff would see Ms Le Pen garner 48 percent while Mr Macron would be re-elected with 52 percent.