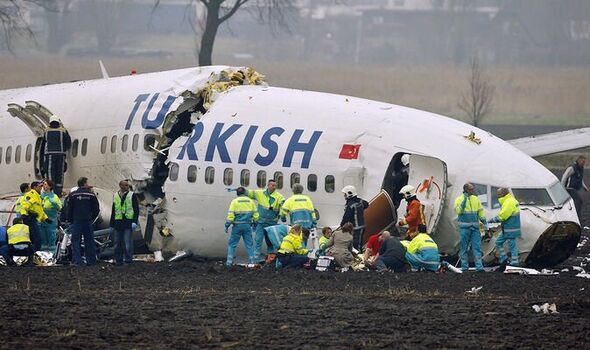 The nation’s aviation authority has said the AnadoluJet flight TK7709, due to take off from Ben Gurion Airport on Tuesday morning, had been taxiing when the incident occurred. Investigating authorities have reportedly detained several passengers, believing the source of the startling content was “inside the plane”.

According to reports in the Israeli press, 160 passengers had been on board the Boeing 737, which had been preparing to take off from Tel Aviv, when passengers received the images.

The images were shared using AirDrop – a feature of Apple products that allows users to send files between devices in close range.

When passengers alerted the flight crew that they had received the images, the captain was informed and opted to return to the terminal.

The images showed the crash site of a plane owned by Turkish Airlines, the parent company of AnadoluJet, in the Netherlands in 2009.

That crash, which took the lives of nine people and left a further 120 injured, had stalled as it came into land at Amsterdam’s Schiphol Airport.

Ynet news reported the images also included those of another plane crash, which happened in the US in 2013.

Authorities said nine passengers – reportedly young people from the north of Israel – had been held for questioning after the incident.

“The Israeli police and other security officials are also investigating the incident.”

He described the incident as a “cyber-attack”, and added that “the source of the videos [was] inside the plane”.

The IAA said that the plane would be allowed to take off once it had been established that there was no risk to those on board.

Originally scheduled to take off at 9.55am local time, the flight eventually departed just before 3.40pm – a delay of nearly six hours – flight radar data shows.

It landed in Istanbul without issue at 5.24pm this evening.

Mr Lefler said: “All steps taken were in cooperation and coordination with the flight captain, who has shown great responsibility in the decision to return the aircraft to the terminal.”

One of the passengers recounted the experience to Kan News, saying: “We got on the flight and the plane started moving.

“Most people received a request for a photo confirmation in AirDrop, some approved and some did not. The plane stopped and the flight attendants asked who got the picture.”

The unnamed passenger added that when the plane was “full of cops, we realised there was an incident.

“The airport manager told us there was a security incident, they took all our luggage out of the plane for a second check.”

Israel has been on high alert for potential terrorist attacks following a rise in violence in recent months.

Today’s incident comes a fortnight after another security scare at Ben Gurion, in which an American family attempted to take a live artillery shell home as a souvenir, which sparked panic.

The shell was believed to be a relic of the Six Days War between Israel and Syria in the 1960s.