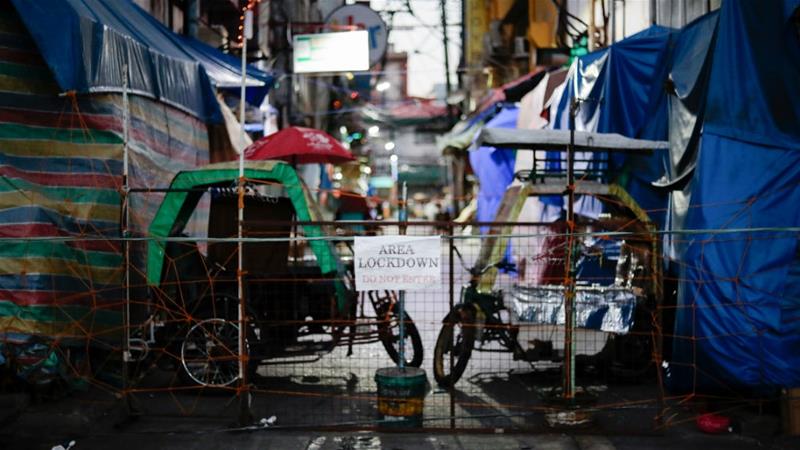 Manila, Philippines – On the day her husband was arrested, Bernadeth Caboboy had 200 Philippine pesos (about $4) in her pocket and her fidgety three-year-old daughter in her arms. The toddler needed milk and they needed food, but had no money to buy either.

It had been three weeks since the lockdown to curb the spread of COVID-19 was declared, and 21 long days since operations at the construction site where her husband worked had stopped.

Their neighbourhood of San Roque in Quezon City, the country’s largest metropolis, got neither food nor aid from the government. Caboboy’s husband, Jek-Jek, decided to meet his foreman to see if he could get his salary.

When Jek-Jek went out, he was swept up in a throng of people who were waiting for the rumoured distribution of relief goods.

“Someone shouted that a charity was going to give away a half-sack of rice,” Jek-Jek recalled. “People started lining up on the side of the road. The next thing I knew, the police came, telling us to get on the ground.”

Jek-Jek and 20 other residents of San Roque were arrested on April 1 and charged with violating quarantine protocol, disobedience and illegal assembly. 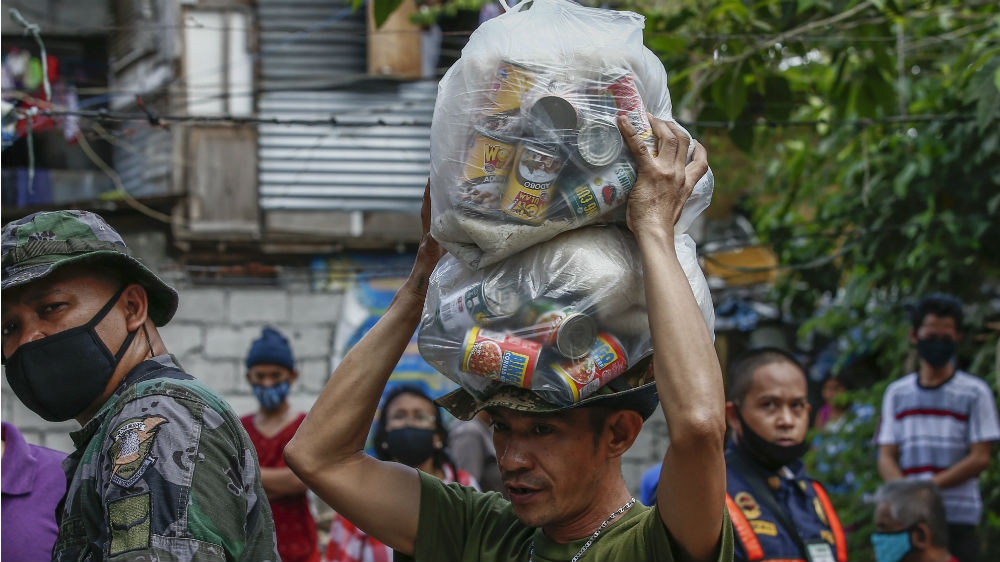 Footage of police with riot shields and batons violently dispersing the crowd went viral. Concerned citizens put together 367,500 pesos ($7,350) to bail out the San Roque 21 after five days in detention.

Critics warn that the Philippine government’s heavy-handed approach to the public health emergency is criminalising the poor for violating quarantine protocols that are impossible for them to follow, quashing their legitimate pleas for food and economic aid, and putting them at risk of infection in cramped detention centres.

“While they were in police custody, there was no social distancing. There were no proper hygiene facilities or supplies. Doesn’t their arrest defeat the purpose of stopping the spread of the virus?” said Kristina Conti of the National Union of People’s Lawyers (NUPL) and lawyer for the San Roque 21.

Police data shows that 42,826 arrests were made in the first 11 days of the country’s enhanced community quarantine

Philippine National Police (PNP) spokesman Bernard Banac confirmed to Al Jazeera that the arrests were due to alleged violation of quarantine policies like curfew, mass gathering and social distancing.

Police authorities said they had initially decided to be lenient with people who breached the quarantine out of compassion and due to a “lack of jail facilities”, but they could not continue to be easy-going.

“Based on our assessment, the number of curfew violators will just continue to rise if we become lenient on them. Our message to the public is clear: we will continue to arrest any person who will violate the curfew,” said PNP Deputy Chief for Operations Guillermo Eleazar in a statement.

Philippine President Rodrigo Duterte declared the enhanced community quarantine in the main Philippine island of Luzon on March 17. Public transportation was suspended, commercial establishments were closed, and checkpoints set up to seal off city borders.

The government announced a 200 billion peso ($3.9bn) economic cushion designed to tide citizens over during the quarantine.

But implementation has been bogged down by complicated administrative processes and bureaucratic confusion arising from conflicting and overlapping roles of different government agencies.

“Now is not the time to fine-tune the criteria of who is deserving of government aid and who is not. During this period of intensified and widespread poverty, they are all deserving,” said Maria Victoria Raquiza, a professor of public administration at the University of the Philippines.

Similar quarantine measures were implemented in various provinces, leaving everyday life and the economy in limbo.

“Some of their homes are the size of someone’s bathroom, and more than one family lives there. They mostly work in ‘no work, no pay’ jobs in construction, transport, and street selling. Without timely government aid, they will go out to look for food or ways to make money,” added Conti.

In an interview, Rannie Ludovica of the Quezon City police defended the arrest of the San Roque 21 and accused the urban poor group, Kalipunan ng Damayang Mahihirap (KADAMAY), of having organised a rally that day, “blatantly taking advantage of the current crisis” and violating the rule prohibiting mass gatherings. 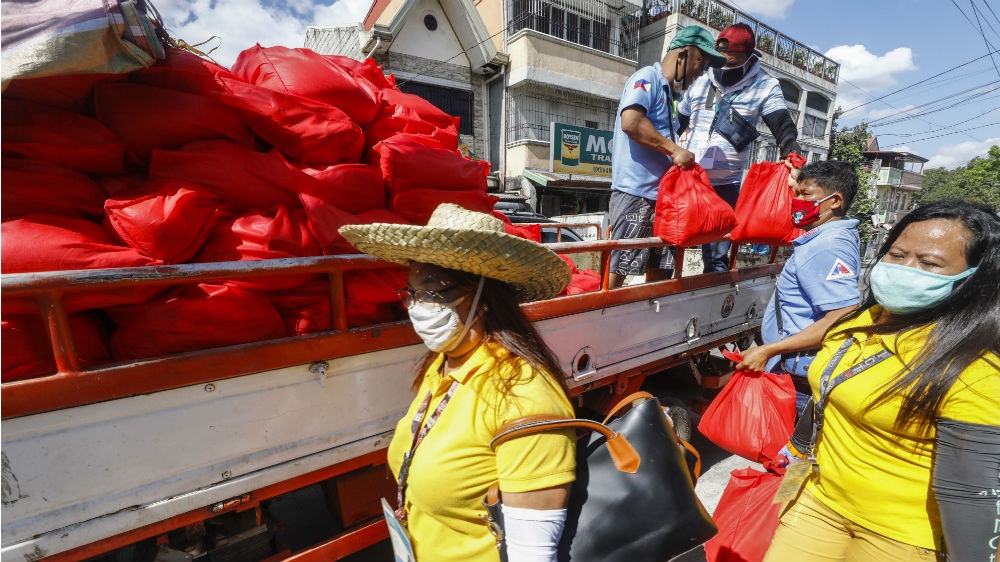 Quezon City Mayor Joy Belmonte has been criticised for the slow and unequal distribution of food aid to needy communities. Ludovica admitted that only about 2,500 of the 7,000 families in San Roque had been given food aid but said, “These things take time. We are doing everything we can.”

Addressing the nation after the arrest of the San Roque 21, Duterte accused KADAMAY of instigating social unrest and issued a warning to “troublemakers”.

“I will not hesitate to have my soldiers shoot you,” Duterte said.

KADAMAY denied the accusation and said the assembly was spontaneous, caused by the rumour spread that there would be food distribution, which people responded to in their desperation and plain hunger.

“The president is always boasting about what his police and military can do. We’re not scared of him. Hunger and the virus will kill us before bullets will,” said Bea Arellano, KADAMAY chairperson.

An extension of the quarantine to the end of the month has made the situation even more dire.

On April 5, 19 vegetable vendors were arrested for illegal selling. They said they were only selling their goods because they were afraid to go hungry.

The day before, a 63-year old man was shot dead after threatening village officials and police with a scythe at a checkpoint in the southern province of Agusan Norte. The incident is the first reported case of the police shooting a civilian for refusing to follow lockdown restrictions.

In a press briefing, Department of Interior and Local Government (DILG) Under-Secretary Jonathan Malaya said the police response was in self-defence, and not only because the man was violating curfew.

Experts say that from a security and logistical standpoint, the use of law enforcement during a pandemic may be warranted.

“The military has the largest, most capable, most flexible assets for the transport of much-needed supplies throughout the country,” said defence analyst Jose Antonio Custodio.

However, the appointment of former high-ranking military officers to lead the national taskforce for COVID-19 has meant the Philippines is taking a largely punitive approach to address a public health emergency.

“As the top leadership is staffed by ex-military officers, the tendency to use threats and force to address problems of discontent arising from the quarantine have sometimes backfired. The leadership of the Health Department is sorely missed and is seen as being not in step with the needs on the ground,” said Custodio.

As of April 13, the Philippines has a recorded 4,932 COVID-19 cases – the highest in Southeast Asia – and 315 deaths. Thousands are in hospitals awaiting testing or test results. Some test results are released after the patient has died, adding to an underreported number of infections.

“The Philippines, because of the lockdown, is not experiencing so-called large-scale community outbreak,” World Health Organization (WHO) Western Pacific Regional Director Takesgu Kasai said in an interview.

Sceptics say the low number of cases is because of the low rate of testing. The Philippines lags behind its regional neighbours in terms of testing and is only going to roll out a more aggressive programme from April 14. 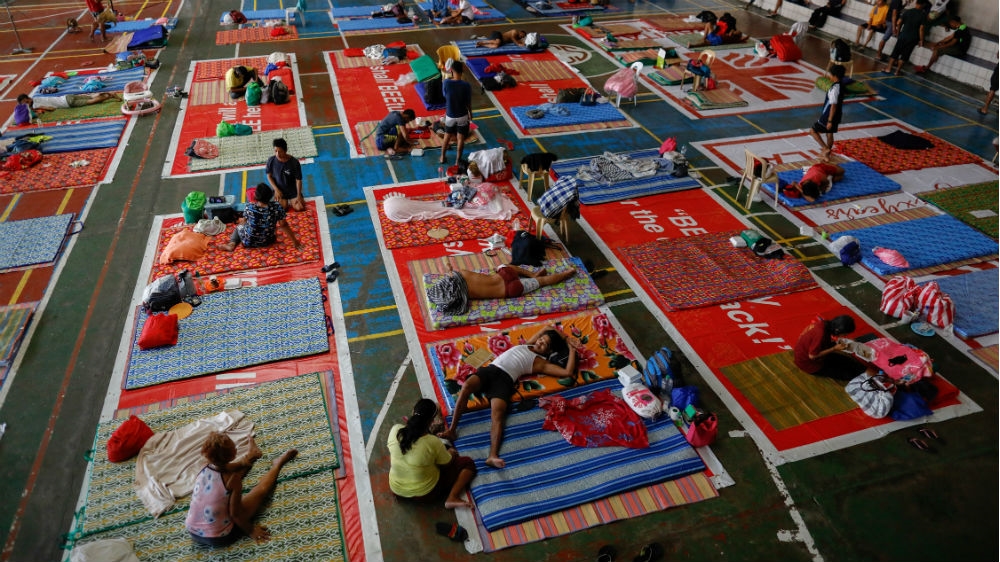 The government has maintained that quarantine measures and their extension are necessary to increase testing capacity and prepare quarantine facilities.

“Our lockdown has been effective in pushing down the curve [of infections] toward a one-month delay. It gave us time to improve our medical services,” Secretary Carlito Galvez said in a news briefing.

However, aid has not come fast enough to buy time for the estimated 15.6 million workers in the informal economy for whom survival is a daily struggle.

And then there are the homeless – an estimated 4.5 million Filipinos who might also be working in the grey economy. Close to 70 percent of the homeless population are in Metro Manila and survive by begging, or collecting and reselling plastic and metal scraps.

Flavie Villaneuva, a priest with the Society of the Divine Word, has been running a homeless shelter in Manila for years. Two days into lockdown, authorities disrupted its operations, saying it violated quarantine procedures.

A cafe in Quezon City that converted into a temporary homeless shelter was also shut down by village officials.

“COVID-19 has vividly reminded us of the plight of the discarded community of the homeless. What serious government programme do we have for them?” asked Villanueva.

Villanueva, together with a network of Catholic churches and schools, is housing about 430 homeless people.

Last week, a 66-year-old homeless man was found dead on the streets not far from the capital of Manila.

“That’s only the first one. There will be more,” Villanueva said.