On Tuesday, President Zelensky signed a decree saying the annexation of the Donetsk, Luhansk, Kherson and Zaporizhzhia regions was illegal. Last week, Vladimir Putin said the areas had rejoined the “historic motherland” after the regions, which are currently under military occupation by Russia, voted in a referendum if they should rejoin the country.

The decree President Zelensky signed formalised the comments he made on Friday when the Ukraine leader said he would not sit down for peace talks with Russian President Vladimir Putin.

President Zelensky said: “He does not know what dignity and honesty are. Therefore, we are ready for a dialogue with Russia, but with another president of Russia.”

Dmitry Peskov, the spokesman for President Putin, told journalists that Russia would not end its “special military operation” if peace negations were ruled out, and added it “takes two sides to negotiate”.

Mr Peskov continued: “We will wait for the incumbent president to change his position or wait for a future Ukrainian president who would revise his stand in the interests of the Ukrainian people.”

President Putin, who celebrates his 70th birthday this week, could run for two more terms under the constitutional reforms he put in place, and could remain as Russia’s leader until 2036. 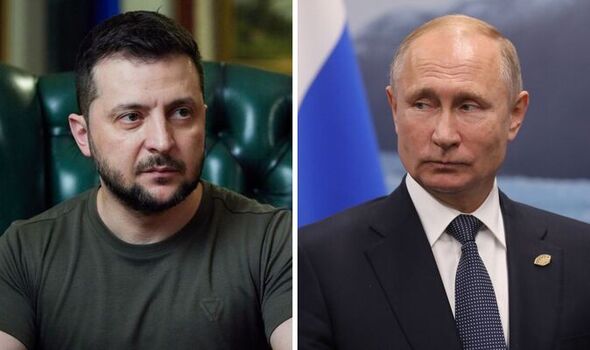 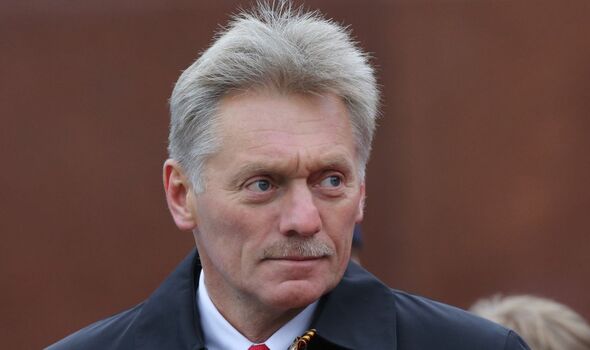 Despite the Russian president’s confidence, Ukraine has said it is making “rapid and powerful” gains in retaking territory from Russia this week and they have liberated “dozens” of villages in the east and south.

The latest battlefield maps from the Kherson region in Ukraine show that Russian military forces have left many areas in the region.

Maps in the eastern Kharkiv region also seem to indicate the Russian army has almost completely abandoned the eastern bank of the Oskil River, which could give the Ukrainian military an advantage to stop key Russian transportation and supply routes.

Illia Ponomarenko, a journalist for the Kyiv Independent said on Twitter: “Good lord, Russian front is apparently collapsing in the south.

“I just can’t keep up with reports on newly-liberated towns coming every other hour.” 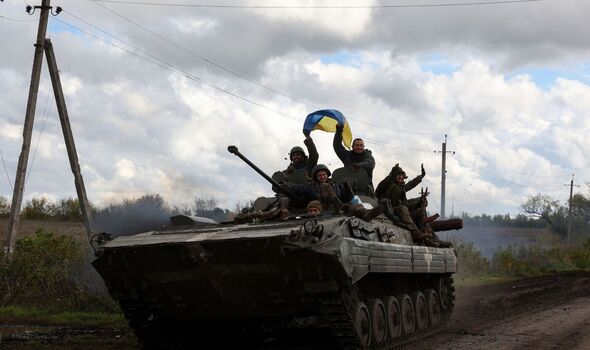 President Zelensky said that many settlements had been reclaimed “from the Russian pseudo-referendum this week alone.”

The Ukrainian leader listed eight villages that Ukraine has recently liberated, and added: “this is far from a complete list.

“Our soldiers do not stop. And it’s only a matter of time before we expel the occupier from all of our land.”

This weekend, Ukraine retook the city of Lyman, which was a key area in the war as the Russian military used Lyman as a hub for transportation and to move supplies.

A Russian blogger published an interview with two Russian soldiers who had narrowly escaped being surrounded by the Ukrainian army.

One of the men, named Mikhei, said: “We left Lyman, but it was just us – no munitions, nothing. Everything was burned up. All our friends and comrades stayed there [dead].”

Ukraine’s Defense Ministry has said that the Russian army is demoralised and in Kherson, has attempted to destroy bridges to try and slow down Ukraine’s counterattack.

Kirill Stremousov, a Rusian installed official in Kherson, reportedly told residents that “there is no reason to panic.”

Margerita Simonyan, a Russian propagandist who is the head of the Russian television network RT has said that military commanders should be replaced.

She listed the Russian military’s failures as: “Cowardice, wilful abandonment of strategic positions without coordination with higher command, the collapse of command and control of the troops, inaction of power.”