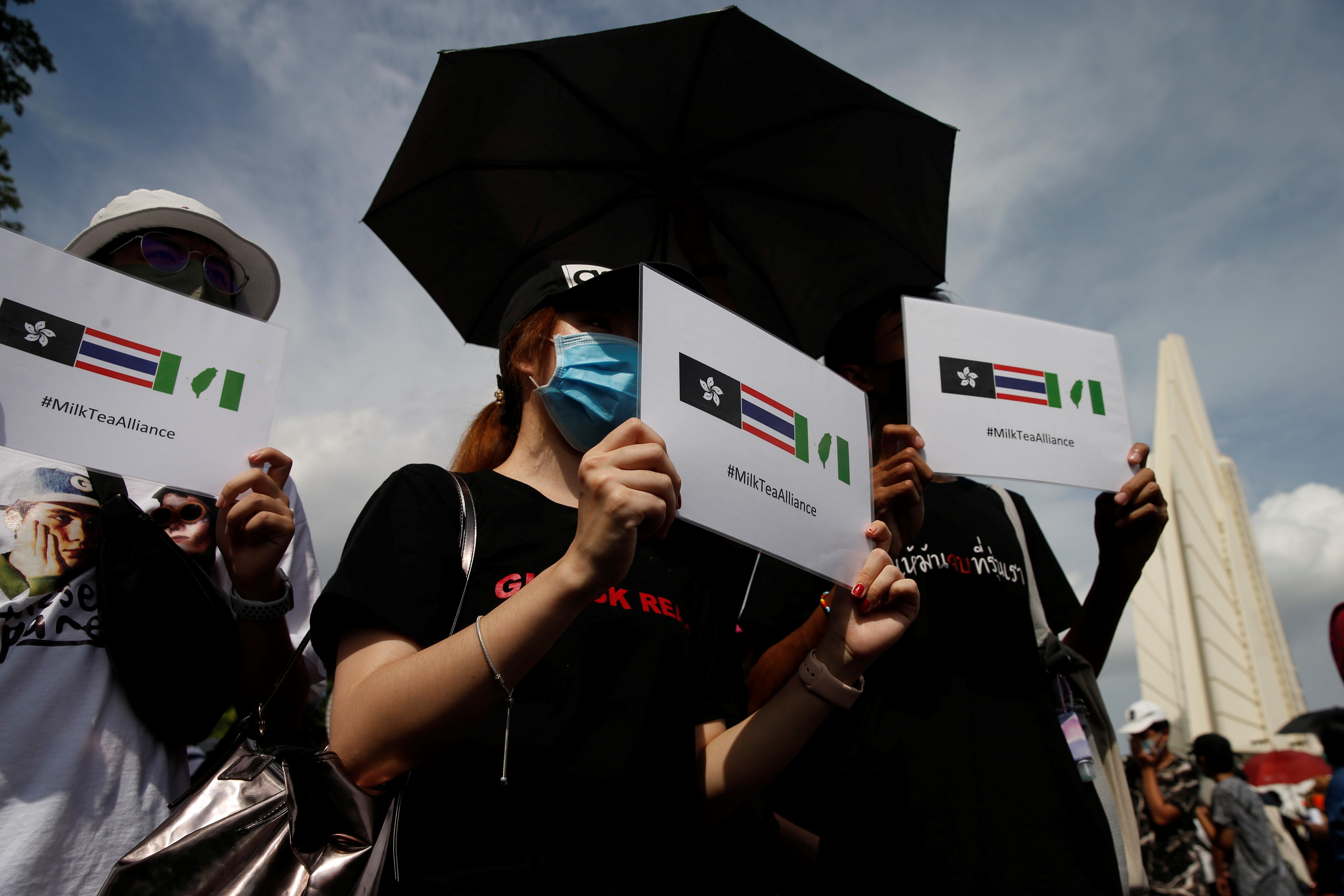 In Bangkok, flags representing Hong Kong and independence for Taiwan appeared on a sign bearing the tag at the biggest demonstrations in years.

And in Taipei, dozens of people gathered to back the Thai protests and give weight to a nascent community of cross-border youth movements pushing for democracy at home and uneasy with China’s growing regional power.

“This is the first physical expression of the Milk Tea Alliance,” said Thai student Akrawat Siripattanachok, 27, who helped organise the show of solidarity in Taipei joined by Hong Kong activists, a Chinese dissident and Taiwan students.

“We don’t want to just talk about it online. We want a pan-Asian alliance for democracy.”

A hashtag that began in April as a backlash to Chinese nationalist attacks on a Thai celebrity for a perceived slight to China shows signs of turning into a bigger movement uniting like-minded activists.

Why milk tea? The light-hearted name represents a shared passion for sweet tea drinks in Thailand, Hong Kong and Taiwan.

Wong tweeted support for the Thai protesters, while users on LIHKG, a social media forum used by Hong Kong demonstrators, also called on people to highlight the call of the Thai protesters for greater democracy and the departure of Prime Minister Prayuth Chan-ocha, a former junta leader.

“The show of solidarity between different pro-democracy groups in Asia reflects a greater intensity and camaraderie,” Parit ‘Penguin’ Chiwarak, 22, one of the Thai protest leaders, told Reuters.

Some Thai students have shown support for Hong Kong activists as Beijing has tightened its grip and for the Taiwan’s ruling Democratic Progressive Party (DPP) in the face of increased Chinese rhetoric over what China views as a breakaway province.

“The situation in Thailand isn’t so different from Hong Kong or Taiwan, which are under pressure from the authoritarian government of China,” said Rathasat Plenwong, 24, a student protester with a Milk Tea Alliance sign.

The Thai, Hong Kong, and Taiwan governments did not immediately respond to requests for comment on the alliance of activists and whether they were concerned about its impact.

“People who are pro-Hong Kong independence or pro-Taiwan independence often collude online, this is nothing new. Their conspiracy will never succeed,” Zhao said.

While the groups’ bonds may not concern China now, they were a clear sign of the challenge facing its influence in the region, Wasana Wongsurawat, a Chinese history professor at Bangkok’s Chulalongkorn University, told Reuters.

“It’s amazing that the Hong Kong and Taiwan bond expanded into the Milk Tea Alliance with Thailand, a sovereign country that doesn’t even list Chinese as a national language,” she said.

Use of the hashtag peaked in April when Chinese internet users hit back against attacks on the Thai celebrities who had appeared to suggest that Hong Kong was a state and that Taiwan was not part of China.

While a few people have promoted it almost daily since then, the Thai protests saw a big increase in its use – mostly on Twitter, but also Facebook, TikTok and other platforms.

Data from a Twitter analytic tool showed the hashtag was used in more than 100,000 tweets on Sunday alone and nearly 200,000 times over the past eight days.

There have also been shows of interest from the Philippines, because of a dispute with China over the South China Sea, and India after border skirmishes with China since May.

Singaporean blogger and activist Roy Ngerng, who was found guilty of defaming Prime Minister Lee Hsien Loong in a 2014 blog post, was also in the crowd in Taipei.

“The Milk Tea Alliance became the common ground from which we can express our solidarity in humorous and safe spaces,” Ngerng told Reuters.

“Solidarity is taking on a more organisational and structural form.”