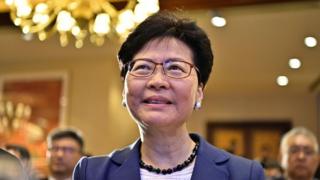 Hong Kong’s Chief Executive Carrie Lam has been the face of the Hong Kong government throughout months of protests.

In press conferences she has defended the city’s police and called for anti-government protesters not to push the city into an “abyss”.

The extradition bill was her first serious challenge since being elected in 2017 as the city’s first female leader. At the time, she was not the popular candidate for the top spot.

However she was favoured by Beijing – and by those who decide who leads the territory. The chief executive is chosen by a committee of 1,200 people who are said to represent the city.

She won with a total of 777 votes, a number that has since become one of her nicknames in Hong Kong.

Ms Lam previously told the BBC: “I don’t think it’s a question of a number. The question is about legitimacy. The election committee itself is formed from a much larger electorate representing broadly all the sectors in society in Hong Kong.”

Ms Lam, a Roman Catholic, was born in Hong Kong and comes from a working class background.

The New York Times describes her as a “workaholic”, regularly sleeping just three or four hours a night.

She joined the civil service in 1980 after graduating from the University of Hong Kong.

During her time there, she was sent to the University of Cambridge for a one-year diploma course in Development Studies.

In 2004, she was appointed Director General of London Hong Kong Economics Trade Office – the city’s representation in the United Kingdom.

She returned to Hong Kong in 2006, climbing through the ranks.

Ms Lam gave up her British nationality in 2007 in order to serve as secretary for development.

Her husband and two children retained their British passports. Ms Lam’s husband resides in the UK along with one of their sons. The other lives in mainland China.

Ms Lam was Chief Secretary for Administration during the 2014 pro-democracy protests in Hong Kong, serving under then Chief Executive Leung Chun-ying.

After the protests ended, she held talks with five student leaders. The talks focused on the students’ demands that China reconsider its ruling on how candidates for elections are chosen.

She rejected the demands saying: “As far as their position is concerned I’m afraid we can only agree to disagree.”

Ms Lam was sworn into office by Chinese President Xi Jinping on 1 July 2017, the 20th anniversary of Hong Kong’s return to Beijing.

In her acceptance speech she said: “Hong Kong, our home is suffering from quite a serious divisiveness and has accumulated a lot of frustrations. My priority will be to heal the divide.”

She reportedly never backs down in a political battle, threatening to resign if she does not get her way. This tough stance has earned her the nickname the “good fighter” . 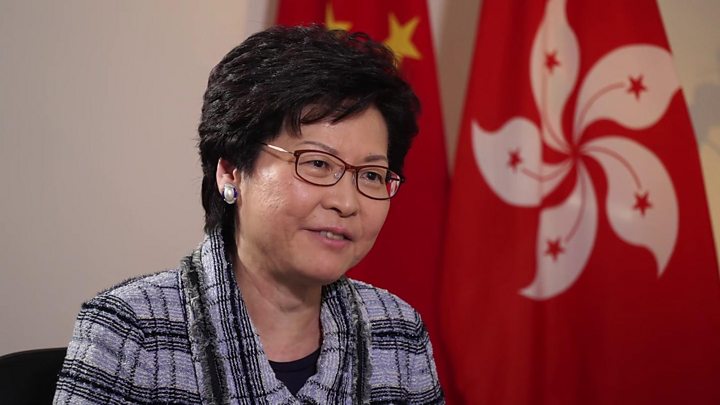 But her time in office has been marred by the controversial extradition bill proposed in 2019, which she argued was necessary to protect the city against criminals.

It was introduced after a high-profile case where a Hong Kong man was accused of murdering his girlfriend on holiday in Taiwan but could not be extradited.

However many people felt that the law could be used to target political opponents of the Chinese state.

Millions of people have marched on the streets of Hong Kong over the past two months.

Despite Ms Lam announcing that she would suspend the extradition bill, protesters have still called for it to be completely withdrawn.

He told the South China Morning Post: “She needs to come up with feasible ways to defuse the crisis.”

Former Hong Kong governor Chris Patten told the BBC: “What’s clearly needed is a process of reconciliation. It’s the only way I think you’ll put a cap on this and get back to peace and stability in Hong Kong.”