MINSK/MOSCOW (Reuters) – Belarusians chanting “Step down!” filled the centre of the capital Minsk on Sunday in the biggest protest so far against what they said was the fraudulent re-election a week ago of longtime president Alexander Lukashenko.

Russia said it would offer Lukashenko military help if necessary, but there was no visible police presence at the protest, which attracted around 200,000 people, a Reuters reporter estimated. At least two protesters have died and thousands have been detained in a crackdown since the vote.

The atmosphere at the rallies, which wrapped up late into the evening, was celebratory on the whole, with people carrying the red and white flags used in Belarus after the 1991 breakup of the Soviet Union before Lukashenko restored the Soviet version four years later.

“We all want Lukashenko to step down,” said a 31-year-old worker who gave his name as Alexei. “For now we are asking, but we will get sick of asking.”

Opponents of Lukashenko, in power for 26 years, say the vote was rigged to disguise the fact that he has lost public support. He denies losing, citing official results that gave him just over 80% of the vote.

The Kremlin said Russian President Vladimir Putin had told Lukashenko Moscow was ready to assist Belarus in accordance with a collective military pact if necessary and that external pressure was being applied to the country.

It did not say where from.

Russia is watching closely as Belarus hosts pipelines that carry Russian energy exports to the West and is viewed by Moscow as a buffer zone against NATO. Lukashenko and Putin have spoken twice this weekend.

Shortly before the opposition protest, there was tight security as Lukashenko’s supporters gathered in central Minsk for the first time since the election to watch him give a fiery speech.

Lukashenko, who has alleged a foreign-backed plot to topple him, said NATO tanks and planes had been deployed 15 minutes from the Belarusian border. NATO said it was closely monitoring the situation in Belarus, but that there was no military build-up at the country’s western border.

“NATO troops are at our gates. Lithuania, Latvia, Poland and our native Ukraine are ordering us to hold new elections,” Lukashenko said, adding that Belarus would “die as a state” if new polls were held.

“I have never betrayed you and will never do so.”

The Belarusian army will hold drills in the west of the country from Aug. 17-20, Russia’s RIA news agency reported.

Sviatlana Tsikhanouskaya, Lukashenko’s opposition rival in the contested election, fled to neighbouring Lithuania on Tuesday. She had called for the “March of Freedom” through Minsk and in other towns and cities on Sunday in support of an election recount and is forming a national council to facilitate a power transfer.

Maria Kolesnikova, an opposition politician who has allied with Tsikhanouskaya, referred to Lukashenko as “the former president”, said he should quit, and appealed to state officials to abandon him. 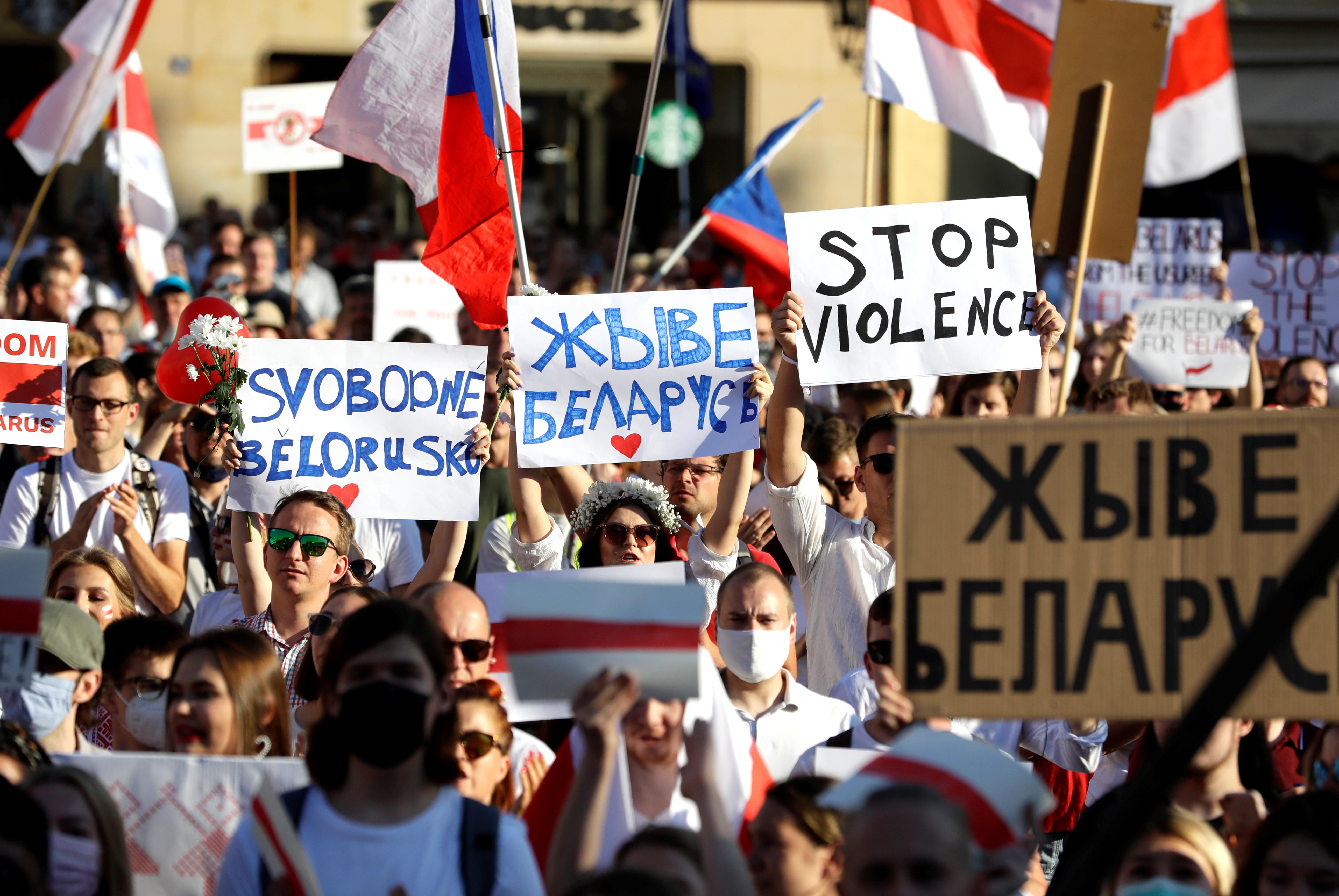 “This is your final chance to overcome your fear,” she said. “We were all scared too. Join us and we will support you.”

Thousands of people took part in anti-Lukashenko protests in other towns and cities. Crowds also gathered in Prague and Warsaw.

The Belarus Interior Ministry said there were no arrests at the rallies, although local media reported a few people had been detained.

State employees, including some police officers and state TV staff, have come out in support of the protests and some of the country’s biggest state-run plants, the backbone of Lukashenko’s Soviet-style economic model, have been hit by protests and walkouts.

Around 5,000 people attended an earlier pro-Lukashenko protest, a Reuters reporter estimated. The Belarusian Interior Ministry put the number at 65,000.

“The motherland is in danger!” one speaker told the crowd, who chanted: “We are united, indivisible!”

“I’m for Lukashenko,” said Alla Georgievna, 68. “I don’t understand why everyone has risen up against him. We get our pensions and salaries on time thanks to him.”

The first leader of independent Belarus who helped oversee the Soviet breakup told Reuters Lukashenko, a one-time manager of a Soviet-era collective farm, had been badly shaken but could still hang onto power with Kremlin backing. 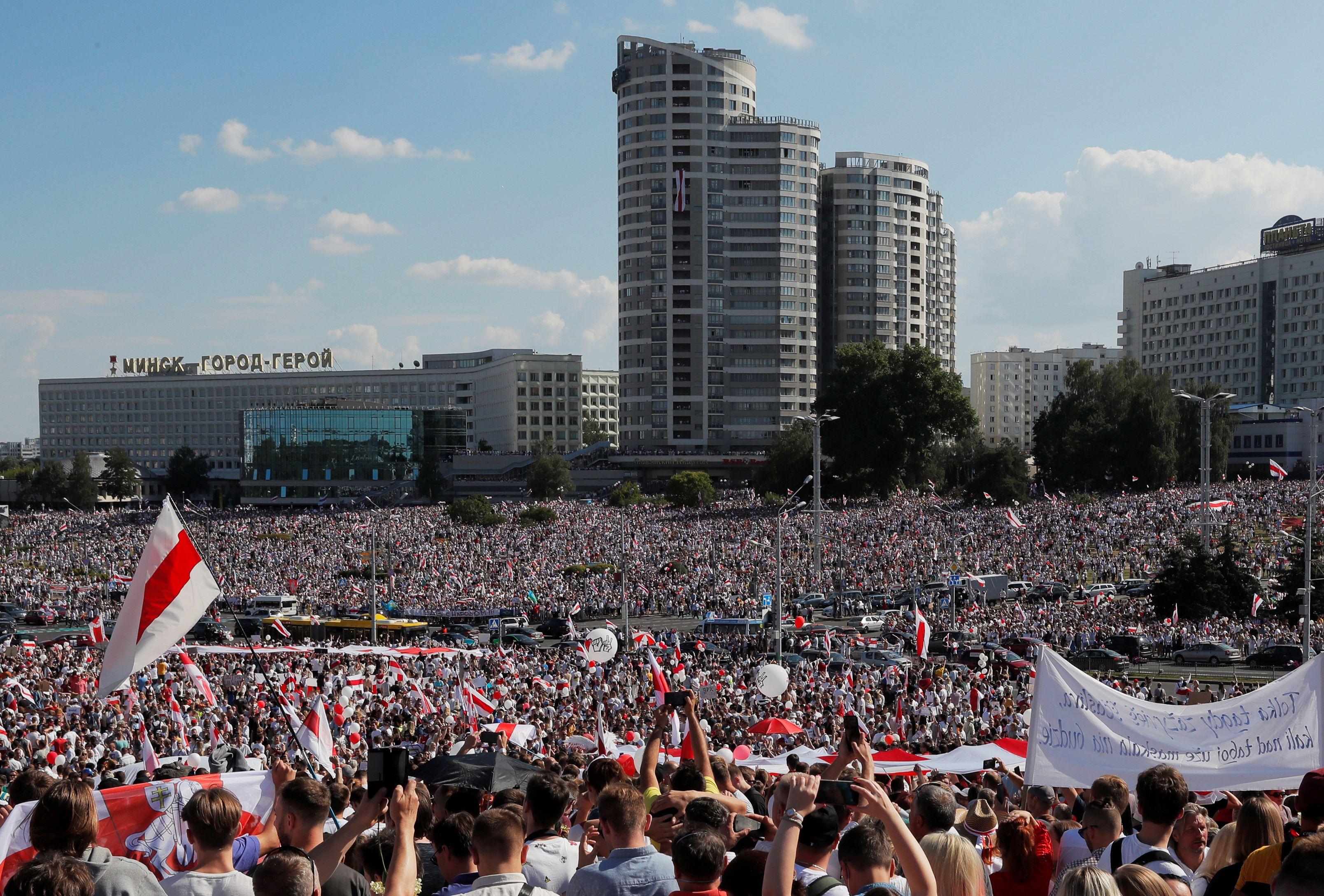 Stanislav Shushkevich, 85, an old opponent of Lukashenko, dismissed the idea of Russia sending in troops to prop Lukashenko up, saying he had a large, obedient army and well paid loyalists around him.

The Czech prime minister urged his EU counterparts to help, recalling the crushing of Czech protests by a military invasion led by Moscow in 1968 as well as the peaceful overthrow of communism in 1989.

“Belarus must not experience what we had in 1968,” Andrej Babis tweeted. “(The) EU must be active, support Belarusians (and) not to be afraid to stage a similar velvet revolution model (as in) 1989.”

The EU is gearing up to impose new sanctions on Belarus in response to the crackdown.