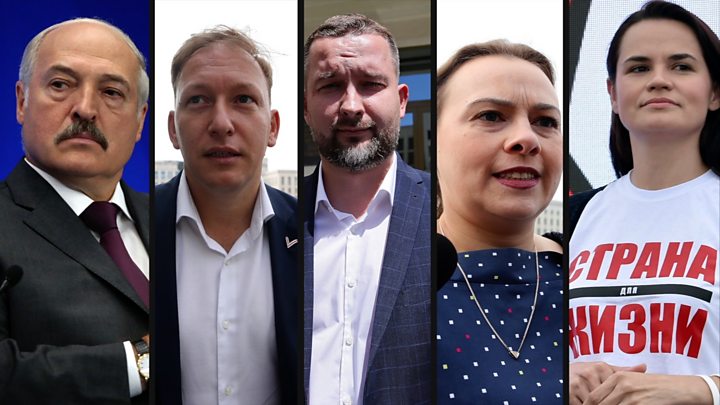 Belarus has only ever had one president and Alexander Lukashenko, who has held the position since 1994, is running for office again on Sunday.

The man once dubbed “Europe’s last dictator” is facing perhaps the biggest-ever challenge to his rule – from Svetlana Tikhanovskaya, a political novice. She says she is standing “out of love” for her jailed husband Sergei, but she also embodies a thirst for change in society.

Who is challenging Lukashenko and what do they want?

The campaign for this election had an unexpectedly lively start as surprise challengers to Mr Lukashenko – video blogger Sergei Tikhanovsky, banker Viktor Babaryko and ex-diplomat Valery Tsepkalo – attracted thousands to their nomination rallies.

This was unusual in a country normally considered quite politically apathetic.

But all three were disqualified from the race, with Mr Tikhanovsky and Mr Babaryko ending up behind bars. Now, Svetlana Tikhanovskaya has picked up the baton and the three campaigns have merged to back her candidacy.

A teacher and housewife, Svetlana’s primary goal is to end Mr Lukashenko’s rule and hold a new democratic election within six months.

She has been joined in her campaigning by Mr Tsepkalo’s wife Veronika, and Mr Babaryko’s election agent Maria Kolesnikova.

The “female trio”, as they are popularly known, advocate peaceful change, use inclusive rhetoric and steer clear of divisive political issues.

Svetlana gathered the largest rally in a decade in Belarus on 30 July, with an NGO estimating attendance at over 60,000 and even the police admitting a crowd of close to 20,000.

Why has Lukashenko been in power for so long?

Experts view Mr Lukashenko as an authoritarian populist who claims legitimacy through grassroots support, rather than international recognition.

None of the previous elections he won was found free and fair by Western observers. Yet in even the most controversial poll, in 2010, where he won nearly 80% of the vote, he most likely had the support of the majority (51%), a respected independent pollster IISEPS said. The lowest percentage of the vote he has ever won was 75%.

Analysts believe there are several factors behind his apparent loss of popularity this time round: fatigue from his 26-year rule, the country’s economic woes and, most importantly, his dismissive handling of the Covid-19 outbreak, which angered the public.

Is Belarus still an ally of Russia?

Belarus and Russia have historically described themselves as brotherly nations.

Mr Lukashenko came to power on pro-Russian slogans and was at the root of the union state established in 1999 – an agreement allowing the citizens of each country to freely travel to and live in the other, among other things.

Since then, he has manoeuvred to hold on to privileged access to Russian resources and markets, using fraternal rhetoric.

His fortunes changed in 2018, however, when Moscow started pushing for closer integration in earnest.

In this election campaign, Mr Lukashenko presented himself as a protector of independence and cast his rivals as “puppets” of Russian oligarchs.

Russian media initially showed little interest in the campaign and Kremlin spokesman Dmitry Peskov said his country had “no candidates” of its own in the election.

But tension escalated on 29 July when Belarusian police detained 33 Russian men and accused them of being mercenaries from the Wagner private military company, saying they had arrived to “destabilise” Belarus and were suspected of collaborating with Mr Tikhanovsky.

Russia denied that, and alleged the group was merely travelling via Belarus to Turkey. Moscow later strongly demanded that Minsk release the men.

It is not clear what their real mission might be.

According to political analyst Artyom Shraybman, Mr Lukashenko’s posturing as a fighter against Russian meddling has earned him no extra popularity points and the “Wagner” incident failed to scare voters, who turned out in numbers for Ms Tikhanovskaya’s rally shortly after the detention.

The results of several online polls on Mr Lukashenko’s likely support have turned into a popular protest meme and earned him the mocking nickname “Sasha 3%” on social media.

Three percent in votes is obviously an exaggeration, but there are no credible independent polls in the country and few believe the high support figures circulated by pro-government polls – the Ecoom Centre predicts 72.3% for Mr Lukashenko.

There will be just one exit poll by the CIS-owned TV company Mir and very few observers to check the results of the vote count on 9 August.

Few doubt that Mr Lukashenko will use all means at his disposal to stay on – from loyal election officials, flawed electoral legislation and the controversial practice of early voting, to the use of force to suppress potential protests.

He has made it clear on several occasions that he may use troops to stop “unrest” if needed.

Given the apparent lack of a clear post-election plan on the part of Ms Tikhanovskaya’s camp if Mr Lukashenko is declared the winner, pundits tend to agree that a crackdown on the likely protests in response might enable him to hang onto power in the short term.

They also note, however, that this scenario will turn him into an international pariah again and seriously weaken his negotiating position in “integration” bargaining with Russia.

It will also make him totally dependent on the uniformed state agencies, rather than popular support for the rest of his tenure.